In the Garden of Beasts

By June 1933, the “Nazis”—a new word in the world’s lexicon—had held power in Germany for almost six months, and were not expected to last, unlikely characters as virtually all of them were. The American ambassador to Germany had left his post shortly after Franklin D. Roosevelt’s inauguration, and filling this post turned out to be a minor problem for the new president, because no one in the diplomatic establishment wanted it. Roosevelt had to “beat the bushes” with unwonted vigor to find an emissary. So finally, he secured assent to man the post from a candidate from very far outside the usual “farm” of blue-blooded New England WASPs from whom ambassadors to such important countries normally were recruited. Roosevelt picked a historian—a North Carolinian by birth, specialist in Southern history and biographer of Woodrow Wilson—who at that time chaired the History Department at the University of Chicago, to dive with his whole family into the seething cauldron that Germany turned out to be during the ensuing four-and-a-half years.

And this mild-mannered Southern historian, with some well-justified trepidation, did just that, to the enduring benefit of those who in later years seek understanding of just who was doing what to whom in that place and those times, and why, and how. William E. Dodd, “yeoman historian” though he was deservedly styled by his biographer, never published a memoir of his 1933-1937 service in Berlin, but his daughter Martha, who with his wife and son accompanied Ambassador Dodd to his European posting, wrote memoirs, and novels, from which much can be gleaned concerning the view an American might gain of events in the same times and places. And Dodd himself, of course, left a trove of dispatches to the US State Department that serve very well as a chronicle of his own perception of events, and after his retirement and return to America, Dodd availed himself of a “pulpit” from which to declaim messages that he felt must be conveyed after his service and the undoubtedly unique perspectives it afforded him. 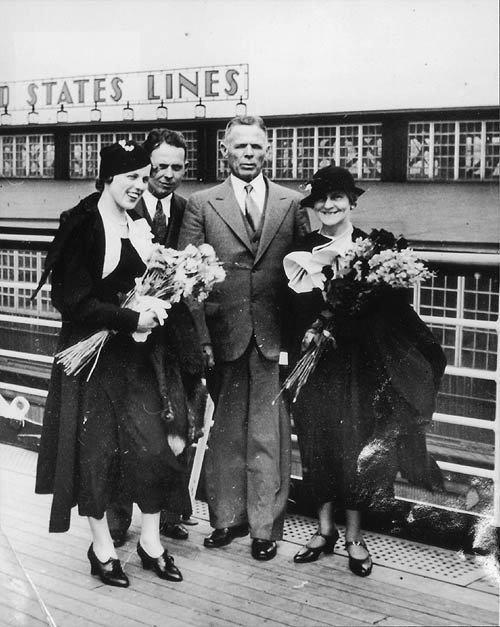 But this book is not about Dodd, nor by any means entirely even him and his active and interesting family members. And it is of course not by Dodd, having been written some sixty years after his death. It is, rather, by a best-selling author of “novelized history,” and this book itself enjoyed many weeks at the very top of the New York Times’s Bestseller (Non-Fiction) list, making it perhaps the most-successful book yet reviewed in Inconvenient History. For anyone interested in history, revisionist or otherwise, it offers a wealth of impressions and experiences from times and places today much freighted with meaning in terms of subsequent events—including, of course, “events” celebrated primarily in propaganda and mythology since pressed into the service of national and ideological agendas in the present day.

According to Author Erik Larson, and I do not doubt him on this score, Dodd came away from his four-and-a-half years of representing the US government in Berlin with a loathing and fear of the new masters of Germany that built slowly from his arrival as an open-minded historian who had developed a love of German culture, the German language, and perhaps even German people from his student days in Leipzig before the First World War. Dodd was not only fluent in German, he had actually written a biography of Thomas Jefferson in German during his long and distinguished academic career that preceded his appointment. He was, in fact, a dissenting revisionist in his own right: at a time when an unbiased posture toward the behavior of the Confederate rebels spelled an early and ignominious end to the career of any academic, Dodd specialized in just such an illuminating perspective, and ultimately reaped success from this audacity. Harry Elmer Barnes would have found a kindred soul in this scholar of history. Dodd’s views on blame in the First World War are not reviewed in this book, but I suspect they may have been such as Dodd may have found it most-politic to keep to himself, busy as he was with War between the States revisionism.

The book by no means limits itself to Dodd’s own experiences, but excurds freely into experiences of his very-active daughter, Martha, with various (attractive, young) men, and even on some occasions into observations that the author has drawn directly from authoritative history, where it serves to provide context to what the main “characters” of this account undergo in their own rights. The end product of this style is an account that is notably more-engaging than conventional history, and affords the more intrepid sort of history aficionado the opportunity to extract understanding at a level that is simply unavailable to those holding to more-rigorous standards of historical exposition and inference. Readers respecting only “established facts” might do well to pass this book up; those seeking levels of experience transcending what can be objectively supported in accounts rendered by one person about yet another person(s) they never even met, on the other hand, may find Larson’s confection highly rewarding. It is, assuredly, neither fiction nor non-fiction.

At the end of this slowly and magnificently building story, Ambassador Dodd returns to the United States a changed man. Upon his initial posting, it appeared as though Dodd planned to return to the appointment he held at the time in the History Department of the University of Chicago. Oddly, the narrative quite neglects this expectation, possibly because after four-and-a-half years, Dodd had attained an age at which retirement was much to be expected, at least at the time: 68. Or perhaps the death of his wife less than a year after his return affected his career decisions.

Be all this as it may, after his return to the US at the end of 1937, Dodd took up a “career” as a clarion to alert Americans to the “threat” Nazism—by then firmly established in indefinite control of the government of Germany—posed to America, and indeed to “mankind” in general. Both before and after the death of his lifelong mate, also named Martha, he maintained a schedule of appearances before groups across the United States that must have been punishing indeed for a man of his years. A cynic such as myself is tempted to infer some level of financial need in the enterprise, but that might be mere projection on the part of a person whose own success at providing for his material needs can at best be labeled no better than “marginal.”

Dodd delivered himself of a scathing peroration against his (official) German hosts as early as his landing at New York on his final return to his homeland in early 1938. It was filmed and recorded in videos that are still today to be found on YouTube. He was by that time a “private citizen” of the United States by a matter of no more than a few days, and his subsequent agitation against the holders of governmental power in Germany of the times occasioned several heated complaints delivered to the US State Department by Dodd’s former hosts. These complaints were all dismissed with a refrain to be heard even to the present day that America is a land of “free speech,” in which anyone (no longer a governmental official) may espouse any view he might choose without interference from the government. Of course, this policy, to the extent it is still respected in the United States, continues to arouse frustration, bafflement, and suspicion on the part of persons not accustomed by experience to the compliance with such a principle.

Dodd’s imprecations against the by-then-surprisingly durable masters of Germany seemed to rise in pitch and ferocity during the almost three years he pursued his new calling before his death in 1940. It is easy to imagine that this might have been prompted by his desire for a hearing—bearers of not-terribly-bad news can experience difficulty in gaining attention, as others, such as William Randolph Hearst, experienced (and overcame). Larson reports that Dodd frequently addressed Jewish groups on the subject, inviting speculation on the part of suspicious persons such as this reviewer as to who his paymasters might have been. By June 10, 1938, he was telling the Harvard Club, in a speech, that Hitler’s intentions were “to kill them all,” meaning the Jews at least of Germany, and perhaps of Europe. Dodd’s later mental acuity also comes in for some telling criticism according to Larson’s account, especially in the recording of his General Consul throughout his Berlin tour, George Messersmith. Messersmith noted, a couple of years before Dodd’s death, an “organic decline” in the intellect of his former boss. What is called senility would be neither notable nor culpable in a person in that era who had attained the advanced age that Dodd had.

In the end, the cataclysmic war that Dodd foretold came to pass, as what in retrospect appears in the case of the US very much a self-fulfilling prophecy, not unlike other wars and human events of popular impetus in general.

Author Larson gently toes the lines that are clearly marked out for anyone venturing to publish a book in the present day on the history covered in his narrative. But, especially in view of those lines (to be toed) and the grave consequences awaiting anyone who does not deftly and persuasively honor them, the remaining tale, as a product of its own times, is compelling and quite possibly informative if decoded according to the cyphers that prevail in the times of its publication.

Embedded in its pages is a veritable bonus romantic novel covering the exploits of Dodd’s 27-year-old daughter Martha, a woman of conspicuous “sexual appetite,” that might clutter the history involved if it did not involve partners who embodied so much historical value in their own rights. Just one example is Rudolf Diehls, the first head of the GeStaPo, who survived not only the Second World War, but the witch trials of Nuremberg that came in its train.

A fascinating read, for devotees of revisionist and mainstream viewpoints alike.