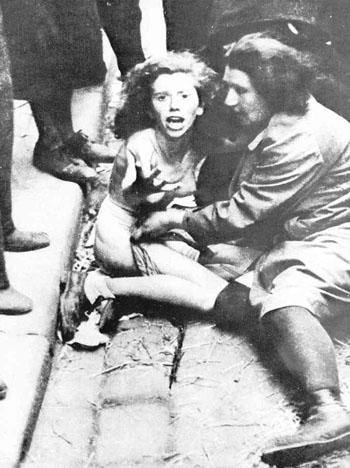 Tradition of atrocities: A Jewish girl raped by Ukrainians in Lvov, Poland, in 1945

The photograph shown here, with this factually untrue caption, appeared in Time magazine, February 22, 1993. In fact, this photo was taken by German photographers in the Ukrainian city of Lviv (Lvov) shortly after its capture by German forces on June 30, 1941. There is no evidence that the woman shown here was ever raped.

In response to numerous letters of complaint, Time magazine eventually published a sort of apology (April 19, 1993). “Except for the date,” the influential weekly explained, “the information describing the events in the photo was obtained from an employee of a Holocaust museum in Israel.”

Chaos in the form of pogroms, rapes and killings swept the town at that time. The picture is one of a series showing women being stripped, harassed and chased by civilians. One school of thought holds that the women were Jewish victims of the pogroms in Lvov…. Other historians insist that the majority of the women pictured in the series of photographs were mistresses the Soviets abandoned when they fled Lvov to escape the Germans troops. The defenseless collaborators were then attacked by resentful residents for consorting with the Soviet enemy.

This same photo appears in the 1989 book WWII: Time-Life Books History of the Second World War (p. 141) with a caption reading: “A rape victim in the city of Lvov cries out in rage and anguish as an older woman comforts her.”

Shortly before the German capture of the city on June 30, 1941, Soviet secret police summarily killed an estimated 2,300 men, women and children. When the Soviets abandoned the city, many enraged citizens vented their anger on those who had helped the hated oppressors. Many of the victims of this popular outrage were Jews, who had tended to support Soviet rule.

This photo, probably taken on July 1, 1941, almost certainly depicts a victim of this vengeful, pogrom-like outburst in which, according to some historians, several thousand Jews were killed.

Commenting on the circumstances of this photo, one Ukrainian-American writer has claimed that “the action was staged by the Nazis for the purpose of shooting a newsreel.” (Edmonton Jewish Life, March 25, 1993, p. 7.) There is no evidence whatsoever to support this scurrilous contention.

"A new scientific truth tends to prevail not because its opponents become convinced and announce their conversion, but far more because its opponents gradually die out, and are replaced by those of the upcoming generation, who are already familiar with that truth."
—Max Planck, German Physicist, 1858-1947, Nobel Prize laureate, in: Wissenschaftliche Selbstbiographie: Physikalische Abhandlungen und Vorträge, Band 3, (Braunschweig: 1958), p. 389.