Inside the Gas Chambers

Inside the Gas Chambers, by Carlo Mattogno. The Barnes Review, Washington, DC, 267 pp. $25 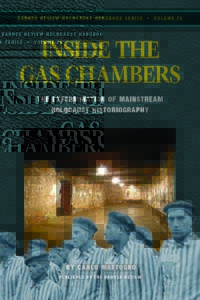 Inside the Gas Chambers: The Extermination of Mainstream Holocaust Historiography by Carlo Mattogno.

The “Holocaust debate” is, at least for the defenders of the regnant account, something of a kabuki dance. The tiny, furious cadre of revisionists dances impotently around the lumbering bulk of the defenders, throwing vicious punch after punch and landing them solidly with practically no visible effect on the immovable monolith. The monolith, for its part, contents itself mostly with the occasional utterance of epithets like “denier,” “conspiracy theories,” “anti-Semitic,” “neo-Nazi,” or just plain “Nazi.” But now and then, the holders of the impregnable heights deign to go through the motions of refuting or even opposing the fulminations of the indefatigable corporal’s guard that presumes to attack its iron grip on opinion and information. Even these feigned responses to “denial” or—on a good day—“revisionism” are but listless shadow-boxing, in which well-paid hacks gather for colloquia in expensive venues, there mostly to ignore the particulars so stridently proclaimed by the revisionists, never to address any of them by name, and for the most part to pass off mere repetitions of their own observations as vigorous counterattack. This suffices for their benefactors, and insults and infuriates the revisionists who seek at least counterargument, if not explicit acknowledgement of their personal existences.

From this process, a good deal of what might be called “literature” has arisen from the higher (funded) side of this exercise, and a somewhat lesser volume of impassioned, strenuous, even tedious and at the same time inspired counterattack from the revisionists in their forever unrequited quest for engagement with the behemoth that outweighs them a hundredfold. The three musketeers intrepidly parrying and thrusting with their foils at a column of Merkava tanks.

The defenders’ broadsides are duly purchased in hardcover and proudly displayed on the shelves of bookcases in homes and offices. The attackers’ fusillades, if not downloaded free from websites, are sparsely bought in economical paperback form, and kept out of places where the opinions they imply will not catch the eye of any of those many who would swiftly develop a jaundiced view of their owners. Neither, it turns out, is much read by their possessors, who are in any case most of them in a state of carefully preserved ignorance as to just what the other side is going on about lately.

Carlo Mattogno, il maestro massimo of Holocaust arcana, has expended on a recent initiative of the Holocaust industry, a quantum of energy and insight that for an average person (this reviewer, for one) would represent the greater part of a life’s work. For Sig. Mattogno, compared with the massive work he has already done and published on the revisionist side, however, it seems the effort might be closer to that exerted by a cow brushing pesky flies off her back with her tail. I have not perused the work(s—two of them actually, in succession) that our maestro demolishes in Inside the Gas Chambers, but the numerous quotations he makes from them leave me with the impression that his exhaustive, scrupulous attentions are not even quite deserved by the insipid scrivening that constitutes the great bulk of the works he flatters with his opprobrium.

The unfortunate objects of his withering attentions are two books, published in 1986 and 2011, that together form something between a prequel/sequel and a series, as their titles imply: first, Nationalsozialistische Massentötungen durch Giftgas (National Socialist Mass Killing with Poison Gas) and 25 years later, Neue Studien zu Nationalsozialistischen Massentötungen durch Giftgas: historische Bedeutung, technische Entwicklung, revisionistische Leugnung (New Studies in National Socialist Mass Killing with Poison Gas: Historical Meaning, Technical Development, Revisionist Denial). The titles almost rhyme, sort of. As Mattogno repeatedly points out, the authors of the later book, while going through the motions of updating or merely extending their own side of the argument, fail conspicuously (and, it is suspected, deliberately) to update or extend their recognition of the “denialist” oeuvre that they pretend to debunk. Fortunately for those who don’t, as Mattogno does, read German, the earlier of these two books was published in 1994 in an English translation as Nazi Mass Murders. The latter work, it appears, has not been translated to the most-widely spoken Western language, at least not yet.

But Mattogno’s masterful riposte, fortunately, has been translated to English from its original Italian and, I have learned, also to German, which version in fact constituted the source for the (English) version reviewed here. Thus, the present work is a translation of a translation, though I have been assured that Mattogno himself has vetted the English translation as faithful to his original (Mattogno reads English, but wisely does not author in any other than his native language).

The English translation is credited to one Henry Gardner, and of his work here reviewed, I must say that he (together with those working with him) must be a master of the translation craft. The end result, unlike so many translations I have had the misfortune to read, is a coherent, eminently readable, not to say persuasive, presentation of rather intricate, technically challenging material. Nowhere did I experience that nasty feeling I have come to expect of mediocre translations where the text just sort of trails off into inchoate nonsense (well, maybe one place, but that’s an incredibly high score for material of this kind, and is as likely due to my sometimes-too-close reading as to any deficiency in the end product). I make these remarks as one who has himself undertaken translation of comparable material, and been most thoroughly humbled in the process.

Speaking of translation, Mattogno has written a critique of a work that as yet has seen the light of day only in German (an English translation would seem to be expectable). But for the numerous (translated) quotations, this critique could be meaningless, at least to someone who did not have, or was not able to read, the German-language “target.” There is, of course, the earlier (1986) work, which is available in English, but the quotations are (translated from) the later work. So … to a cynic, the kabuki dance would seem to be layered still one level deeper.

Regardless, this book affords a tour of the “heavy lifting” of revisionism, something in which its author has long held a leading position. It amounts to a study in demolition—here, of course, of the flaccid assertions of paid hacks who deliver a simulacrum of refutation of the ineluctably growing body of revisionist criticism of the petrified propaganda that is the legally enforced account of wartime National Socialist dealings with Jews and other opponents. As such, it is a volume for “enthusiasts”—those who “can’t get enough” of the revisionist riposte to the ubiquitous lies that today provide cover for Israel’s territorial aggrandizement, oppression of non-Jews within its control, obscene claims to being a “light unto the nations,” and all the rest of the transparent posturing that today undergirds the hijacking of America’s priceless legacy and irresistible power into the service of Jewish agendas.

When, if, and as the “Neue Studien” comes out in English, this work will gain considerable value for those whose interests and abilities don’t lead them to delve into German-language disquisitions by the centurions of the Holocaust Legend. In the meantime, it is something to “lay in” against that day, and to peruse with close attention for those whose interests center on the weakness of the defense of the Holocaust Legend through junket-colloquia in the former capital of the Third Reich.