A favorite tactic of Holocaust cultists has been to exploit the power of images—photographic and “artistic”—to convey and suggest the horrors, real or imaginary, of the Holocaust. Oftentimes our opponents have resorted to miscaptioned or misleading photos to, in the words of the United States Holocaust Memorial Museum (USHMM), “counter the hate-mongers and revisionists.” So brilliant, so manipulative, has the propaganda campaign been, that today the average viewer sees horror and death where none is shown to exist. A case in point is movie reviewer Gene Siskel, who was so moved by Schindler’s List that he described a scene in which “gas chamber fumes envelop[ed] naked Jewish women.” Very poignant—except it never happens in Spielberg’s film (see Internet Roundup, SR 41).

The USHMM has begun another fundraising campaign to celebrate its fifth anniversary, and the brochure that comes with the begging letter features a young girl with a number card draped around her neck and the yellow star inscribed “Jude” on her chest. We have all been primed to equate this image with certain death at Auschwitz. Only on closer examination (of another page of the brochure) do we learn the happy—and quite unexpected—news that the photo is of a survivor. The young lady spent the war at Theresienstadt and today lives in the United States.

The USHMM contributes to the deluge of misleading images on its Website as well. Photos of empty cans of Zyklon B (which no doubt helped the Germans keep the young girl above alive) are exhibited as evidence of the gas used to “kill” millions. The Museum’s Website shows, not the image of a gas chamber that Robert Faurisson has challenged them to produce, but merely a picture of the now famous, thanks to CODOH scholar Samuel Crowell, and quite harmless, indeed life-preserving, Majdanek air raid shelter door. The method and purpose of the Holocaust cult’s manipulation of these images is clear: to transform images that present no evidence of gassing or extermination—if anything are evidence against it—into powerful reinforcement for groundless Holocaust assumptions that have already been instilled in the public consciousness.

In a unique attempt to combat the claims and images of German turpitude, from the accusations of genocide to a myriad of other war crimes claims, CODOHWeb has established a new area to archive “Allied Wartime Atrocities.” Fast becoming one of the most frequented areas on the Website, our “Atrocity” page documents—in a growing number of words and images—numerous atrocities committed against the civilians and the military forces of the Axis and catalogues these offenses by country. 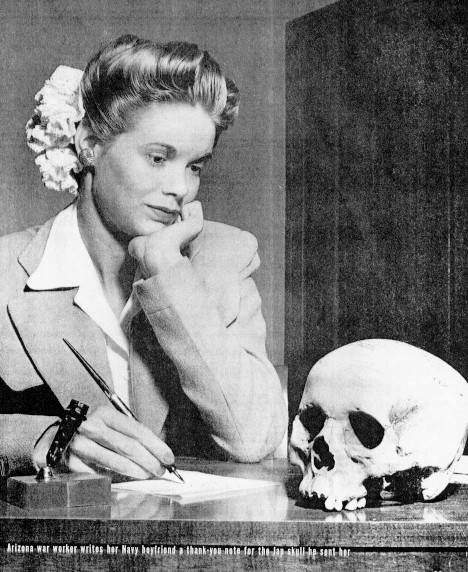 “Arizona war worker writes her navy boyfriend a thank-you note for the Jap skull he sent her.
Life (March 22,1944)

The visitor to CODOHWeb’s “Atrocity” page is at once confronted with a photograph of an attractive young woman writing a thank-you note to her Navy boyfriend— “for the Jap skull he sent her” (our thanks to Fritz Berg for making it available). As she pens her note, she gazes fondly at the skull, which came from the corpse of a fallen Japanese soldier and which the young lady, the accompanying caption tells us, thus has dubbed, affectionately, Hirohito. CODOHWeb has included the original caption, which came with this “Picture of the Week” as it appeared in Life magazine in May of 1944. What wouldn’t our friends at the US Holocaust Memorial Museum give for such a picture of, say, Ilse Koch or Heinrich Himmler—and even better, such a picture of any pretty young German woman unabashedly displayed in one of the Third Reich’s mass circulation magazines!

CODOH has begun to post the documentary record and the photographic images of numerous Allied atrocities, including those of the mass deportation of 15 million Germans at the end of the war, British flyers machine gunning lifeboats, and the mass graves left behind by the Soviets. It will soon include a gallery of images of horrors that the “good guys” wrought. Unlike most imagery the Holocaust cult exploits, these images present direct evidence of atrocities rather than operating by suggestion and circularity.

The presentation of the “Allied Atrocity Page” is not without consideration of those nationalists and veterans who served in our military. As Webmaster David Thomas comments, “We present this page not as a condemnation of our country, nor of the young men that we call on from time to time to go forth on our behalf to kill and be killed... We offer it in the spirit... [of recognition] that the deaths of all humans are equally important.”

Nevertheless, we can’t help but reflect on how Americans have been persuaded to crowd one national museum on the Mall in Washington—the U.S. Holocaust Memorial Museum—to gape censoriously at alleged German atrocities, while only a couple of years before, when another national museum nearby—the Smithsonian—attempted to document some of the horrors of the U.S. massacres at Hiroshima and Nagasaki, the exhibit was bowdlerized after a national outcry.

CODOH means to get the entire truth out. Luckily we do not have to do this alone. We have been able to link to brilliant Websites which have documented, for example, “War crimes committed against the SS,” “The Internment of Japanese Americans” and even a Website which documents the US concentration camps set up for European-Americans.

The power of the Internet has enabled CODOH and revisionists world-wide to not only correct falsehoods, but to shine a light on those events which the victors would prefer forgotten.