Last issue, we announced the launching of the CODOH Bulletin Board into cyberspace (SR 56). Those who cannot visit CODOHWeb for lack of access to the Internet may well wonder what he was talking about. The CODOH “BBS,” or Bulletin Board, marks yet another first for revisionism. CODOH’s drive for open debate on the Holocaust story has reached yet another level, as a free forum for contending views on the controversy now exists.

Before one can fully grasp the importance of CODOH’s recent achievement, a little background is necessary. As readers of this column know, one of the most important and valuable areas on the Internet is the World Wide Web (WWW). I worked personally with Bradley Smith to establish CODOH’s Website in the fall of 1995. CODOHWeb has grown tremendously since that time and now offers a library of revisionist articles, photographs, and news stories.

Anyone who can access the Internet can participate in the newsgroup discussions as long as they have a program called a “newsreader.” Newsreaders allow you to subscribe at no cost to newsgroups so you can read newsgroup articles, as well as add, or post, your own. All major on-line services include newsreaders as part of their standard software.

Many of these anti-revisionists are or at one time were associated with the Holocaust Remembrance Website, Nizkor.

Personal attacks have driven many defenders of revisionism from the newsgroup.

The anti-revisionists choose to attack individuals rather than their ideas and typically are incapable of providing objective evidence of their position. Even though the air is thick with anti-revisionist hate, the group still averages over 200 messages per day, with a near 50-50 split between messages for revisionism and against revisionism.

Most of those who post to alt.revisionism treat the forum as something akin to combat, rather than debate or discussion.

On June 28th, it happened. David Thomas, CODOH-Web’s technical wunderkind, unveiled a CODOH Message Board which could be accessed directly from the CODOH Website. The rules and principles of the CODOH BBS were established by CODOH, not those who are committed to destroying revisionism. All comers are greeted by CODOH’s rules for participation in the Bulletin Board and a statement by Bradley on the necessity of goodwill for real communication.

This past summer has shown that CODOH-Web’s newest feature is its most popular. Net revisionists and antirevisionists alike have dropped in to make their opinions heard. At times persons on both sides have crossed the line of goodwill and found their messages removed from the board. Typical name-calling includes such words as “liar,” “idiot,” and “Nazi.” With the rules of good communication and civility now properly understood, both sides seem willing to come to the table.

Interesting discussions can be read that span the gamut of revisionist topics, from Friedrich Berg on diesel and cremation issues to unknown net revisionists and nonrevisionists on the Dachau “gas chamber.” 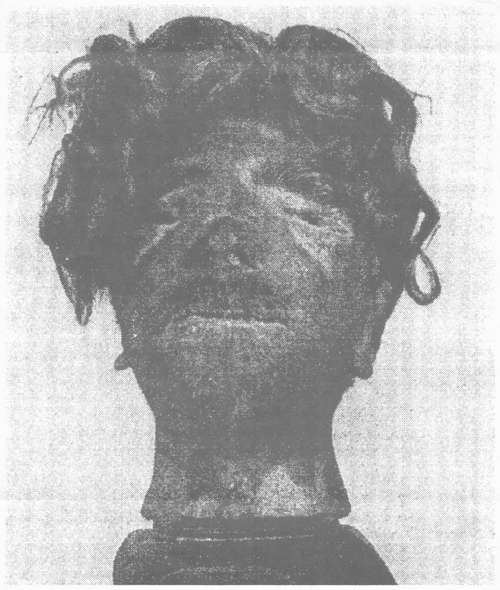 The shrunken head discovered at Buchenwald, maybe. There are many rumors about her origin. Some suggest the Amazon rain forest. Others argue she is a Berkeley precursor of the hippies. To me she resembles the photo of a lady who lived in the Transylvania town from which Elie Wiesel emerged. No matter—we must treat the photo with the respect it deserves.

The ebb and flow of the discussion is both interesting and enlightening (and at times infuriating). Antirevisionists are rarely willing to give up even the most outlandish Holocaust claims. One such zealot recently set out to resuscitate the shrunken head allegedly found at Buchenwald. This discussion resulted in the posting of a photograph of the shrunken head of Buchenwald.

Internet revisionists were quick to point out that revisionists have long known the photograph and have reproduced it themselves on numerous occasions (see Carlos Porter: Made in Russia: The Holocaust). Armed from the vast trove of revisionist intellectual weaponry on CODOH-Web, the net revisionists were able to argue Udo Walendy’s thesis that the head was in fact of South American origin.

One attentive net-revisionist pointed out what seemingly is the most obvious problem with the “shrunken head of Buchenwald”: “One might even say there must have been a hippie commune inside the Buchenwald enclosure.”

The photograph, originally posted by a devoted antirevisionist, turned out to be his undoing. Time and again on CODOH’s Message Board, the “antis” have had to beat such quick retreats. Meanwhile, with each passing day, many new people become aware of the controversy that surrounds the Holocaust—and many new minds are drawn to CODOH through our discussion forum.

A few years ago Professor Deborah Lipstadt called for a refusal to debate the revisionists. Clearly, many in the antirevisionist camp aren’t heeding her: The debate is going on at full volume all around us. Revisionism is today’s version of “the shot heard round the world.” While it’s aimed not at King George’s redcoats, but rather at censors and Holocaust hatemongers and myth-makers of every stripe, we at CODOH are striving for the same things our patriot forefathers fought for: liberty and truth.

The CODOH Bulletin Board can be accessed at: http://www.codoh.com/bbs [It's now called "The Forum" and is located at http://forum.codoh.com/; see the tab "Forum" on this site's top navigation bar; ed.]