The Simon Wiesenthal Center (SWC) of Los Angeles has once again smeared and slurred revisionists. It should come as no surprise to readers of Smith’s Report that SWC has done so by its continued hateful misuse of the “hate” label. Working from its own volatile equation (Hate + Fear = $), the SWC has now proclaimed that there has been an explosion of “hate” sites on the World Wide Web. Lumping together an eclectic medley that ranges from Holocaust revisionists to neo-Nazis, white supremacists, Aryan separatists, racist rockers, anti-tax advocates, and schools that offer training in genuinely terrorist activities such as bomb making and the like, the SWC estimates there has been a threefold increase of such sites in one year.

The SWC has recently catalogued the Web addresses of groups whom they oppose and compiled them in CD-ROM format (CD-ROM stands for “Compact Disc—Read Only Memory.” Its popularity stems from the fact that it can hold more than ten times the information on a standard floppy disc.) SWC is in the planning stage of distributing 5,000 CD-ROMs entitled “Racism, Mayhem & Terrorism: The Emergence of an On-line Subculture of Hate.” These discs are being sent to law enforcement agencies, educators, and in some cases to the public. Using this new high-tech form of blacklisting (see SR 50, “The New McCarthyism of Holocaust Orthodoxy”) the SWC is urging that Internet Service Providers (ISPs) drop Websites that depart from the SWC’s canons of political and historical orthodoxy.

Twisting logic, Rabbi Abraham Cooper, associate “dean” of the SWC, argues that blacklisting and elimination of dissent is actually the American way. Cooper said, “Drawing a line on where you don’t want your service to be used is as much an American way of doing business as our commitment to 1st Amendment rights.” Cooper may be correct; however, most Americans today detest the blacklisting and “witch hunts” of earlier times.

Despite the ongoing defamation of revisionists, the SWC’s latest message gives revisionists much to cheer about. For just as the SWC claims a 300 percent increase in “hate sites” in the past year, there has been a tremendous increase in what should be called “truth sites.” Revisionist activists, scholars, researchers and writers from around the world have joined together in cyberspace. The number of “truth sites” has grown phenomenally.

A quick rundown of these “truth sites” shows the growing importance of the Web for revisionism, and the futility of the SWC’s actions against intellectual freedom.

In 1996 John Ball posted important photographs and drawings on his Air Photo Evidence Site (see SR 37). Michael Hoffman came on-line with his Campaign for Radical Truth in History. His desire to shine a light into every dark corner of contemporary history quickly made him a target of the cyber-thought police, including Harvard-associated Hate Watch (see SR 38).

A collective of French revisionists brought the multilingual L’Association des Anciens Amateurs de Recits de Guerre et d’Holocauste (AAARGH) Website into being. The AAARGH site is complete with major archives dedicated to the works of Paul Rassinier, Robert Faurisson, and Serge Thion. The Foundation for Free Historical Research, or Vrij Historisch Onderzoek (VHO). established its own major site in cyberspace. They have posted such revisionist classics as The Rudolf Report and the contents of most issues of their journal, Vierteljahreshefte fuer freie Geschichtsforschung. 1998 has seen the birth of David Irving’s Focal Point Productions (see World Scope in this issue of SR for more information).

The SWC has described the situation on the Internet as an “explosion.” Indeed, they are quite correct—it’s an explosion of skepticism and doubt about the Holocaust. In SR 29 (December, 1995) we reported that CODOHWeb recorded over 1,500 hits in its first six weeks of operation. Today we exceed that number in a single day! Over half a million revisionist documents have been accessed on CODOHWeb alone during the past 12 months. The SWC has positioned itself as keeper of the Holocaust faith. In these times that’s not an enviable place to be. Arthur Schopenhauer once commented that “Faith and know ledge do not get on well together... they are like a wolf and a sheep in the same cage—and knowledge is the wolf which threatens to eat up its companion.” 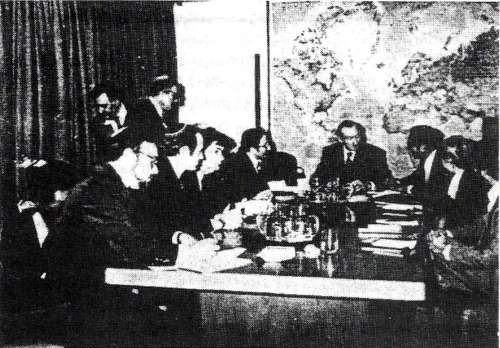 As recently noted in Smith's Report (no. 50, Internet Roundup) the Simon Wiesenthal Center has been elevated, if that’s the word, to the status of a nongovernmental organization with the United Nations. As the above picture (from a pre-1986 SWC brochure) shows, however, the leaders of this “Nazi hunting” group—Rabbi Abraham Cooper (far left) and Rabbi Marvin Hier, grinning just to the left of (gasp!) then UN Secretary General Kurt Waldheim—obviously missed out on a big collar years before Waldheim was banned from the United States on sham “war crimes” charges at the instigation of the World Jewish Congress. We wondered if the Simon Wiesenthal Center, under the patronage of the world’s number one phony Holocaust sleuth, was just too slow to unearth the bogus clues the WJC tracked down. We don’t think so. As a matter of fact our sources in Manhattan tell us that at that very time the dynamic rabbinical duo were following up a hot tip that Martin Bormann was lurking in a broom closet at the UN Secretariat.