Jews as Underground Fighters in the Second World War

William B. Ziff was a publisher and ardent Zionist publicist. In his 1944 book, The Gentlemen Talk of Peace, he called on the Allied powers to impose on defeated Germany a draconian peace that would include the shutting down of all factories, the closing of all universities, and the deportation to the island of Madagascar of all National Socialist Party officials. This essay is taken from "The Jew as Soldier, Strategist and Military Adviser," a contribution by Ziff in The Hebrew Impact on Western Civilization, edited by Dagobert D. Runes, and published in New York in 1951 and 1965.

It was the Jews principally who resisted the Nazis in occupied Europe. Even though Jews were relentlessly hunted down, and automatically herded into small concentration areas, they were an important factor in the guerrilla resistance everywhere. Their percentage in these forces throughout the Continent was phenomenal, and their courage and ingenuity outstanding. Whole Jewish guerrilla units became famous for their exploits. Their desperate courage in battle was such that the Germans were said to have feared them particularly.

Judge Leon Meis reported that at least 40 percent of the French Maquis [anti-German "resistance" fighters] were Jewish, including whole independent Jewish units. The number of Jews among the Maquis fighters is indicated in the reproach made by collaborationist Radio Paris to the French Committee of Liberation in Brazzaville, for acclaiming ten saboteurs in Paris as "liberators and true Frenchmen." Expostulated Radio Paris: "Is Grieswachs, the perpetrator of two outrages, a Frenchman? No, he is a Jew, a Polish Jew. Is Elek, who was responsible for eight derailments and the deaths of dozens of people, a Frenchman? No, he is a Polish Jew. The other terrorists are also Jews: Lifshitz, Fingerweiss, Stockwerk, and Reiman."

A French Jew, Roger Carcassone, became the leader of the resistance movement in French North Africa, which played a decisive part in causing Algiers to fall into American hands [November 1942]. José Aboulker, Pierre Smadja, and Raoul and Edgar Bensoussan, also Jews, organized the underground itself, while still another Jew, Bernard Karsenty, became the liaison officer between the underground and the Allied Military Intelligence. The record here is superb. 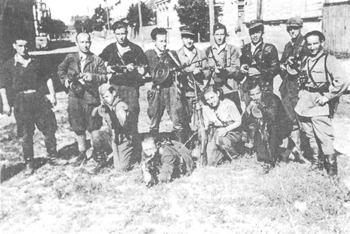 A group of Jewish partisan fighters from the ghetto of Vuna (Vilnius) in Lithuania, who took part in battles against German forces in the Vl1na district.

When the appointed hour arrived, the underground methodically seized and arrested enemy officers and leaders, occupied police and staff buildings and cut telephone wires. Raphael Aboulker commandeered the main radio station and broadcast the news of General Giraud's return. Jose Aboulker seized the Central Police Office. Alfred Pilafort, another Jew, blockaded and held the main street; and when the regular [French] army rose in opposition under the influence of Vichy dictates, still another Jew, Lieutenant Jean Dreyfus, led the partisans into battle to protect the work of the underground. He and his men fought successfully until dawn, when the American troops landed. In this action Dreyfus was killed.

Four thousand Jews succeeded in escaping the systematic extermination in Greece and took to the hills, fighting as guerrillas.

In Yugoslavia, Jewish partisans liberated whole concentration camps. There were 68,000 Jews in Yugoslavia in World War II, of whom 6,000 fought in Tito's [Communist] forces. Other thousands fought with Mikhailovich. One Jewish officer was Mikhailovich's aide-de-camp, and another directed operations of 50,000 men. General Velebit, head of the Yugoslav military mission in London, said in January 1945: "The leaders of the National Liberation Army feel deep gratitude for the magnificent contribution of the Jews in their ranks." One of the leading figures of the Yugoslav resistance, and later one of the three vice presidents of the provisional government, was Moische Pijade. Another was Dr. Alkalay.

An extremely high percentage among the Czech guerrillas were Jews. A much feared, purely Jewish guerrilla group, known as the "Jewish Patriot Brigade," operated from a mountain stronghold.

Reports coming out of Hungary through underground channels at the end of November 1944 indicated that the armed resistance against the Nazi government in Budapest was largely carried out by Jews.

In Poland, the guerrilla fighters had a high percentage of Jews who had escaped the ghetto, men who distinguished themselves by their resourcefulness and reckless courage in action. Jewish partisans out of all proportion to the existing numbers, served in every one of the raids on German outposts, estates and communications.

Cases of extreme individual heroism and daring were numerous. Baruch Goldstein who brought the first flame thrower into the ghetto, was responsible for the wrecking of four German ammunition dumps. Engineer Isaac Ratner ingeniously contrived delayed-action chemical gadgets by which many German gasoline reservoirs were wrecked. A Jewish partisan group which called itself "The Avengers," became a minor scourge, wrecking trains, destroying bridges, factories and German ammunition dumps. When the Red Army began its attack on Vilna [Lithuania], the first to enter the city were the Jewish partisans, who engaged the barricaded Germans in a bloody encounter in which neither side expected, or received, mercy.