Keeping Memory Alive for the Holocaust-Obsessed

Haaretz reports that a new survey to mark International Holocaust Memorial Day found that only 6 percent of Israeli children cite history lessons as a significant source of learning about the Holocaust (http://tinyurl.com/9xgerqp).

The annual survey, conducted by the Massuah Institute for Holocaust Studies, shows school education has a very limited influence on shaping young Israelis' understanding of the Holocaust.

Only 0.5 percent said the Holocaust memorial ceremonies, which take place for Israeli children throughout their school years, were significant in their Holocaust education.

*** We learn via The New York Times (http://tinyurl.com/8rcrjhn) that one procedure to develop memory, one encouraged by many in the Holocaust-Obsessed community, is to welcome teenagers and others to reproduce the tattoos of old folk onto their own arms, or perhaps any other part of their body. That way their skin will say “Never Forget.”

You will not be able to read the texts of the tattoos above, but the photo gives a sense of the sensibilities associated with the act of reproducing such tattoos in the service of memory.

“When Eli Sagir showed her grandfather, Yosef Diamant, the new tattoo on her left forearm, he bent his head to kiss it. Mr. Diamant had the same tattoo, the number 157622, permanently inked on his own arm by the Nazis at Auschwitz. Nearly 70 years later, Ms. Sagir got hers at a hip tattoo parlor in down-town Jerusalem after a high school trip to Poland. The next week, her mother and brother also had the six digits inscribed onto their forearms. This month, her uncle followed suit.

“‘All my generation knows nothing about the Holocaust,’ said Ms. Sagir, 21, who has had the tattoo for four years. ‘You talk with people and they think it’s like the Exodus from Egypt, ancient history.’ …

“‘We are moving from lived memory to historical memory,’ noted Michael Berenbaum, a professor at the American Jewish University in Los Angeles who is among the foremost scholars of the memorialization of the Holocaust. ‘We’re at that transition, and this is sort of a brazen, in-your-face way of bridging it.’”

*** The newly released Holocaust film, Numbered, follows Hanna Rabinovitz, a middle-aged woman who puts her father’s number on her ankle after his death. The film also tells the story of Ayal Gelles, a 28-year-old computer programmer, and his grandfather, Avraham Nachshon, both of whom bear the number A-15510 on their arms.

Mr. Gelles says that while he was in Argentina he had had an epiphany “seeing cows branded.” It led him to get the number A-15510 tattooed on his own arm and to adopt a vegan diet. He did not tell his grandfather of his plan, or perhaps of his new diet either. That part’s not clear. He just did it. Now the young Mr. Gelles has two unique memories. The tattoo on his grandfather’s arm, and that strictly vegetarian cow in Argentina. These are the kinds of memories especially welcomed by our professor Berenbaum, committed as they are to obsessing about the Jewish Holocaust.

A headline in the Jerusalem Post reads: “Holocaust film ‘Numbered’ reminds us how much people count” (http://tinyurl.com/ 94-vqhzc). Benjamin W. Corn, reviewing Numbered there, writes that the movie is a collage of narratives and photographs of Auschwitz survivors who were tattooed during their incarceration.

At the same time he notes that Jewish tradition places a taboo on using numbers to count people, which could be a problem.

“When a census was taken (Exodus, Chapter 30; Numbers, Chapters 1 and 26), the quantification was determined indirectly by using half-shekel coins as surrogates for people.

“In the Book of Samuel, King David is punished for ordering an unauthorized census. And these days, when counting to see if a ‘minyan’ is present, various 10-word scriptural phrases are used to infer whether a prayer-quorum has coalesced.

“Alternatively, some jokingly point at the minyan participants and enunciate ‘not one, not two, not three…’ as a way of pretending not to count.

“The rationale for the prohibition against enumerating groups of Jews is often thought to be a mystical gesture to ward off some superstitious force that might construe our counting as a form of bragging and therefore retaliate by reducing our critical mass.

“But Rashi, the medieval French rabbi considered by most as father of all Torah commentators, sug-gests (Exodus, Chapter 30, Verse 12) that to count human beings would be tantamount to detracting from their dignity because no one can be encapsulated into a simple objective icon such as a number. A policy that forbids counting then reflects a worldview that emphasizes the need to relate to people as multidimensional human beings.”

Professor Corn is a doctor and Chairman of the Institute of Radiotherapy at Tel Aviv Medical Center and Co-Founder of Life’s Door-Tishkofet. An accomplished man. Yet he appears to overlook the obvious. If you are Holocaust-Obsessed, you can easily enumerate groups of Jews up to the number Six Million.

Where would the venerable Rabbi Rashi come down on this troublesome issue? 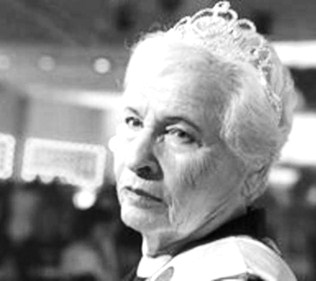 ***  Hava Hershkovitz won the “Miss Holocaust Survivor” Pageant in Israel. The affair included a lavish dinner and music at a Haifa reception hall. Some 600 people attended, including two Cabinet ministers, Moshe Kahlon and Yossi Peled, himself a Holocaust survivor.

A runner-up, the 74-year-old Esther Libber, is quoted as saying: “I have the privilege to show the world that Hitler wanted to exterminate us and we are alive. We are also enjoying life. Thank God it's that way.”

Rather than the other way.

“The women, ranging in age from 74 to 97, clearly enjoyed themselves. Wearing black dresses, ear-rings and necklaces, and sporting blue-and-white numbered sashes, they grinned and waved as they were introduced to the adoring audience. Music played as the contestants walked along a red carpet, described their memories of the Second World War.

“A four-judge panel consisting of three former beauty queens and a geriatric psychiatrist who special-izes in treating Holocaust survivors chose the winner. Hava Hersh- kovitz, a soon-to-be 79-year-old, was banished from her home in Romania in 1941 and sent to a detention camp in the Soviet Union for three years. Today, she lives in an assisted living home run by Helping Hand.”

This contest was among the many unconventional beauty pageants that have sprouted up over the years. The war-torn countries of Angola and Cambodia have held "Miss Landmine" contests for survivors of land mine explosions, Star Trek fans enjoy the "Miss Klingon Empire" contest in Atlanta, and plus-sized women in Thailand compete for the honor of "Miss Jumbo Queen."

In fact, I think the photo of Hava Hershkovitz reveals an image of a woman who, in all likelihood, was once rather beautiful.

*** Here is Giuseppe Furioso with a few thought on keeping Memory alive for the Holocaust-Obsessed:

Let's see what else the purveyors of history's greatest tragedy can do to keep the memory of this monstrous lie alive....there is already a Holocaust cookbook, In Memory’s Kitchen. Here are just a few of my ideas:

A Holocaust board game.

A Holocaust fashion show with high-end clothing that resembles the garb worn by inmates.

“Dancing with the Holocaust Survivors” which would take place in a mock gas chamber. The judges of course would be dressed as SS.

“Family Feud”, which would pit Holocaust survivors against Blacks for both sympathy and cash awards.

A fake Holocaust memoir award for the most brazen and unbelievable story of Holocaust survival.

An auction of concentration camp artifacts.