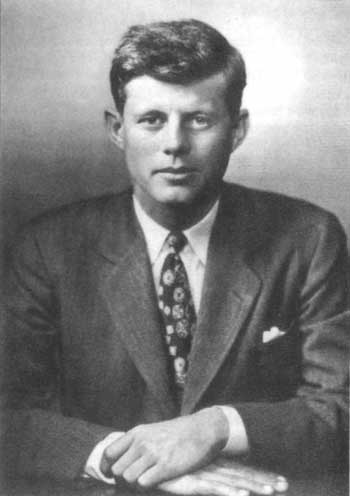 In late July and early August 1945, just weeks after the end of the war in Europe, the 28-year-old John F. Kennedy visited war-devastated Germany. Accompanying him on this tour was US Navy Secretary James Forrestal (whom President Truman later appointed as the first Secretary of Defense).

Kennedy recorded his experiences and observations in a diary that was not made public until just a few years ago. (It was published under the title Prelude to Leadership: The European Diary of John F. Kennedy, Summer 1945 [Washington, DC: Regnery, 1995].)

These diary entries show the youthful Kennedy’s wide-ranging curiosity and eye for telling detail – attributes that were also manifest in his two best-selling books, While England Slept (1940) and Profiles in Courage. Earlier in 1945, he had attended the opening session of the United Nations organization in San Francisco, and had visited Britain to view the parliamentary election campaign, covering both events as a journalist for the Hearst newspaper chain.

In Berlin, Kennedy noted upon his arrival there on July 28, “The devastation is complete. Unter den Linden [boulevard] and the streets are relatively clear, but there is not a single building which is not gutted. On some of the streets the stench – sweet and sickish from dead bodies – is overwhelming.” For the Berlin population, he reported, “The basic ration is 1½ pounds a day – approximately 1,200 calories (2,000 considered by the health authorities for normal diet – the ration is only 900 calories in Vienna).”

Kennedy made several diary references to the ferocity of the Soviet Russian occupation of Germany. “The Russians moved in with such violence at the beginning – stripping factories and raping women – that they alienated the German members of the Communistic Party, which had some strength in the factories.”

“Raping and looting” by Soviet troops “was general,” Kennedy also reported. “What they didn’t take, they destroyed.” Elsewhere he wrote: “The Russians have pretty well plundered the country, have been living off it … The Russians have been taking all the able-bodied men and women and shipping them away.”

He also took note of the impact of the devastating British-American air attacks: “According to our naval experts, the bombing of Germany was not effective in stopping their production, and production increased three-fold during 1942–1944.” Right until the end, Kennedy also reported, an adequate food distribution was maintained in the German capital: “The feeding in Berlin was extremely well organized, even in the most severe blitz.”

Ordinary Germans, he reported at another point, “did not realize what was going on in the concentration camps.”

Kennedy and Forrestal also visited Bremen, an important north German industrial and commercial center, and a major port city. As Kennedy reported, the Russians were not the only occupation forces to carry out wide-scale looting in Germany: “The British had gone into Bremen ahead of us – and everyone was unanimous in their description of British looting and destruction, which had been very heavy. They had taken everything which at all related to the sea – ships, small boats, lubricants, machinery, etc.”

He also noted misdeeds of US troops. “Americans looted town [Bremen] heavily on arrival,” he wrote. “People do not seem to realize,” he added, “how fortunate they have been in escaping the Russians. As far as looting the homes and the towns, however, the British and Americans have been very guilty.”

In Bremen, Kennedy wrote, the Germans' diet “is about 1,200 calories – ours being 4,000.” In spite of everything, “none of the [American] officers and men here seem to have any particular hate for the Germans.”

Kennedy met and spoke with US Navy officials in Bremen. Because he had been commander of an American torpedo boat in the Pacific – the famous PT-109 – he had a special interest in the German counterpart – the Schnellboot or “E boat.” After looking into the matter in some detail, Kennedy concluded that the German version was “far superior to our PT boat.”

After Bremen and Bremerhaven, Kennedy and Forrestal flew to Bavaria, where they visited the town of Berchtesgaden and then drove up to Hitler’s mountain retreat, which was “completely gutted, the result of an air attack from 12,000 pound bombs by the R.A.F. [British air force] in an attempt on Hitler’s life.” They then ascended to Hitler’s “Eagle’s Nest” lair high in the mountains.

Just after this visit, Kennedy wrote a remarkable commentary in his diary, dated August 1, 1945, about Hitler and his place in history:

After visiting these places, you can easily understand how that within a few years Hitler will emerge from the hatred that surrounds him now as one of the most significant figures who ever lived.

He had boundless ambition for his country which rendered him a menace to the peace of the world, but he had a mystery about him in the way that he lived and in the manner of his death that will live and grow after him. He had in him the stuff of which legends are made.

Less than a year after this European tour, Kennedy was elected to Congress in Massachusetts, beginning a political career that took him to the White House, and which ended suddenly with his death on November 22, 1963.

"The great enemy of the truth is very often not the lie – deliberate, contrived and dishonest – but the myth – persistent, persuasive, and unrealistic... Mythology distracts us everywhere – in government as in business, in politics as in economics, in foreign as in domestic affairs... "
—John F. Kennedy, Speech at Yale University, June 11, 1962.