Herewith I announce that I have set myself the worthy goal of shedding light on who we really are and what we really say. I’ll try to do this weekly.

Who’s “we,” you ask? We, whom our numerous detractors like to call all kinds of nasty names—among them, “Holocaust Deniers.”

It’s got to stop—and it won’t stop by our salutary efforts of heaping facts on top of facts and reason upon reason. For thirty-plus years, that’s what Revisionists have done.

We counted on people with brains, on people who understand fairness, people who would not close their eyes to overwhelming evidence that “Germans” didn’t do what “Jews” proclaim they did.

We need to rethink our strategies. Facts are too dry—too unappealing and too boring. Facts by themselves will never win the battle. Spielberg understood that perfectly with his defamatory feature, Schindler’s List. Logic takes brains, and brains take a hike when strong emotions are triggered. Name-calling costs nothing and works like a charm.

“It’s just a novel,” we pleaded. “Look at forensic evidence. Science does not lie, not even for a ‘Nazi.’”

Fat chance that argument would make the tiniest difference.

Put Schindler’s List and The Leuchter Report side by side, and not another word need to be said. You know the “truth.” You saw it

in the movies and read it in the papers. Period.

I had a telling experience once when I was more politically naïve than I am now. The year was 1995. I had just launched a website and had christened it the Zundelsite—and did I ever cause a global cyber-storm! This was a time, remember, when html coding was still done by hand. I had the feeling I was flying a jumbo-jet solo—with no idea about what kept it in the air.

Down came a huge, huge censorship attack. I felt like a mosquito being shot at with a cannon—what had I done that was so scandalous?

I soon found out. I had just met an interesting Swabian with the world’s thickest accent and thought that he needed some help, publicity-wise—a task at which I excelled.

Smack on the Zundelsite, I posted a fat trial transcript titled “Did Six Million Really Die?” and half a dozen essays from the Institute for Historical Review. Long story. I lived in San Diego at the time.

I got a friendly call from a producer of a television series called “The Learning Channel,” broadcasting out of San Francisco. Did I mind doing a program on my … ah… controversial views?

I didn’t know I had any.

He insisted gently I did. He would pay my airline. He would send a cab. He would make sure I had protective escort. No need for me to be nervous. Me, nervous? Whatever for?

I was a novelist of some ac-claim, doing media all the time. By then, I was a pro at doing interviews. I didn’t come unglued in front of a camera. I thought he was a bit too squirming and solicitous, but did not give the matter further thought.

I would be glad to do a show with him, I told him.

I wasn’t really all that knowledgeable about what he referred to as “the hoary issues between the Germans and the Jews,” but what was there to fear? This was America.

It’s hard to believe, but in the mid-‘90s I was a grass-green novice.

So far, so good. I flew to San Francisco. I was picked up by a young Jew, as friendly and engaging as they come. 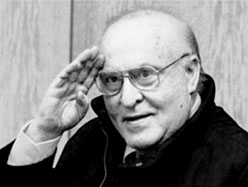 It was an impressive studio, with all kinds of people smiling and smiling at me. Wall-to-wall smiles. Ear-to-ear smiles. The anchor, a young, very blond female, a Jane Pauley type – with a smile as radiant as the sun – simply outdid herself by making me feel welcome. She could not have been nicer – as smooth, polite, and polished as can be.

An assistant pinned the mike on me. My stunningly beautiful anchor leaned forward, pulled her face into the ugliest visage of hatred I have ever had the displeasure to see, and literally hissed at me:

I leaned forward, too. I said as calmly and as sweetly as I could: “Are you a Kike?”

I might as well have punched her in the nose. She reeled back. She was speechless.

I caught my breath and added:

After that, as I remember this episode, we just stared at each other for a minute or so. There was the Great Divide. I stood right at the precipice. I know I didn’t flinch. To my knowledge, that interview was never broadcast.

I have sometimes told this story to others, and I can always sense that, while people might agree with me and even sympathize, they think that wasn’t very ladylike of me.

That in itself is telling. It’s perfectly okay to insult a German morning, noon, and night, right? It’s not okay to answer tit for tat?

I want to spend this coming year to do my part in diminishing the virulent, utterly unjustified hatred against Germans in general and my own love specifically.

Ernst is a kind and thoughtful activist who is not what his detractors shriek from the roof tops. Ernst Zundel doesn’t hate. Ernst Zundel is an activist of rock-hard principles, however. What’s fair is fair, he says.

Ingrid follows this with two additional anecdotes. One details Ernst’s relationship with a Palestinian woman, the other with a Black man associated with NAACP. Find the entire article in Veterans Today (http://tinyurl.com/ct3k3rl)

I do not speak Hebrew, but I understand it has no word for “history.” The closest word for it is “memory.”

Chief Rabbi Jonathan Sacks has written that history is an event that happened some time else to someone else—“his story.” And that memory is “my story”—something that is part of who I am.

History is information then. Memory is part of your identity.