Ask anyone in the UK who has heard of the Leuchter Report and you can be fairly sure they will tell you the same thing: it has been ‘discredited.’ But –“behold, O Dionysus,” as Nietzsche would have said, “I sing a new song”: there are two different references we need to fully unpack the meaning of what Fred Leuchter accomplished, with such amazing rapidity, twenty years ago.

I don’t accept the charge that the Leuchter’s report is ‘flawed’ as David Irving remarked at his trial. It’s not flawed, it just has a couple of weaknesses. And please bear in mind that I am solely here concerned with his chemical measurements, not with his professional estimation as to how the chambers in question could never have functioned as human gas-chambers. The practical weakness of his sampling lay in the presence of guards around the snowy walls of the Majdanek disinfection chamber (DC) in February 1988 which prevented Fred from being able to take any samples there. That meant that he had only one DC sample; it was quite a big one however, chiseled out from the Birkenau DC. His Report has been scoffed at by various persons, e.g. Pressac on the grounds that his staggering claim – surely the centre-piece of his Report – of a 2000 fold difference in residual cyanide levels, was based only on this one sample.

Fred’s chemical argument was dualistic, contrasting the parts per thousand cyanide level of this single DC sample, with the parts per mil-lion level of all his other levels. This one sample he unfortunately alluded to as his ‘control.’ That’s as it were, the theoretical weakness of his Report, at least in its chemical aspect. It was Fred’s Report that really put these DCs on the map, and drew everyone’s attention to them: their functioning had been completely covered-up at Nuremberg. They were where mattresses were de-loused, where the gas really was used.

One sheds a tear at the way the main and more or less only British debate over the Leuchter Report – viz, the discussion at the Irving libel trial – took place without allusion to Germar Rudolf’s replication of the Leuchter results in 1991. The tremendous power of the chemical argument here involved, comes from the concordance between these two surveys. They used the same method of analysing for iron cyanide, and the German lab (Rudolf’s samples) was slightly more accurate than Leuchter’s US lab. Both of these scientific investigations involved total career-termination of the men involved, i.e. Leuchter and Rudolf both sacrificed their livelihoods for the sake of scientific truth. Rudolf in 1991 took a large number of samples from the DC walls, but only three from the alleged human gas chambers at Auschwitz. The latter fact is the weakness of his survey, as it were, if considered in isolation. 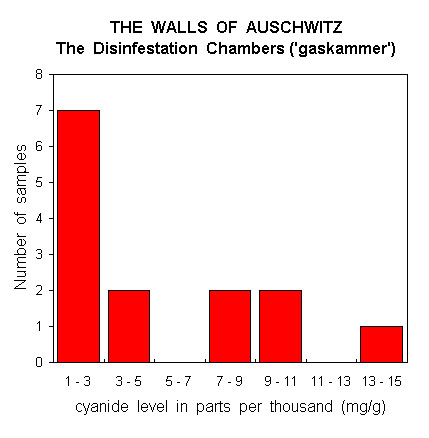 We combine the two data-sets together, after omitting all the samples where the cyanide levels were too low to measure, and that gives us a total of forty cyanide measurements (1). The two tables show this data. We can clearly see the two-thousand fold difference between the DC samples and the AHGC (alleged human gas-chamber) samples. This is the central axis around which future discussion of ‘the Holocaust’ will have to revolve. The life-blood of science is replication, whereby one result confirms another, and we’re seeing it here. Then equally clearly we see that there is no significant difference between the AHGC samples and those of ‘controls’ i.e. samples taken from living quarters, wash-rooms etc. This fact terminates the mass gassing story, at any rate for the five or so normally so-designated chambers at Auschwitz. There is no ‘natural’ background level of cyanide in brick, so if around one part per million of cyanide appears in brickwork of these control samples as well as in the AHGCs, then this suggests that the rooms were fumigated once or twice with the cyanide to delouse them.

I developed a thread of several pages on the CODOH website, in the course of which I approached Mr. Dan Desjardins on the some-what arcane question of which Leuchter samples were ‘genuine,’ i.e. taken from old WW2 brickwork of chambers where human gassing allegedly happened: those samples not taken from such are what we are here calling ‘controls’ – that’s quite an important concept if we are here testing a scientific hypothesis. Fortunately, these enquiries stimulated Mr. Desjardins to compose an article on the subject (2), and his data there presented has been used for constructing these charts. 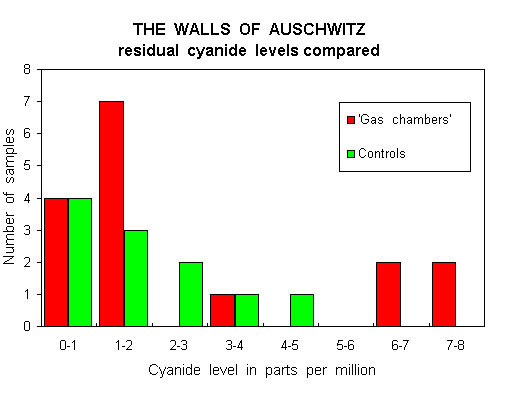 Leuchter’s chemical data needed Rudolf’s replication – of a similar number of samples from much the same chambers and the same chemical method – to confirm its validity; and it also needed Mr Desjardin’s careful retracing of exactly where Leuchter and his team had ventured, twenty years ago, to distinguish between the AHGC and ‘control’ samples.

Leuchter’s work gets dismissed on the grounds made by Alpha-lab chemist Dr James Roth, interviewed in the 1999 film about Leuchter ‘Mr Death:’ that the cyanide gas would only have penetrated a mere ten microns into a wall. Rudolf’s quite thorough investigation of cyanide penetration into the wall is here of value, showing how brick and mortar are permeable to cyanide gas (was Roth maybe confusing brick with stone?)

Worldwide publicity was being given to Leuchter’s trailblazing Report, and clearly something had to be done. So Dr Piper, the manager of the Auschwitz museum, approached a chemical team in Poland, and gave them permission to take and samples from the old walls. My CODOH essay "The Walls of Auschwitz – a Chemical Study" reviews the Kafkaesque endeavour that followed. Dr Marciewicz et. al. averred they were using a US method published in 1947 which was somehow one thousand times more accurate than the method used by Alpha Laboratories in the US – and they cited cyanide levels of parts per billion in dormitories, etc! I checked out this original reference (and might be the only person in the great debate who did so) by going to the Royal Society of Chemistry in Piccadilly.

The librarian there reached down the first volume of the US Industrial and engineering Chemistry (3) and blew the dust off it. Clear as day, the method went down to no more than 0.2 mg/l (in solution, and would be equivalent to around 2 mg/l. i.e. 2 ppm in the brickwork from which it is extracted). Milligrams and micrograms were being muddled up by the Poles in a big way! The Poles used a devious argument whereby they were only measuring the soluble component of cyanide in the brickwork, which could be merely a fraction of 1% of the total, hence the need for these very low concentrations. Orthodox, pro-Holocaust studies always cite this Marciewitz et. al. study as if it had ‘refuted’ Leuchter. It’s a shame there are no Holocaust Studies in universities where students are al-lowed to review these investigations, because students would see through this ploy pretty quick.

In my "Leuchter 20 years on" article (issue 153 Smith's Report), I showed graphs of the data of Rudolf and Leuchter combined, for three distinct groups: wall cyanide samples from the delousing chambers (DCs), from the alleged human gas chambers (AHGCs) and from 'controls' i.e. barracks kitchen etc. I neglected to give the mean values of the data thus graphed, and here they are.

Mean wall concentrations of total cyanide at Auschwitz, from combining the Leuchter and Rudolf data-sets, parts per million (µg/g):

A t-test comparing (2) and (3) gives t = 1.1 which is wholly insignificant: that is the conclusive refutation of "the Holocaust" – for the first time, I suggest. Revisionists have pointed out that the two thousand fold differential between (1) and (2) shows pretty clearly that one was used for regular, mass cyanide gassing whereas the other was not. But, the fact is that pro-H. experts have not accepted this argument. Unlikely though it may seem, they have argued that this data merely shows that "bugs are harder to kill" than humans, i.e. the DCs needed more cyanide. My article argued that only the establishing of a 'control' group gives a truly conclusive argument: viz, that the two groups of AHGC and control come from the same pool, they are not significantly different.

My article described the two thousand fold differential as "the central axis around which future discussion of 'the Holocaust' will have to revolve." May these figures assist that revolution. I'd be happy if anyone wants to check through them, they are all in the Rudolf Report and Mr. Desjardin's CODOH article (slight differences are possible, where more than one analysis was done per sample).

These values are compatible with the data published by John Ball in 1993: from a DC, 3000 ppm (n=2) and from AHGC sites 0.5 + 0.6 (n=4) ppm and including these would lower the mean AHGC value, bringing it closer to the 'control' mean. Seven tons of cyanide was used at Auschwitz 1942-5, and its destination remains of interest. The Ferro cyanide fixed into the old brickwork gives a more reliable memory of where it was used than does anything else! Mother Nature gave us that unexpected ace card, by the brickwork being so porous to the hydrogen cyanide, and by the iron complex thus formed being so permanent.

[1]
Leuchter took one DC sample, plus he took 14 others with measurable levels of cyanide. Mr. Desjardins (ref 2) puts 5 of these as ‘controls’ and 9 as AHGC samples. For the Rudolf data, likewise divided for inclusion in these charts, see tables 1 and 2 of the author’s Walls of Auschwitz (CODOH). For the two data-sets, see Germar Rudolf, The Rudolf Report, expert Report on Chemical and Technical Aspect of the Gas chambers of Auschwitz , 2003 p.249 (Leuchter data) and p.254 (his data).
[2]
D. Desjardins, The Leuchter Report Revisited, 2007 (CODOH); see also his Kenneth Stern's Critique of The Leuchter Report, 1997.
[3]
Joseph Epstein, ‘Estimation of Micro-quantities of Cyanide’, Industrial and engineering Chemistry 1947, 19, 272-274.