Life of a Much-Maligned Conductor Examined in New Biography

Andrew Gray, a writer and translator, is a former office director in the US Department of Commerce. He lives in Georgetown, Washington, DC.

Conductors in our time fall readily into two categories: Wilhelm Furtwängler and all the others. Among those who recognized this truth early on was Adolf Hitler, possessor of perhaps the best musical ear of any contemporary statesman – except for Ignaz Paderewski. Despite many importunities and provocations in later years, Hitler never wavered in this judgment. A photograph of the Führer reaching upward to the podium to shake the conductor’s hand after a 1935 concert of the Berlin Philharmonic is remarkable testimony – such expressions of respect by Hitler were rare. 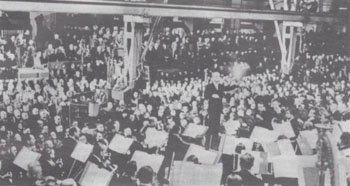 Furtwängler conducts the Berlin Philharmonic in a performance of a Beethoven concerto during the lunch hour in a German armaments factory, 1944.

This admiration – and Furtwängler’s decision to remain in Germany to continue to lead the Berliner Philharmoniker as the nation’s premier orchestra – has fostered a decades-long campaign of denigration of the conductor by a legion of self-indulgent scribblers, musicological and otherwise. In their view, Hitler’s approval condemns him to a kind of eternal damnation. It’s a wonder that shepherd dogs, vegetable soup and mineral water have been spared their opprobrium.

This work’s title is misleading: it is not simply another exercise in diabolization. Indeed, Mr. Shirakawa intends this as an apologia, and is at pains to show that Furtwängler’s denigrators are guilty of distortion and exaggeration. What Shirakawa seems incapable of grasping, though, is that Furtwängler had nothing whatever to apologize for.

At the heart of this book is a lengthy list, alphabetically arrayed, of some of the many politically and ancestrally persecutable individuals who were spared harassment by the National Socialist government as a consequence of Furtwängler’s personal intervention. This includes a number of “full” Jews who spent the entire war within Germany, entirely unmolested. Indeed, thanks to the author’s commendable digging, this volume is a lode of such nuggets.

Do the performing arts flourish best in times of dire stress and emergency? There is much evidence for this. One thinks, for example, of theatrical undertakings by German prisoners in Allied P.O.W. camps of Faust, reputedly among the most intense and forceful ever given. Or of the German entertainment troupes that performed right behind the front lines in Russia, even in the latter stages of the war when many were overrun and vanished virtually without trace. Or of the 1943–44 summer performances of Die Meistersinger at Bayreuth, with audiences comprised almost entirely of wounded soldiers. (One such performance, conducted by Furtwängler himself, has happily been preserved on tape.) Or best of all, the concerts under his baton of the Berlin Philharmonic from the years 1942–4 (tapes of which were stolen by the Soviets in 1945 and then returned, in the burgeoning spirit of Glasnost, in 1987). 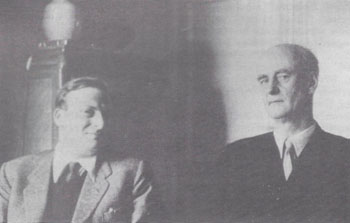 In this sense, these wartime concerts constitute an apogee of the performing arts; the evidence for the ear, even without consideration of the extraordinary circumstances in which the musicians and the audiences found themselves, is unmistakable. That the next century is likely to appreciate the centrality of Furtwängler to our civilization, or what is left of it, most likely accounts for the recent renewal of attacks upon his memory – some of which have appeared in the form of reviews of this book. Mr. Shirakawa, it has been contended, is much too indulgent. Yes, he is – but not in the sense those propagandists assume. One of the privileges of being a revisionist is to decode such texts as this, to see through and beyond it, and to sense the hollow ring many of its judgments will have to future ears. Shirakawa means well, but he remains entangled in the metaphor of diabolism.

There are a few heroes in this story – Yehudi Menuhin chief among them. Furtwängler was never anti-Semitic, a fact his detractors obviously find embarrassing. The revolting behavior during the postwar period of such former colleagues as Bruno Walter makes excruciating reading, as do the lucubrations of that moralistic gasbag, Thomas Mann, to say nothing of his lunatic daughter Erika. (At times one has the feeling the whole Mann family was a bit bekloppt).

Furtwängler was not long on humor, but worth preserving is his tart comment about the postwar critics who condemned him for remaining in Germany after 1933: “They seem to feel all seventy million Germans should have decamped and left Hitler behind alone.”

Mr. Shirakawa takes welcome and indignant aim at Delbert Clark’s intentionally distorted reporting in the New York Times of the preposterous 1946 “de-nazification” proceedings endured by Furtwängler (which kept him from the podium for nearly two years). All the more heartening, then, was his return, in May 1947, to the podium of the Berlin Philharmonic, to conduct his first postwar concert. The author mentions cheering of 15 minutes duration at the close. No, the ovation lasted an hour and 15 minutes, and there were 47 curtain calls.