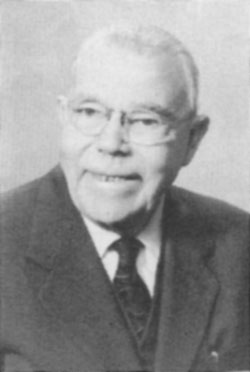 Dr. Martin A. Larson, a good friend of the Institute for Historical Review since its founding, died on January 16 in Arizona at the age of 96.

He spoke at the first IHR conference, held at Northrop University in Los Angeles in 1979, dedicating this first-ever International Revisionist Conference to the memory of his friend of many years, historian Harry Elmer Barnes. Larson concluded his dedication address with the words: "Let this convention be a memorial to this great and courageous man, and let his great spirit, which never was daunted by obstacles or threats, permeate our own work while we are here." Dr. Larson also spoke at the IHR conferences of 1980, 1981, 1982, 1983, 1986 and 1987.

He served as a member of this Journal's Editorial Advisory Committee from the very first (Spring 1980) issue until his recent death, and four articles by him appeared in the Journal over the years.

Larson was born in Whitehall, Michigan, in 1897. Following service in the US Navy, he attended and graduated from Kalamazoo College, where he distinguished himself in track, forensics and scholarship. With a state fellowship, he went on to study at the University of Michigan, which awarded him a Ph.D. in English literature in 1927 for his research into the sources of Milton's theology. For a number of years he taught at what are now Eastern Michigan University and the University of Idaho.

After a period of running his own business in Detroit, he retired at the age of 53 to devote himself to research and writing. He took a particularly keen interest in comparative religions, taxation and the monetary system.

Dr. Larson was the author of more than 20 books. His first, The Modernity of Milton, was based on his doctoral dissertation. Another, The Religion of the Occident, was first published in 1959 and appeared later in a revised edition under the title of The Story of Christian Origins. Other books included Jefferson: Magnificent Populist and The Essene Christian Faith, the latter re-published in 1989 by the Noontide Press. (Both are available from the IHR. [check www.ihr.org for current availability and price; ed.])

Dr. Larson was a guest on countless radio and television programs, and his writing appeared in numerous periodicals, including Fortune and Reader's Digest. During the final years of his life, he and his wife, Emma, made their home in Arizona. Along with his many friends and admirers in America and around the world, we are saddened by his passing. We here at the Martin Larson IHR will remember this gentleman and scholar as one of our most steadfast friends.