My 'Invasion' of the Computer Networks 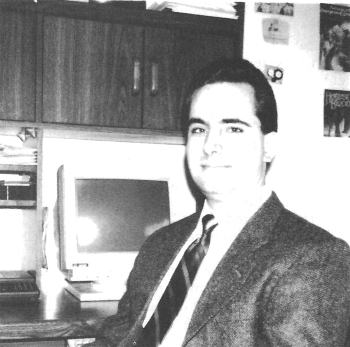 I first heard about Holocaust revisionism from my grandfather in October 1988. I read several leaflets put out by the IHR and a few articles from the IHR Journal. My first impression was one of mixed shock, disbelief and curiosity. What I read was so much at variance with what I had been taught with such repetition and zeal all of my life that I didn't know what to make of it. Then the seriousness of the whole matter dawned on me, and I began to think that some things might be seriously wrong.

Being a 17-year-old idealist, and much more naive than I am now, I first thought that surely this dispute over the facts had either already been settled, or would soon be settled in an honest discussion between recognized historical experts, and that the truth would shortly be proven and announced in the media for all to see.

Even then, however, I could see that revisionists had encountered an extreme amount of suppression, dishonesty, slander, legal persecution and even violence. So I decided to get personally involved and see what honest help I could lend in settling the matter.

Thrilling at the possibility of helping to set the historical record straight in a major way, I took the issue to the computer networks, which I had discovered about a year earlier. I chose the WWIV international computer network, to which I already had access. With mixed feelings of curiosity, doubt and defiance, I publicly invited discussion on the subject.

In my first message I mentioned that I recently had come across some well-referenced information that, among other things, indicated that six million Jews were not murdered by the Nazis during World War II, the Nazis did not gas anybody in homicidal gas chambers, and the Anne Frank "Diary" might be a forgery. I also asserted that the Holocaust story was being exploited as an enormous financial and political scam, and the mass media appears to be controlled by a powerful, cohesive group of unscrupulous individuals who abuse their power to an alarming degree. I expected rational discussion and debate, but received something very different.

What I got was a great quantity of vicious name-calling, false accusations of ill will and dishonesty, numerous death threats and all forms of untruth and fallacy. Some people made shrill, vague statements about "the pictures" and "the eyewitness testimonies," and how they simply could not believe that I could be so evil.

After about seven months of posting revisionist arguments on the WWIV network, the Holocaust lobby succeeded in exerting enough pressure to deprive me of access to that network, despite the fact that those who run it claimed to support freedom of speech.

In August 1991, with my grandfather's help, I started my own bulletin board system (BBS), "Banished CPU." This BBS is not about "hate." It is about truth and intellectual freedom, and it supports freedom of speech.

More than 8,000 files are available for downloading on "Banished CPU." Although it provides information on a wide range of subjects, it is clearly the Holocaust revisionist material that is considered the most objectionable and "dangerous." Because of pressure, "service provider" firms broke their agreements and dropped my BBS. No longer tied into any network, I operated "Banished CPU" as a local BBS for many months. In the summer of 1995, I set up to became my own Internet provider, with a high speed link to MCI's Internet backbone.

Thanks to my grandfather, I no longer have to transcribe revisionist articles by hand. I now have a nice flat-bed scanner and high-quality software that enable me to scan articles electronically instead of typing them manually. They still require a little editing (mostly just formatting), but the scanner makes entering articles into the computer much faster and easier. It also allows me to scan pictures (color or black and white) with a high degree of detail.

Generally I've been happy with the response to "Banished CPU." Typically I receive several hundred inquiries each month. Since starting my BBS, it has received more than 157,000 calls.

Much of the media coverage of my activities vilifies and grossly misrepresents me and what I say. A good example was a CBS television news report broadcast December 26, 1988, which described my work as an "invasion" of the computer networks. It portrayed me as a purveyor of racial hatred – even though I've made no statements whatsoever in support of racism, but have in fact denounced racism (and all other forms of prejudice) on several occasions.

On November 13, 1992, a local KATU television news report portrayed me as "dangerous" and "scary," and falsely suggested that I use my BBS to sell information on how to commit crimes. For melodramatic effect and to frighten the public, it included film clips from the movie "Rambo," which showed "Rambo" blowing up a jeep and several buildings in huge fiery explosions.

An article in The New York Times, April 30, 1993, also mentioned my BBS activism in an extremely inaccurate and negative way. More recently, MTV cable television broadcast a special report on "hate groups" that dishonestly included footage from my BBS.

Such media reports seek to stigmatize and ostracize me and anyone else who provides access to suppressed information. They fail to mention that "Banished CPU" supports freedom of speech and that it provides information on a wide range of subjects. These reports also carefully avoid discussing specific revisionist arguments.

I have given up responding to the constant personal attacks and irrelevant bickerings of the opposition. I usually just ignore such attempts to divert attention from the real issues. If I were to answer all of the outlandish accusations of my enemies, I would have no time to do anything else.