These are trying days for Russia. The privations and sufferings endured by her people are all the more tragic because this is a potentially wealthy and powerful nation with a long and proud history.

Contrary to the optimistic hopes and expectations of so many, the swift collapse of Communist Party rule in 1991-1992, and the accompanying breakup of the Soviet Union, failed to bring prosperity and security. Naive enthusiasm for westernstyle democracy has given way to bitter disappointment.

"Russia is teetering at the brink," says Michael Intriligator, professor of economics, political science and policy studies at the University of California Los Angeles. In a recent Los Angeles Times essay he explains:

Russia is in an impossible situation, with catastrophic economic and political problems ... The economy is in a nose-dive, with continuing huge drops in output and high levels of inflation. Russia is now in a depression comparable with the United States in the 1930s and, at the same time, suffers an inflation comparable with that of Germany in the 1920s ... The economy is also riddled with crime.

From January to September 1995, the Kremlin recently announced, real incomes in Russia dropped by twelve percent, and 40 million of the country's 148 million people are living below the poverty line, defined as $68 per month.

Unable to bring stability or even basic order to this vast federation, President Boris Yeltsin and his government enjoy only minimal popular support. His administration has succeeded in alienating nearly every significant social group, including workers, intellectuals, and honest businessmen.

In this climate of uncertainty, it is hardly surprising that demands for a nationalist, authoritarian, "law and order" regime are widespread and growing. A prominent artist, Ilya Glazunov, says:

Russia is undergoing the most terrible moment of its history. Our children are being bought for millions of rubles. The most beautiful Russian girls are being sold as prostitutes in Europe and Asia. We are becoming an American colony! ... The mad insects and dogs of the democratic press say "Russia for Russians" is a fascist slogan. But who else is to own Russia if not Russians? ... Everybody should fight for the revival of Russia!

In a country where patriotic and national sentiment is deeply rooted (much more so than in the United States) nostalgia for the centuries-old Tsarist regime that was toppled in 1917 is widespread. Grass-roots pro-Tsarist and monarchist organizations have sprung up in many cities. A virtual cult of popular veneration for Russia's last emperor has swept the nation in recent years, and portraits of Nicholas II hang in countless homes and apartments.

More and more Russians are even willing to identify themselves as fascist. Boris Mironiv, Chairman of the Russian government's Press Committee (until he was fired by Yeltsin), publicly declared: "I'm a tough nationalist. It's healthy, it's the people's roots, history and wisdom. If Russian nationalism is fascism, I'm a fascist."

If you are interested in Russian fascism, you need only go downtown to the square in front of the former Lenin Museum in the shadow of the Kremlin. Here a variety of publications are openly for sale: The Will of Adolf Hitler; Protocols of the Elders of Zion; Kikes, a book with a Star of David formed from human bones on the cover; Sources of Hatred: Essays on the Jewish Question, first published in Munich in 1942; and the latest book by militant Alexander Barkashov, leader of the fascist Russian National Unity Party ... Nazi material is distributed widely in Moscow and St. Petersburg...

Most of the street sellers, who also offer cassettes of Third Reich marching songs, are young men, some of them sporting modified swastika insignias.

In Russia today, as so often in other countries throughout history, patriotic and nationalist sentiment is closely linked to antipathy toward Jews. Russians are acutely aware of the remarkable role played by Jews in their history, most notably in the Communist takeover and in the early Soviet regime.

Seven decades of relentless Communist propaganda, draconian laws against anti-Semitism, and brutal suppression of ethnic nationalism, have failed to stamp out such sentiments. A 1995 University of Toronto survey found that anti-Jewish feeling in Russia has been growing. The survey of 12,000 Russian adults in dozens of cities and towns across the country showed that a significant percentage favors deporting all Jews. 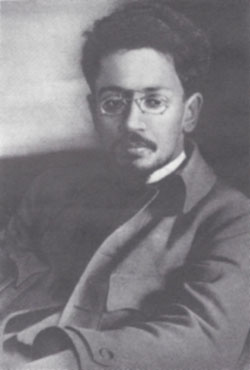 Yakov Sverdlov (Solomon) played a crucial role in the brutal Communist takeover of Russia, 1917-1920, and in the early Bolshevik regime. He was executive secretary of the Communist party and, as chairman of the Soviet government's Central Executive Committee, head of the first Soviet government. Along with Lenin, Sverdlov gave the order in July 1918 to murder the former Tsar, Nicholas II, and his entire family.

For much of the American media, the personification of Russian "fascism" is Vladimir Zhirinovsky, leader of the deceptively named Liberal Democratic Party. Born in 1946, he first burst on to the international scene during the Russian parliamentary elections in December 1993, when his previously almost unknown party captured 22.8 percent of the vote, more than any other single political group. Since then Zhirinovsky's party has lost some parliamentary seats and popular backing. Public opinion polls indicate that support for him and his party has dropped from a high of more than 30 percent to nine percent.

Zhirinovsky repeatedly attracts international notoriety for sensational antics and provocative statements. He has called "for the preservation of the white race," and has spoken of creating a greater Russia that would reincorporate Finland, Ukraine, the Baltic lands, part of Poland and even Alaska.

During a visit to the United States in late 1994, at the invitation of San Francisco's World Affairs Council, Zhirinovsky made several public appearances, including one on national television with Phil Donahue.

Zhirinovsky's comments about Jews have brought particular censure. In one interview (Time magazine, Nov. 21, 1994), he said that "the influence of the Jews is very strong" in the USA. "It's well known that finance and the press in America – and also in western Europe and Russia – are controlled by Jews." He went on: " ... The fact is that a majority of people who made the [1917 Bolshevik] revolution possible, as well as perestroika, were of Jewish origin. In fact, the first Soviet government was almost 90 percent Jewish. Those who first ran the Gulag prison camps were mostly Jewish ... "

Once, when an Israeli official addressed the Russian parliament, Zhirinovsky led the members of his party's faction out of the assembly.

Not all Russian patriots are impressed with the outspoken political leader. Many are put off by his flamboyance and seeming lack of self-control. Aleksandr Solzhenitsyn, for one, calls him "a caricature of a patriot."

Whether or not Zhirinovsky ever takes supreme power in Russia (as he has often vowed), it is unlikely that this great nation will adopt the liberal-democratic social-political system of the United States. Eventually, Russia will almost certainly "revert to type," adopting an overtly nationalist, more or less authoritarian and culturally conservative social-governmental order rooted in its ancient traditions and consistent with its particular needs.

"If a nation expects to be ignorant and free in a state of civilization, it expects what never was and never will be … If we are to guard against ignorance and remain free, it is the responsibility of every American to be informed."
—Thomas Jefferson