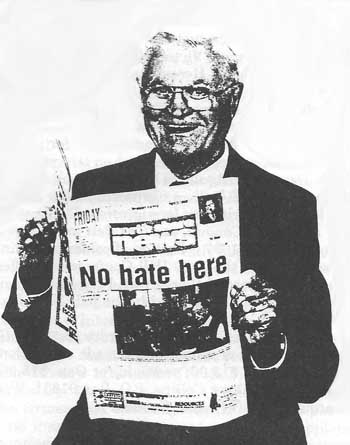 Doug Collins looks up from the North Shore News issue that reports on his November 1997 victory in a closely-watched "hate speech" case involving a column about "Schindler's List" he had written from the British Columbia paper. This photo is taken from the front cover of his new book, "Here We Go Again!"

Doug Collins – the first Canadian journalist to be hauled before a “Human Rights Tribunal” – is once again delighting fans and confounding enemies with the publication of Here We Go Again!, a collection of 100 of his North Shore News columns.

This is Collins at his best – adroitly taking aim at cant, bigotry, sophistry and double standards in prose that is unfailingly clear, witty and vigorous. This is a fun read.

Leading off with the notorious “Hollywood Propaganda” essay that brought him before a “Human Rights Tribunal,” this self-published anthology also includes “All Alone on the Rights Griddle,” “Massacred by the Media,” “Swastikas and Double Standards,” “Thought Police On Patrol,” “Pokenoses and Pressure Groups,” and “A Redneck to the Rescue.”

He stanchly defends the traditional British-heritage rights of free thought and free speech even for such bothersome Canadians as Paul Fromm, a school teacher who lost his job because of his views on immigration and multiculturalism, and J. Philippe Rushton, a professor who nearly lost his for concluding that racial differences are more than skin deep.

Collins can take special pride in his “Rambo Rough and Ready” column, apparently the first critical look published anywhere of the “memoir” of Australian Donald Watt, who recounted hair-raising experiences as a wartime prisoner at Auschwitz and other German camps. Having been a World War II prisoner of the Germans himself, Collins had special reason to be skeptical of Watt’s boasting. Although it initially received high praise in the British and Australian press, specialists later authoritatively exposed Watt’s memoir as a fraud.

Here We Go Again!, says Collins, is “an act of defiance against the censors. I think this is a valuable piece of journalistic history. The North Shore News and I are the first anywhere in North America to be hauled before a human rights tribunal over an expression of opinion. We are fighting a heresy law. The public should be able to see what it is all about. This book will do that.”

For 13 years – from 1984 until his retirement in September 1997 – Collins’ thrice-weekly column in the North Shore News of Vancouver, British Columbia, was one of paper’s most popular features. In more than 1,400 essays written in lively, straight-forward prose, the British-born Collins laid out well-informed and common-sense views on the country’s most emotion-laden issues, including immigration, the status of Quebec, and special privilege “rights.”

The column that got him into the hottest of hot water was a March 1994 essay, “Hollywood Propaganda,” that skewered Steven Spielberg’s much-hyped motion picture “Schindler’s List.” Collins referred to it as “Swindler’s List” and “hate literature in the form of films.” He also wrote that “the Jewish influence is the most powerful in Hollywood,” and dismissed the fabled “six million” Holocaust figure as “nonsense.” (Several of Collins’ provocative columns, including “Hollywood Propaganda,” have been reprinted in this Journal.)

The Canadian Jewish Congress responded with a formal complaint against Collins and the North Shore News, charging that the column violated British Columbia’s amended Human Rights Act. As this free speech case came before the British Columbia Human Rights Tribunal, it attracted nationwide attention and commentary. In late 1997 the Tribunal decided the case by rejecting the CJC complaint, finding that Collins’ “Hollywood Propaganda” column “does not itself express hatred or contempt” in violation of a provincial “anti-hate” law. (For more on this, see “Canadian Jewish Congress Threatens Journalist for Holocaust Heresy,” in the Jan.-Feb. 1996 Journal, and “Victory for Collins and Free Speech in Holocaust Heresy Battle,” Jan.-Feb. 1998 Journal.)

A recipient of two of Canada’s most coveted awards for journalism, Collins’ career has included work as a reporter and commentator for several major Canadian daily papers and on television and radio. Here We Go Again! is his fourth book. His earlier works are P.O.W., a chronicle of his Second World War experiences, Immigration: The Destruction of English Canada, and The Best and Worst of Doug Collins, a 1987 collection of columns. Collins’ presentation at the 1990 IHR Conference, “Reflections on the Second World War, Free Speech and Revisionism,” was published in the Fall 1991 Journal.

United States readers can order Here We Go Again! by check or money order, made out to Doug Collins, for US $13.00, postpaid (or Can. $18.95), directly from: Doug Collins, [… Mr. Collins has passed away, so the address is no longer valid; ed.].