New Film Tries to Wash away the Myth that Germans Made Soap out of Jews. Why?

An Israeli film maker who is admittedly "obsessed" with the Holocaust is finally putting to rest the urban myth that the Germans used the remains of Jewish bodies to create bars of soap.

“Soaps,” a new film by director Eyal Ballas, 43, finds that the soap myth originated in World War I, when Germans were rumored to be turning bodies into a cleaning product. Of course, Ballas blames the Germans for reviving the ugly story, claiming that "SS guards would harass concentration camp members by threatening to kill them and turn them into soap."

In fact, The Crazy Soap Myth was promoted at the Nuremberg Trials. L. N. Smirnov, Chief Counselor of Justice for the USSR, declared to the Tribunal:

"... The same base, rationalized SS technical minds which created gas chambers and murder vans, began devising such methods of complete annihilation of human bodies, which would not only conceal the traces of their crimes, but also to serve in the manufacturing of certain products. In the Danzig Anatomical Institute, semi-industrial experiments in the production of soap from human bodies and the tanning of human skin for industrial purposes were carried out."

The focus of the tale was the Danzing Anatomical Institute. The Institute was the major source of skeletons for universities and schools. It appears that 100 to 200 bodies were used for that purpose yearly. Bodies were de-fleshed in large vats. Soviet investigators took the fatty mixture of human material left in the vats and presented it to the Tribunal as "soap.” 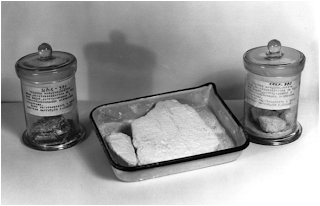 A picture of the gray disgusting material referred to as “soap.” (See exhibit USSR-393). It is totally unsuitable for cleaning anything. In fact, it would be a source of contamination wherever and upon whatever it was used.

The Soviets also claimed to have found a "human soap recipe" pinned to the wall of a German office. The True-Believer Nizkor (We will remember!) Web site, with one of the most remarkably crazy tales of the Holocaust story, quotes from a movie allegedly presented at Nuremberg:

"That day the blinding artificial lights were turned off in the courtroom, plunging it almost into darkness. In the wavering dim light the witness box was occupied by corpses…. The art of the courageous Soviet documentary film makers (some of whom are no longer alive) resurrected these corpses and brought them into the courtroom. It was as if they had risen from the grave and were hurling indisputable evidence in the defendant's faces. .. “  http://tinyurl.com/mpt9frh