CCLA supports Free Speech and an end to CHRC Censorship 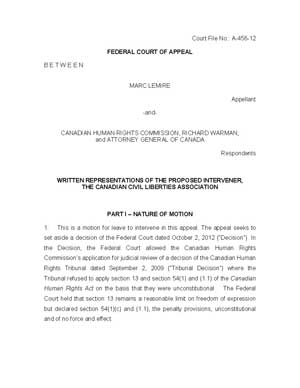 The CCLA's Amicus Curiae Brief, first page. Click on it to enlarge.

The Canadian Civil Liberties Association has filed an intervention application at the Federal Court of Appeals.  They are seeking to rid Canada of Section 13 of the Canadian Human Rights Act, which is Canada’s shameful Internet censorship legislation.  The CCLA recently described their intervention in the Lemire case as “The CCLA will be intervening to support the Tribunal’s ruling and the recognition of the chilling, self-censoring effect these laws can have on individuals.  The CCLA has long advocated that this law is a vague and unjustifiable restriction on freedom of expression that should be struck down.”

The Canadian Civil Liberties Association is one of Canada’s premier organizations protecting freedom of speech.  According to the Affidavit of Cara Zwibel, the CCLA was “Founded in 1964, the CCLA is a national organization dedicated to the furtherance of civil liberties in Canada … As a staunch defender of freedom of expression, the CCLA has made submissions and provided advice on a range of issues to various levels of government.”

Select submissions of the CCLA

17. As a component of the constitutional analysis, the CHRT considered evidence that respondents to section 13 complaints do not experience a conciliatory, preventative, and remedial process. Rather, the process is more prosecutorial in nature, with a focus on penalty and not prevention

19. The CCLA will submit that the Court’s conclusion in this respect constitutes an error of law. The CHRT has the jurisdiction to consider a constitutional challenge to its constating legislation. In fact, administrative tribunals are often in the best position to hear such challenges at first instance.25 Where administrative decision makers have explicit jurisdiction to consider constitutional challenges to their constating legislation, they must be permitted to conduct a full and comprehensive section 1 analysis.

20. A full and comprehensive section 1 analysis includes an assessment of the effect of the legislation. In the context of this case, the CHRT’s considerations addressed the heart of the Supreme Court’s finding in Taylor. An exploration of how the functioning of the scheme is experienced by respondents is a necessary component of an assessment of the chilling effect of the legislative restriction, particularly as it relates to future speakers.

21. Looking behind the text of the provisions was also required to assess whether the monetary penalty was administrative or punitive in nature. An understanding of the manner in which respondents experience the statutory scheme is highly probative and may tip the balance towards a more punitive interpretation. Again, this understanding is crucial to the section 1 analysis.

25. The “chill” on freedom of expression caused by the operation of sections 13 and 54(1)(c) and (1.1) of the CHRA is not remedied by carving off the penalty provisions and declaring them of no force and effect.

26. The very existence of section 54(1)(c) has coloured the underlying offence of hate messaging, making it more intrusive on free expression than originally envisioned by the Supreme Court in Taylor. The penalty provisions carry significant stigma, and by consequence, a “chilling effect” on free expression. This “chill” on speech captured by the scope of section 13 is not rectified by severing sections 54(1)(c) and (1.1).

30. The CCLA will submit that in the context of freedom of expression cases more generally, severance often serves to keep impugned statutory components “on the books” and thus contributes to an ongoing chill on free expression, undermining the attempt bring the statutory scheme on-side of the Charter. 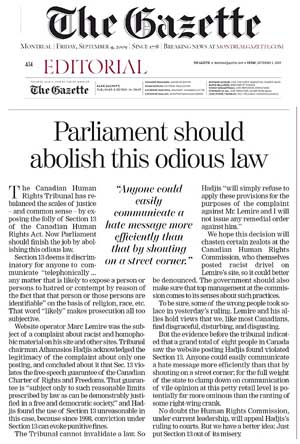 In 2003, serial plaintiff Richard Warman filed a Section 13 complaint against Marc Lemire for postings on the Freedomsite & its message board.  None of the initial posting complained about were written or approved by Marc Lemire, but because he was the webmaster of the message board, the CHRC has prosecuted him for 10+ years now.

Section 13 makes it an offence to "likely" "expose" privileged groups to "hatred and/or contempt." There are NO defences under Section 13!  Even truth and intent are considered irrelevant to a finding of discrimination.

The law was enacted in 1977 in order to silence a man named John Ross Taylor for messages he recorded onto his telephone answering machine.  In the intervening 30+ years, not a single person who has been hauled up on Section 13 charges has ever been acquitted - a 100% conviction rate.

Mainstream media outlets, from Victoria to Halifax, have demanded a repeal of Section 13 and denounced the human rights industry. Editorials commonly refer to the Tribunal as a "kangaroo court," and highlight how 'human rights' commissions  "threaten our liberty." 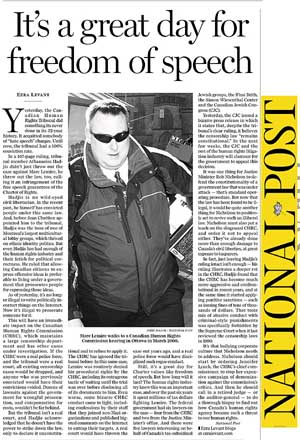 The case against Lemire dragged on for 10 years before the Canadian Human Rights Tribunal, and before the Federal Court of Canada, where the CHRC was forced to admit they spy on Canadian and American websites.

Since Marc Lemire and his courageous lawyer Barbara Kulaszka went to work, the entire landscape of Section 13 censorship has changed. On Sept 2, 2009, the Human Rights Tribunal fully acquitted Marc Lemire, and refused to apply Section 13 due to its unconstitutional provisions.

The case is currently before the Federal Court of Appeals. [more info]

Can I count on you to support the cause of freedom and rid Canada of this disgusting though control legislation? My courageous lawyer Barbara Kulaszka and I have demonstrated what two dedicated freedom fighters can accomplish against overwhelming odds. We have single-handedly and doggedly fought the system and exposed the corrupt underbelly of the "Human Rights" Commission's racket. Nothing ever comes easy when you are fighting such fanatical censors. This case is a seminal one, where the outcome will have serious implications on our right to think and speak freely in this country for generations to come. All Canadians will benefit when we manage to get this shameful law expunged from our legal books.

I cannot carry on this important fight alone. Your donations literally equal the survival of this case.

Marc Lemire is the only person to beat the CHRC in it's 33 year history!