Not Quite the Hitler Diaries

Gestapo Chief, more than seventy thousand copies of which have reportedly been sold, is the product of an inventive mind and much hard work. It purports to present long-suppressed secret documents with startling revelations about Third Reich Germany, Hitler, Roosevelt, Churchill, and the Second World War.

This book, and three others in the Gestapo Chief series, are based primarily on what the author claims are detailed revelations from Heinrich Müller, the Bavarian-born policeman who, from 1939 until 1945, was chief of the Gestapo, the Third Reich’s “Secret State Police” (Geheime Staatspolizei), a branch of the Reich Security Main Office (RSHA). He was the immediate boss, for example, of Adolf Eichmann, who headed the RSHA bureau that oversaw Germany’s wartime Jewish deportation program. Müller reported to RSHA chief Reinhard Heydrich (until his assassination in Prague in 1942), and then, until the end of the war, to Ernst Kaltenbrunner.

Just what happened to “Gestapo” Müller has never been satisfactorily established. He was last seen in Berlin in April 1945, vanishing in the chaos and turmoil of the great battle for the German capital shortly before the end of the war in Europe. His corpse has never been found. For decades rumors persisted that he escaped to South America, or that he worked for Soviet or American intelligence.

Half a century after the end of the war, an elusive American who sometimes calls himself “Gregory Douglas” emerged to present in Gestapo Chief what he claims is proof that in 1945 Müller escaped to Switzerland, where he was recruited by American intelligence. From December 1948 until 1952, “Douglas” contends, Müller lived in the Washington, DC, area, where he worked for U.S. military intelligence in the Truman administration, rising to the rank of U.S. Army brigadier general. According to “Douglas,” the former Gestapo commandant participated in high-level White House security conferences, and even met President Truman.

“Douglas” lays out this amazing story, with ever more tantalizing revelations from Müller, in four Gestapo Chief volumes issued by R. James Bender, a northern California publisher that specializes in militaria, especially of Third Reich Germany. In addition, the first volume in this series was published in Germany under the title Geheimakte Gestapo-Müller. Three of the four volumes are supposedly based on conversations between Müller in 1948 in Switzerland and an American intelligence agent named James Kronthal; the fourth is purportedly based on a private diary he kept while living in the United States.

In addition, this first volume contains extensive excerpts of what are claimed to be German intercepts of secret wartime trans-Atlantic telephone conversations between Franklin Roosevelt and Winston Churchill. In a purported conversation on November 26, 1941, President Roosevelt tells Churchill that a Japanese strike force is preparing to attack the U.S. naval base at Pearl Harbor, Hawaii, on the weekend of December 7–8, 1941. This “smoking gun” document seemingly proves that the American president knew in advance of the impending Japanese attack, and failed to give adequate warning to Pearl Harbor’s defenders.

Perhaps this book’s most sensational “revelation” is that Hitler did not commit suicide on April 30, 1945, as those who were with him in the final days of the war later unanimously testified, but instead escaped to Spain. Müller insists that, with his help, Hitler and his mistress, Eva Braun, left Berlin on April 22, 1945, and flew from Austria on the 26th in a special four-motor aircraft that arrived the next day in Barcelona. “Listen to me,” Müller tells his American interrogator. “Hitler went to Spain. I know for certain his plane landed safely …”

To confirm this testimony, the author presents what appears to be a facsimile reproduction of an authentic German document dated April 20, 1945. Headed “Special Führer journey to Barcelona,” and signed by Müller, it declares that “the Führer and his entourage will depart from airfield Hörching [near Linz] on April 26, 1945.” 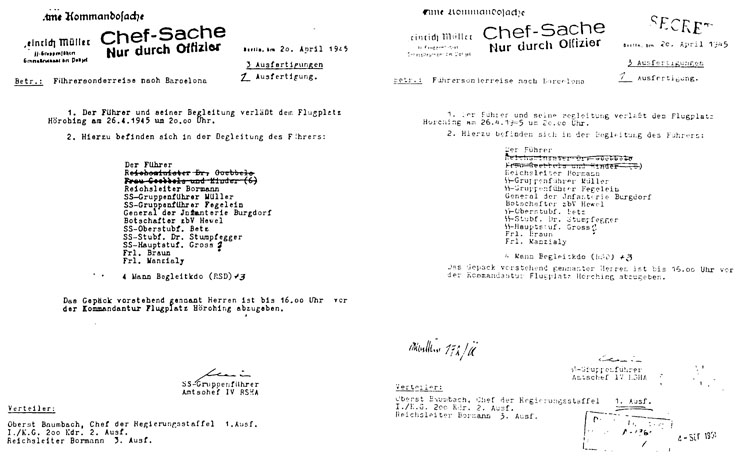 Each of these two "documents" has been presented by "Gregory Douglas" as a facsimile reproduction of a secret German document dated April 20, 1945. Headed "Special Fuhrer journey to Barcelona," it purports to be evidence that Adolf Hitler flew from Germany to Spain during the final weeks of the war in Europe. The version on the left, with "SS" rendered as normal typewriter letters, was published by "Douglas" along with an article by him in the spring 1990 issue of "The Military Advisory." The "corrected" version on the right, with "SS" rendered in runic letters, appears in the first volume of "Gestapo Chief" (p. 275). Both versions are fabrications, as are most of the "documents" presented in the "Gestapo Chief" series.

Müller says that, as part of the escape operation, he found a man who looked like Hitler to serve as a “double.” Thus, Müller says, Hitler’s wedding to Eva Braun in the Berlin bunker on April 28 or 29, 1945, was “pure theater.” Afterwards, Müller goes on, the “double” was shot and his body left so that the Russians would find it, to mislead them into believing they had discovered the Führer’s corpse.

My view that the Gestapo Chief series is an elaborate hoax is based not only on an examination of the books themselves, but on lengthy telephone conversations with the author. From these talks, I can attest that “Gregory Douglas” is intelligent, loquacious, knowledgeable, and literate, but also amoral, evasive, and vindictive. Those who have spoken at any length with him are struck by his chronic cynicism – a trait that, interestingly enough, is reflected in the words he attributes to Müller throughout the Gestapo Chief series.

The man who crafted this series of books is a known fabricator of documents who has used a variety of names over the years, including Peter Stahl, Samuel Prescot Bush, and Freiherr Von Mollendorf. His real name, apparently, is Peter Norton Birch or Peter Norwood Burch.

His son, with whom I have also spoken, sometimes fronts for his father as the author of the Gestapo Chief books. For more than a year the son has been living and working in Rockford, Illinois, under the name Gregory Douglas Alford. He is also a former staff writer for the Sun-Star newspaper of Merced, California, and the Journal-Standard of Freeport, Illinois. Apparently he has sometimes used the name Gregg Stahl.

David Irving, who is probably more familiar with wartime German documents than any other living historian, dismisses Gestapo Chief as “a carefully crafted historical novel.” Some years ago, Irving says, “Peter Stahl” tried to sell him forged documents. Another British historian, John Costello (author of Ten Days to Destiny and other works), whom I knew rather well until his death in August 1995, told me that Douglas/Stahl similarly tried to sell him wartime documents of dubious authenticity. 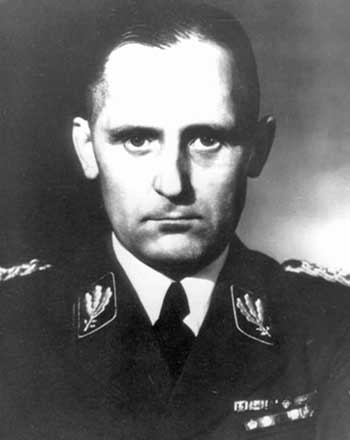 Perhaps the most obviously suspect feature of the Gestapo Chief series is that the author will not permit any independent examination of his “original” documents. (To be sure, not all the documents he presents are fraudulent. To add credibility to his book, “Douglas” includes, among his forgeries, a number of indisputably authentic wartime documents.)

During one telephone conversation, “Douglas” told me with some pride that his book would soon be coming out in German, and that the 1948 Müller interrogations were being translated into German. But how, I asked, was that possible, given that (as Gestapo Chief readers are told) these interrogations took place in German and the “original” transcripts are already in German. The normally suave and loquacious “Douglas” was at a loss for words.

Characteristic of this entire series is the clearly fraudulent “facsimile document” of April 20, 1945, presented on page 275 of Gestapo Chief. This is actually the author’s second, “corrected” version. The first appeared with an article he wrote for the spring 1990 issue of The Military Advisor, a magazine issued by the same firm that publishes Gestapo Chief. But whereas the “SS” characters are rendered in this earlier “facsimile” as normal typescript letters, they are rendered in Gestapo Chief as “lightning bolt” runes.

How did these amazing documents come into the author’s possession? In Gestapo Chief, the first volume of the series, “Douglas” tells the reader that “In the early 1980s, by means that are not of concern here, all of Müller’s personal files came into private hands.” Later “Douglas” claimed that Müller personally gave him these extraordinary documents (Spotlight, Jan. 6, 1997). In another Spotlight interview (Nov. 9, 1998), “Douglas” claimed to have met Müller in 1963, and to have known him well until his death in 1983. Remarkably, no mention of this twenty-year relationship appears in volume one of Gestapo Chief.

To credit Douglas’ fantastic yarns requires one to accept that Hitler’s personal and political testaments of April 29, 1945, are phony, and that all those who were with him in the final days in the Berlin bunker, and who survived the war, conspired for decades in a lie to hide the German leader’s escape to Spain. These persons include Hans Baur, Hitler’s pilot; Traudl Junge, the secretary who typed Hitler’s final testament; the pilot Hanna Reitsch; Otto Günsche, Hitler’s personal adjutant, who carried the body of Eva Braun from the bunker up to the courtyard where it was burned; Erich Kempka, the chauffeur who helped burn the bodies of Hitler and his wife; Heinz Linge, Hitler’s valet; and Artur Axmann, the Hitler Youth leader (Linge and Axmann later testified to having seen Hitler’s corpse). Some of these witnesses were questioned by British historians Hugh Trevor-Roper and David Irving; others, during Soviet captivity, by the Russians. Their stories tally.

Finally, it is utterly implausible to believe that Hitler would have vanished without trace after arriving in Spain, and that not a single one of the many persons who would have noticed his arrival there has ever spoken of it.

How has “Douglas” gotten away with his fraud? One important factor has been the unwavering support he’s received for years from Willis Carto. In spite of repeated warnings that “Douglas” is a liar and that his Gestapo Chief books are frauds, Carto has steadfastly promoted “Douglas” and his books in two periodicals he controls: The Spotlight, the weekly Liberty Lobby tabloid, and The Barnes Review, a bi-monthly history magazine.

For years Carto has promoted and offered for sale the Gestapo Chief series through the Barnes Review book club. He has arranged for publication of numerous articles by and interviews with “Gregory Douglas.” Typical is a Spotlight interview (Jan. 5–12, 1998) headlined “Establishment Can’t Keep Lid on Blockbuster Gestapo Books.” Another uncritical interview with “Douglas” appeared in the April 1997 Barnes Review. A few months later, the November 1997 issue of The Barnes Review featured a laudatory review of the second Gestapo Chief volume. Written by veteran Spotlight staff writer Fred Blahut, it assures readers that “Douglas proves, beyond a reasonable doubt, that Muller did, indeed, survive [the war] and was, in fact, interrogated by the CIA. Following these extensive sessions, he was employed and moved to Washington … He was a key player in the Cold War … Douglas presents the facts and lets the chips fall where they may.”

Gestapo Chief is a fraud nearly as audacious as the notorious “Hitler Diaries” hoax of 1983. For those who care about accurate and honest historiography, the case of Gestapo Chief is an instructive one.