The palm tree, known to botanists by the Latin name Phoenix dactylifera, is an ancient tree that has been grown in Iraq for thousands of years. There are about 450 varieties (cultivars) in Iraq. They vary in size, shape, and color. 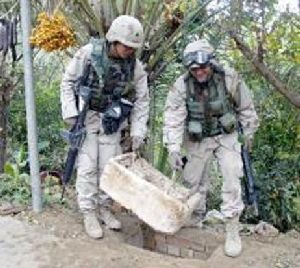 Scene from footage of U.S. Army as broadcast by world media, allegedly depicting U.S. soldiers after the capture of Saddam Hussein in December 2003, showing the ‘rat hole’ in which they claim to have found the former Iraqi dictator. In the background, to the left top of the right shoulder of the soldier on the left, a bunch of orange-colored dates can be seen hanging down from a date palm tree. In the northern hemisphere, dates have this color only between July and early September.

The life cycle of dates begins with pollination. The waxy cream-colored pollen grains from a male tree are manually transferred to the small fragrant whitish flowers on female trees. These are borne on a branched spadix divided into 25 to 150 strands 30 to 75 cm long. In Iraq and the rest of the Northern Hemisphere, pollination takes place in spring. The ovaries of the female flowers then begin to swell and grow into that delicious fruit.

The date fruit is initially green and astringent. It is not edible until it reaches full size and its color becomes red or yellow, depending on the variety. The fruit is then fleshy and crunchy. Some varieties ripen earlier than others. We will assume for the purposes of this discussion that the yellow dates in the photo belong to the latest of varieties. We would then assume that the photo was taken toward the end of September at the latest, when the fruit begins to change color from yellow to brown.

If the fruit is not harvested, it will fully ripen and fall from the tree in October. By the end of October, it would be a miracle if any of these yellow dates were still on any palm tree in Iraq.

However, the Pentagon spin machine is trying to dupe us all by telling us that this photo was taken in December. It shows two American soldiers lifting the lid off that elaborate "spider hole," in which they claim they have found Saddam Hussein. Behind the two soldiers, a palm tree stands proud, bearing its delicious yellow fruit. If the spin machine can lie against the testimony of that poor innocent palm tree, then that spin machine is capable of any fabrication.

They also gave us an account of what happened on that day, and how the cowardly Saddam Hussein begged for his life. But they never told us why they failed to capture that historic moment on video. It would be quite convincing if we could hear the man or see him with his hands up, just as we have seen that proud palm tree showing its yellow dates. Instead, we could only hear the yelping of Jewish presenters on CNN and Fox News gloating over the successful operation. We also heard later of how Ariel Sharon spent the night in Baghdad celebrating with his American subordinates.

If they lied about the time they captured Saddam Hussein, it would be sound to assume that the tale they are telling us about his cowardice is sheer fabrication. The man would never have surrendered unless he was gassed before they grabbed him. He would have been aware of the level of American brutality as demonstrated in the rare photos slipping out of Guantanamo Bay. He must have considered again and again how he would react in that critical moment, while contemplating in his hideout. His reaction would surpass that of his brave sons, who commanded respect by holding several hundred cowardly US invaders at bay, before their bodies were riddled with bullets beyond recognition. Such would be the bravery of a man of the caliber of Saddam Hussein.

Edited and compiled by Abdelouahhab Zaid

[…] Whole dates are harvested and marketed at three stages of their development. The choice for harvesting at one or another stage depends on varietal characteristics, climatological conditions and market demand.

The three stages are as follows:

Harvesting in the northern hemisphere takes place at the end of summer and in the fall, starting at the end of July (depending on the geographical area), with the harvesting of the Khalal varieties (especially Barhee), and ending in the middle of November [with the Tamar varieties]."