Until very recently, a map clearly predating Columbus’s first voyage of discovery was widely considered evidence that Norsemen had “discovered” North America first. In fact, at the time it came to light (that is, onto the market), it constituted the best, if not the only evidence of this notion; discovery and dating of Norse settlements in Newfoundland coming only some years after the map’s first sale and purchase. Suddenly, the map is now seen to be a fake dating from about 1956, and all the studies of the map’s parchment and ink (the first, ancient, the second, recent), its content (the north coast of Greenland, which no one had mapped until 1896), and its philology (archaic Latinate forms of Norse names) were cast into irrelevance by a certain almost-casual investigator’s organization of a few already-known historical facts into a narrative that beggars refutation.

The incident constitutes a compact little gem of what I regard as “perfect revisionism,” in that: (a) it demolishes predominant historical opinion; (b) it is entirely based on information previously known, but not previously considered in the investigations; and (c) the findings themselves are immune to any suspicion of any revisionist agenda beyond that of the map’s authenticity, since pre-Columbian Norse settlements in North America have long been everywhere recognized (e.g., at l’Anse aux Meadows, Newfoundland, discovered in 1960).

The “discoveries”—arguments, really—of “independent researcher” John Paul Floyd are described in an article in the London Daily Mail as derived from Google searches. The key items seem to be, in chronological order, first, two negative incidents, in which the presence of the map would have to have been mentioned, but had not been, and then a positive incident in which the volume in which the map was found had been stolen and had remained in the hands of the thief for some years, during which, Floyd persuasively surmises, the forgery was added to the blank sides of 15th-Century parchments bearing other documents from the times, that had been long well known. 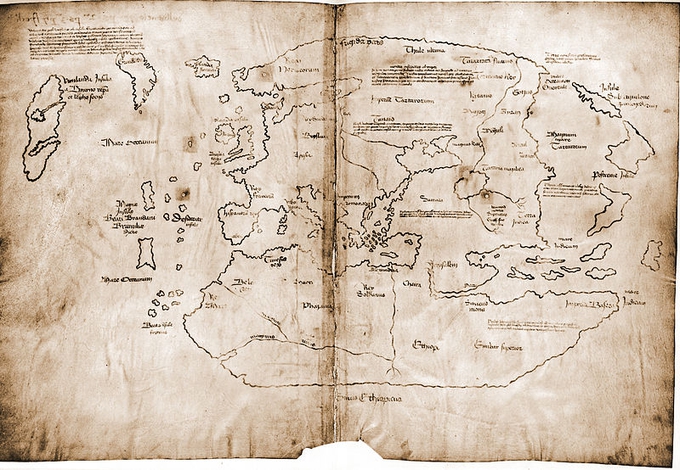 The Vinland map is purportedly a 15th century Mappa Mundi, redrawn from a 13th century original. Drawn with black ink on animal skin, if authentic the map is the first known depiction of the North American coastline, created before Columbus' 1492 voyage. Several scholars and scientists who have studied the map have concluded that it is a fake, probably drawn on old parchment in the 20th century.

The original impetus for the creation and marketing of the forgery would appear to be economic profit—the inspiration for much harmful, and probably more beneficient enterprise in human society. At the time the forgery must have been committed, the documents among which it came to light were in the possession of Enzo Ferrajoli, who after its sale was convicted of having stolen the documents, along with hundreds of others, from the Zaragoza (Spain) Cathedral Library in the 1950s—only a few years before the map came to light.

But Floyd’s most-potent evidence is negative—reports and observations that were lacking in earlier displays of the contextual documents, including one in 1892, the Madrid quadricentennial of Columbus’s epic first voyage, in which context one might very much expect the presence of such a map to be noted. Such a historical omission recalls omissions from those accounts (that are demonstrably free of the taint of war-crimes trials) of life in National Socialist concentration camps that omit mention of gas chambers, or the cremation of thousands of bodies every day, or all the other impossibilities of genocide so conducted as to leave no physical (or documentary) traces of their occurrence. Like today’s researchers of the reports of contemporary victims of the Holocaust, Floyd provides a further absence of comment from Cristóbal Pérez Pastor, who in 1926 recorded observations of the volume in which the map was subsequently discovered. Again, the absence of mention is truly deafening.

In the case at hand, an insufficiency of “forensic” methods might be inferred. That is, minute, scientific investigations of the parchment (genuine) and ink (cleverly contrived), along with the binding, and even wormholes in, the physical materials of the map tended to support—or failed to refute—the genuineness of the map’s provenance. Revisionists such as Carlo Mattogno and Germar Rudolf specialize in just such forensic analyses of predominant accounts of German treatment of prisoners of war and disfavored minorities during World War II, and the implications of their findings resonate far and wide, at least among those concerned with such matters who are not blinded by attachment to hostile ideologies. Of these methods, it strikes me that their power to refute is rather greater than their power to confirm. A recent example from the 1980s that comes to mind is that of the famous “Hitler Diaries” that ultimately were shown to have been written in volumes stitched with nylon threads, which were not in use in Germany at the time the diaries would have to have been written. The value of physical forensics for the purposes of refutation remains unimpeached by the case at hand.

In the opus published thus far by Inconvenient History, the meticulous work of Thomas Kues stands out as exemplifying that vector of revisionism that bases itself on material that is, and always has been, available to the public, but which previously has been, accidentally or otherwise, omitted from the narrative. He draws his instances, consistently, from sources (e.g., the Jewish Telegraphic Agency) that were not, at least at the time, motivated by idealistic considerations such as those today motivating sources and commentators far and wide, especially those having in their names the first word of the JTA. Sources must be qualified, and understood, not only according to their institutional and financial connections, but according to the times at which they made their reports (during World War II, Jewish agencies in general were subject to an imperative that they not allow the conflict in which the United States had become involved to be perceived as an effort to “save the Jews”).

The Vinland Maps incident, free as it is from parochial stresses, provides a rare opportunity to note the value of revisionism in finding and presenting truths in history previously occluded by economic self-interest or, more commonly, propagandistic agendas pursued by one or another (or more) parties contending for the hearts and minds of the not-deeply committed masses.

It is refreshing, interesting, and instructive.