Ever-vigilant American television, newspapers and magazines take care to play up outbursts of "hate," especially incidents against Jews. No where is the danger of anti-Semitism more alarming than in Germany, we are constantly told.

As part of the ceaseless Holocaust campaign, the media treats anti-Jewish incidents in Germany as especially ominous. Because of Hitler and the Third Reich experience, we are repeatedly reminded, Germans are never quite trustworthy, and – even after half a century – they remain on parole. Jewish groups and their media allies closely "monitor" the country for any signs of resurgent "neo-Nazism." Anti-Jewish incidents in Germany, such as a wave of desecrations of Jewish cemeteries in the early 1960s, are highlighted, especially in the United States, as further proof that the Germans just can't be trusted.

In fact, many West German neo-Nazi and anti-Jewish incidents were actually staged by agents of the former East Berlin Communist regime, as the records of former East German government agencies reveal.

For decades, the long-hidden files show East Berlin agencies organized "right wing extremist" and anti-Jewish actions in the West German federal republic. Even more remarkable, the two German Communist officials most responsible for these anti-Jewish actions were themselves Jewish: Markus Wolf, son of Jewish-Communist writer Friedrich Wolf, was for 33 years chief of East Germany's Ministry for State Security, the secret police agency known as the "Stasi." He worked closely with Albert Norden, the chief of East Germany's propaganda machine and a member of the East Berlin Communist party Politbüro. Norden was born in Upper Silesia, the son of a rabbi.

Details about how these Jewish Communist officials engineered "right wing" anti-Jewish incidents in western Germany are revealed by German-Jewish historian and university lecturer Dr. Michael Wolffsohn in his book Die Deutschland-Akte ("The Germany File"). He writes: "The strategic head of the staged anti-Semitic actions was Albert Norden, a rabbi's son. This is documented in the records of the [East Berlin] Politbüro." 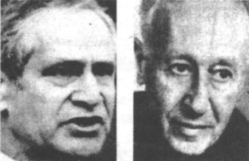 At Wolf's direction, Stasi bureau XX/4 launched its anti-Semitic campaign, code-named "Operation Forget Me Not," on May 3, 1961, to coincide with the trial in Jerusalem of wartime SS officer Adolf Eichmann. Stasi specialists produced anti-Jewish pamphlets that were seemingly printed and distributed in West Germany by "right wing extremists." One supposedly published by the German Reich Party (DRP) appealed for donations on behalf of Eichmann. Although the DRP emphatically denied responsibility for the publication, the media rejected these denials as lies. As a consequence, the DRP was discredited as a credible political factor.

Another Stasi publication supposedly put out by the "Comrades of the Waffen SS" (and dated April 20, Hitler's birthday) declared: "International Jewry with its plutocracy spreads horror tales. Through the Eichmann trial the Jewish underworld seeks to besmirch our honor, which is our loyalty. This must stop." Stickers issued by the "Comrades of the Waffen SS" appeared in downtown Munich setting off a flurry of alarmed newspaper headlines.

As part of another Stasi effort, this one codenamed "Operation J," phony anti-Semitic hate letters were mailed to Jewish community centers and individual Jews throughout West Germany. One read: Obviously you Jews have not yet grasped that you must disappear from Germany. Apparently it wasn't enough that we gassed six million of you." And: "Your extermination has only been interrupted. We know all of you." "We will avenge our comrade Eichmann. Germany awake!" Other Stasi-produced letters to German Jews read simply: "You Jewish pigs!"

"Operation J" Stasi agents also manufactured "protest letters," supposedly written by German Jews, that were mailed to prominent political and media figures. "Out of fear of the Nazis I must remain anonymous," declared the supposed writers of these unsigned letters.

A wave of swastika daubings on buildings throughout West Germany in December 1959 and January 1960 was actually organized by the East German Stasi and its Soviet Russian counterpart, the KGB. 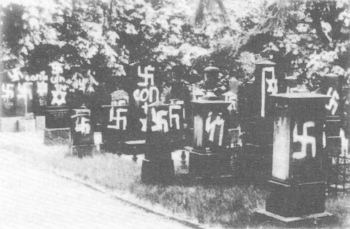 Gravestones in a Jewish cemetery in Mainz, western Germany, smeared with swastikas, SS runes and Stars of David. Many such highly-publicized incidents were engineered by East Berlin Communist agents. During the Third Reich era itself, such incidents were all but unthinkable, if only because most Germans would have regarded such daubings as disparaging of patriotic symbols. Most Jewish cemeteries in Germany survived the 12 years of the Third Reich intact.

These incidents received intense media coverage around the world, touching off an international storm of anti-German propaganda and outraged cries about the supposed danger of "Neo-Nazism" in West Germany.

On this little-known chapter of history, the German-language Israeli daily paper Israel Nachrichten has reported:

To serve its own purposes, the State Security [Ministry] infiltrated the right-wing scene in the [West German] Federal Republic. In December 1959 it gave the order to paint West German synagogues with swastikas. This created a scandal: Bonn was brought into disrepute. Two years later the Stasi generals hatched "Operation Forget Me Not." They manufactured anti-Jewish smear sheets for distribution in West Germany. Nothing was left to chance. Even thinking ahead to the panic-stricken Jewish reaction, they produced letters in which formerly persecuted persons announced their flight from West Germany. This would prove to the entire world that only the [East] German Democratic Republic had overcome fascism. Accordingly, Pankow [East Berlin] represented the democratic Germany, while Bonn represented a brown [fascist] monster.

Jewish cemetery desecration incidents – highlighted in newspapers and magazines around the world – served to discredit the West German Federal Republic, and to bolster the "progressive" and "anti-fascist" image of the East Berlin regime.

The head of the "Federal Office for Constitutional Protection," Eckert Werthebach, confirmed in April 1991 that East Berlin agents had helped organize "neo-Nazi" activities during the 1960s and 1970s. Several neo-Nazi activists, he confirmed, had actually been Stasi agents. This was a "perverse connection," he said, "but when it involved destabilizing the Federal Republic, any means were valid for the Stasi."

"Life is worthwhile only when it is filled with great dedication."
—Leon Degrelle