Pope Pius XII and the Jews

The following are what I consider some important points in the behavior of the wartime Pope Pius XII in relation to the Nazi persecutions of the Jews. The rough situation is that, while the Vatican aided Jews, especially Italian Jews, Pius XII was relatively silent about "extermination". My explanation for this silence needs no lengthy elucidation.

Despite the great controversy, the role of Pius XII does need some elucidation. This is not intended as a summary of his papacy, or of his wartime behavior, or even as a full treatment of his behavior in relation to the persecutions of the Jews. Rather, the emphasis here is on those facts which I believe receive insufficient attention in contemporary debate on this subject. Much, though not all, of this material appears in Appendix E of my book The Hoax of the Twentieth Century. Much documentation is given there or in other books I cite here, so here only some of the most important sources are given.

Eugenio Pacelli, who was to become Pope Pius XII in 1939, was Papal Nuncio in Germany during the Twenties. In 1930 he returned to Rome as the newly appointed Vatican Secretary of State under Pius XI. There he played an important role in negotiating, with the Hitler government, the 1933 Concordat between the Roman Catholic Church and Germany. 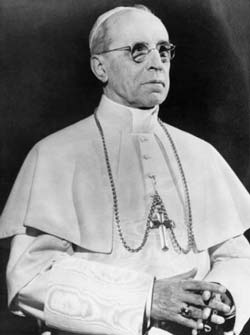 He is also commonly credited with authoring the 1937 papal encyclical Mit Brennender Sorge. Released in German rather than the customary Latin, it expressed the deep differences between the Catholic Church and the Nazi movement, which had been developing ever since the Concordat. Youth education was a particularly contentious issue. After Pius XI died early in 1939, Pacelli became Pope Pius XII, six months before the outbreak of war in Europe.

The Jewish "extermination" claims started in a subdued form in mid-1942. In his Christmas message for 1942, Pius XII made a passing remark, without specific reference to the Jews, to "the hundreds of thousands who, through no fault of their own, and solely because of their nation or race, have been condemned to death or progressive extinction." This is usually interpreted as a reference to genocidal persecutions of Jews, and that interpretation is arguable, but the context in which the statement was made is very revealing.

As is clear from the Vatican's published documents, the overriding objective of Vatican diplomacy at the time was the securing of an Allied pledge to not bomb Rome.

On 14 December 1942 the Vatican Secretary of State, Cardinal Maglione, met with the British Minister to the Vatican, F. D'Arcy Osborne, to this end. Maglione's notes on the meeting present Osborne as suddenly changing the subject from the possible bombing of Rome to demanding that the Vatican "intervene to stop the massacres of the Jews".[1]

In reading Maglione's notes it is evident that the Pope's remark in his Christmas message was made under duress; Osborne made it seem to Maglione that the alternative was bombs. It is probably not the case that the Allied governments instructed Osborne to propose such a deal; perhaps the matter was on Osborne's mind only because an Allied declaration on the Jews was soon to come (17 December). However it is the case that Maglione's notes indicate that he thought such a deal was being proposed. This is the context of the remarks in the Christmas 1942 message of Pius XII. The Allies wanted something stronger and later urged Pius XII to endorse their declaration of 17 December, but he refused because "he felt that there had been some exaggeration for the purposes of propaganda."[2]

Pius XII made a remark, similar to that in his Christmas message, in a long address on 2 June 1943. Rome was first bombed on 19 July 1943 and I am not aware of any repetition of the Christmas remark, or of any like it, by Pius XII after Rome was bombed. He even said nothing about exterminations of Jews after the Germans had been driven out of Rome and there could have been no danger in making such a declaration.

After the Nazis were defeated, Pius XII made an address to the College of Cardinals (2 June 1945) in which he condemned "applications of national socialist (i.e. Nazi) teachings, which even went so far as to use the most exquisite scientific methods to torture or eliminate people who were often innocent". However reading further into the speech it becomes clear that the Pope, like so many other people at the time, was thinking of the catastrophic scenes found in the German camps at the end of the war. The only specific victims mentioned were the Catholic priests who died at Dachau. There is nothing in the address about extermination of any racial, religious or national group.[3]

None of this is to imply that the Vatican under Pope Pius XII ignored the plight of the Jews. Its help to Italian Jews during the German occupation is well known. For example, several thousand Jews were given refuge in the Vatican after the Germans occupied Rome in 1943, and there were many other ways the Vatican helped Jews.[4]

In spring 1944, after the Germans had been driven out of Rome, Jews were able to come out of hiding. The joyous American Jewish Committee arranged a special broadcast, over a New York radio station, of a thanksgiving service by the Chief Rabbi of Rome, Israele Anton Zolli.[5] I have no record of the broadcast or service, but I assume that Zolli expressed the sort of gratitude to Pius XII, for helping Jews, that he was loudly expressing at the time.[6]

Zolli was to go further. Partly out of "his gratitude (to Pius XII) on behalf of the Jewish community for aid offered during the German occupation", Zolli, "the spiritual head of the oldest Jewish community of Europe", converted to Roman Catholicism in February 1945, taking the baptismal name Eugenio, to honor the Pope.[7]

Zolli was not isolated in his gratitude. In November 1945 Jewish survivors of Nazi concentration camps, received by Pius XII, "thanked the pontiff for the generosity he had manifested during the terrible period of Nazi fascism." In March 1946 the Italian Jewish communities, meeting in Rome, "paid homage to the pope and expressed their deepest gratitude" to the Catholic Church for its help.[8]

These are some of the facts that I believe are either absent from, or whose implications are not grasped in, the debates on the behavior of Pius XII. An eloquent defense of Pius XII is to be found at the Web site of the Catholic League for Religious and Civil Rights [now defunct; ed]. That defense even mentions the Zolli conversion, an episode sometimes considered too "sensitive" to be mentioned. However such defenses do not satisfactorily confront the heart of the accusation: Pius XII did not speak up forthrightly against "extermination". The only exception that can be cited is an ambiguous declaration which, my analysis shows, was made under the threat of Allied bombs.

Nevertheless Pius XII won the loudly expressed gratitude of contemporaneous Jewish communities for what he did do for the Jews, but the implications of that fact are not grasped. For me, there are two principal implications. First, under the circumstances that Pius XII was in, there is no reason why he would not have condemned exterminations of Jews forthrightly and unambiguously, if he had known of them. And if they had happened, he would have known of them.

Second, it is suggested that for those Jews the "extermination" was understood to be hyperbole, of a rhetorical substance not to be taken literally.

The defenders of Pius XII will have a difficult time if they do not understand these implications of the facts easily available in the historical record, and if they continue to sidestep the heart of the accusation.

Related matters are taken up in my obituary of Robert A. Graham (published in the March-April 1998 Journal, pp. 24-25)..

See also The Vatican During the "Holocaust".