On January 20, 1997, Bill Clinton began his second term as President with a swearing-in ceremony at the White House followed by an inaugural address. During the first few minutes of this speech, Clinton briefly surveyed the history of the past ten decades:

What a century it has been. America became the world’s mightiest industrial power; saved the world from tyranny in two world wars and a long Cold War; and time and again, reached across the globe to millions who longed for the blessings of liberty.

Not only do these proud, even boastful words contain historical lies, they manifest an arrogance that lays the groundwork for future calamity. In truth, in neither the first nor the second world wars did the United States “save the world from tyranny.” 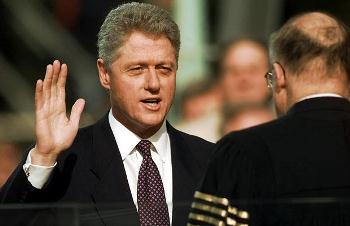 In his second inaugural address, President Clinton declared that the United States had "saved the world from tyranny in two world wars."

In April 1917, President Woodrow Wilson called for America’s entry into World War I by proclaiming that “the world must be made safe for democracy.” On another occasion, he declared that US participation in the conflict would make it a “war to end war.” To secure support for this crusade, newspapers and political leaders, and an official US government propaganda agency, portrayed Germany as a power-mad tyranny that threatened the liberty of the world.

However, within just a few years after the November 1918 armistice that ended the fighting, this wartime propaganda image was widely recognized as absurd. Today no serious historian regards Wilhelmine Germany as a “tyranny,” or believes that it posed any kind of threat to the United States, much less “the world.”

Ironically, America’s principal allies in World War I – Britain and France – were at the time the world’s greatest imperial powers. (A sore point for many Americans of Irish background was Britain’s control of Ireland.) Many in the United States regarded Britain, not Germany, as the foremost threat to world liberty, recalling that Americans had waged a bitter, drawn-out war for independence from British rule (1775–1783), and that during a second war with the same country (1812–1814) British troops had sacked and burned down the US capital.

President Clinton’s distortion of history is even more glaring with regard to the Second World War. America’s two most important military allies in that conflict were the foremost imperialist power (Britain) and the cruelest tyranny (Soviet Russia).

During both world wars, Britain ruled a vast global empire, subjugating millions against their will in what are now India, Pakistan, South Africa, Palestine/Israel, Egypt and Malaysia, to name but a few. America’s other great wartime ally, Stalinist Russia, was, by any objective measure, a vastly more cruel despotism than Hitler’s Germany.

If the US had not intervened in World War II, Germany and its allies might have succeeded in vanquishing Soviet Communism. A victory of the Axis powers also would have meant no Communist subjugation of eastern Europe and China, no protracted East-West “Cold War,” and no “hot wars” in Korea and Vietnam.

Today’s political and intellectual leaders seem eager to whitewash or forget the Soviet role in the World War II, or America’s cordial wartime alliance with Soviet Russia and its leader. To solidify the Allied coalition – formally known as the “United Nations” – President Franklin Roosevelt, British Prime Minister Winston Churchill, and Soviet premier Joseph Stalin met together in person on two occasions: in November 1943 at Teheran, Iran, and in February 1945 in Yalta, Crimea.

In a joint declaration issued at the conclusion of the Teheran meeting, the three leaders expressed “our determination that our nations shall work together in war and in the peace that will follow.” The “Big Three” continued:

We recognize fully the supreme responsibility resting upon us and all the United Nations to make a peace which will command the good will of the overwhelming mass of the peoples of the world and banish the scourge and terror of war for many generations.

We shall seek the cooperation and active participation of all nations, large and small, whose peoples in heart and mind are dedicated, as are our own peoples, to the elimination of tyranny and slavery, oppression and intolerance. We will welcome them, as they may choose to come, into a world family of democratic nations.

... Emerging from these cordial conferences we look with confidence to the day when all the peoples of the word may live free, untouched by tyranny, according to their varying desires and their own consciences.

To emphasize the trusting nature of their alliance, Roosevelt, Churchill and Stalin concluded their joint statement with the words: “We came here with hope and determination. We leave here, friends in fact, in spirit and in purpose.”

The wartime leaders of the United States, Britain and Soviet Russia accomplished precisely what they accused the Axis leaders of Germany, Italy and Japan of conspiring to achieve: world domination. At the Teheran, Yalta and Potsdam conferences, and in crass violation of their own loftily proclaimed principles, the US, British and Soviet leaders disposed of millions of people with no regard for their wishes (most tragically, perhaps, in the case of Poland). To insure the rule of the victorious Allied powers after the war, the “Big Three” established the United Nations organization to function as a permanent global police force.

Many Americans recall their country’s role in the Vietnam war, and other overseas military adventures since 1945, with embarrassment and even shame. But most Americans – whether they call themselves conservative or liberal – like to regard World War II as “the good war,” a morally unambiguous conflict between Good and Evil. So successfully have politicians and intellectual leaders, together with the mass media, promoted this childish, self-righteous view of history, that President Clinton could be confident that it would be accepted without objection.

The President’s distortion of history is all the more remarkable considering that in this same inaugural speech he proclaimed the dawning of an “information age” in which “education will be every citizen’s most prized possession.”

How a nation views the past is not a trivial or merely academic exercise. Our perspective on history profoundly shapes our actions in the present, often with grave consequences for the future. Drawing conclusions from our understanding of the past, we make or support policies that greatly impact the lives of millions.

During the late 1960s and early 1970s, for example, political leaders, journalists and scholars often rationalized and justified America’s ill-fated role in the Vietnam war on the basis of a badly distorted understanding of Third Reich Germany, drawing faulty historical parallels between Ho Chi Minh and Hitler, with erroneous references to the September 1938 Munich Conference.

The hubris of Clinton’s portrayal of history is not merely an affront against historical truth, it is dangerous because it sanctions potentially even more calamitous military adventures in the future. After all, if the United States was as righteous and as successful as the President says it was in “saving the world” in two world wars, why would anyone oppose similar world-saving crusades in the future?