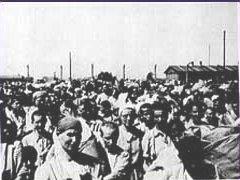 Original photo published in The Auschwitz Album (New York: Random House, 1981), p. 126 (photo 183). It shows Hungarian Jews shortly after their arrival at Auschwitz. They appear to be relaxed. 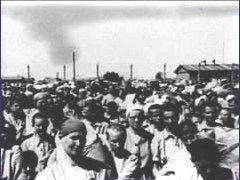 Falsified Photo. In 1997 the Simon Wiesenthal Center [SWC] posted the same photo on its Website captioned: "As these prisoners were being processed for slave labor, many of their friends and families were being gassed and burned in the ovens in the crematoria. The smoke can be seen in the background." It is dated "June 0, [sic] 1944."

The smoke is faked. It's been airbrushed in. There is no smoke to be seen in any Allied photo taken of Auschwitz and Birkenau during 1944. It is well known that crematoria do not emit such smoke. In this ludicrous and fraudulent artwork the "smoke" appears to be coming from a fence post.

After this fakery was exposed on the World Wide Web, the SWC cut the ONE LINE in its caption referring to "smoke," and the altered photo was replaced with the original. [see http://motlc.wiesenthal.com/gallery/pg22/pg0/pg22035.html (now removed, ed.)]. The SWC left the altered photo in another location, however, to exploit the all too vivid imaginations of students and journalists. [see http://motlc.wiesenthal.org/albums/palbum/p00/a0007p2.html (now removed, ed.)] Do a browser Search or Find for Hungarian arrivals after to reach the photo, about 2/3 of the way down the page in the left column.

This is one among scores of instances where those representing the Holocaust Industry have used faked photos, faked captions, and faked sources for photos to "prove" the unique monstrosity of Germans.

Why does the OUTRAGEOUSLY PROFITABLE Holocaust Industry continually falsify World War II incidents to supposedly "prove" that for which it claims to have "tons" of evidence?

The world awaits proof (real proof) that during World War II the Germans gassed ONE human being as part of a program of ethnic genocide. For a fresh insight to these issues, see David Irving's brilliant and courageous closing statement to the British High Court at: www.codoh.com .

Ignore the Thought Police.
Read the evidence. Judge for yourself.