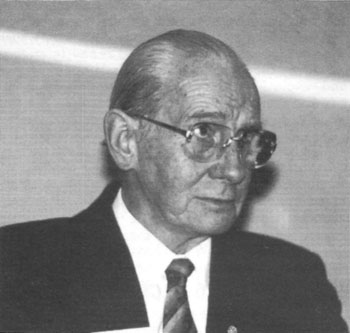 Remer at the Eighth IHR Conference, 1987

German courts have ordered an 82-year-old man in poor health to serve a 22-month prison sentence because he published articles rejecting claims of wartime mass killings in Auschwitz gas chambers.

In November 1993, the Federal High Court in Karlsruhe upheld the 1992 sentence of a district court, which found Otto Ernst Remer guilty of "popular incitement" and "incitement to racial hatred" because of statements disputing gas chamber claims that appeared in five issues of the widely circulated tabloid paper that bears his name, Remer Depesche ("Remer Dispatch").

Scores of young Germans signed petitions demanding the right to take Remer's place behind bars. "I am proud that there are young men today who share my convictions," commented Remer.

Remer, who is in poor health, was scheduled to begin serving his sentence on February 7 [1994]. Rather than go to prison, though, he went into hiding. According to some unconfirmed reports, Remer is now living in Russia. (For years he had been an outspoken advocate of cordial relations between Germany and Russia.) [This was a disinformation to cover his escape to Spain where he lived in peace until he passed away in 1997; ed.]

In Germany today, to dispute claims of mass killings in wartime concentration camps is regarded as a criminal attack against all Jews, who enjoy a privileged status there. Remer's "crime" was a non-violent expression of opinion. In most of the world, including the United States, his "criminal" statements are entirely permissible and legal expressions of views. Like other such so-called "Auschwitz Lie" cases, the Remer conviction points up Germany's special status among the world's nations. As one writer has put it, Germany remains on permanent probation.

The judges in the October 1992 trial in Schweinfurt flatly refused to consider any of the extensive evidence presented by Remer's attorneys. (For more on this case, see the March-April 1993 Journal, pp. 29-30.)

Remer, who addressed the Eighth IHR conference in 1987, is himself a historical figure. As a young officer in command of the Berlin guard regiment in July 1944, he played a key role in putting down the ill-fated attempt by conspirators to kill Hitler and seize power in a violent coup.

Remer was promoted, eventually to General, and at the end of the war was serving as a commander in Pomerania. For his extraordinary courage and daring in combat, he was awarded numerous military decorations, including the Knight's Cross with Oak Leaves. (Remer's essay, "My Role in Berlin on July 20, 1944," was published in the Spring 1988 Journal. His presentation at the 1987 IHR conference is available on both audio-and videotape from the IHR. [check www.ihr.org for current availability and price; ed.])