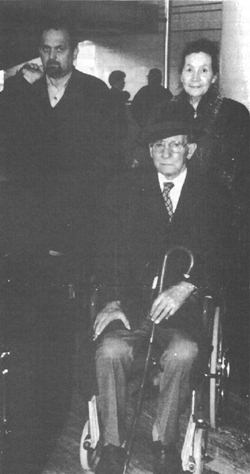 With his wife, Anneliese, and a friend, the 82-year-old, wheelchair-bound Otto-Ernst Remer arrives in Spain on February 5, 1994. He fled his homeland to evade a 22-month prison sentence in Germany for the "thought crime" of "Holocaust denial." He has applied for political asylum in Spain.

To evade a 22-month jail sentence in Germany for "denying the Holocaust," a retired German general has fled his homeland and is living in exile. Otto-Ernst Remer, a highly decorated Second World War officer, arrived in February 1994 in Spain, where he is seeking political asylum.

In November 1993 the German Federal High Court upheld an earlier district court sentence that found Remer guilty of "popular incitement" and "incitement to racial hatred" because of statements disputing gas chamber claims that appeared in five issues of a tabloid paper that bears his name, Remer Depesche. (See the March-April 1993 Journal, pp. 29-30, and the May-June 1994Journal, pp. 42-43.)

To dispute claims of mass killings in wartime concentration camps is regarded in Germany today as a criminal attack against all Jews, who enjoy a privileged status there.

"There were no [execution] gas chambers," Remer reaffirmed as he left Germany. "I stand by the expert report of Germar Rudolf," he added, referring to detailed forensic report of a young German chemist who has himself become a victim of Germany's legal system because of his views. (On the "Rudolf Report," see the Nov.-Dec. 1993 Journal, pp. 25-26. See also Rudolf's statement in the Nov.-Dec. 1994 Journal, pp. 14-15.)

On the basis of an international arrest warrant issued at the initiative of German officials, Remer was arrested by Spanish police on June 1, 1994, in Malaga. He was on his way to Madrid for a meeting at the Spanish Interior Ministry to argue his case for political asylum. A senior Spanish judge ordered Remer's immediate release pending a decision on his asylum application. Remer's transgression is not a crime in Spain, the judge declared. Spanish law forbids extradition for political crimes, except in cases of terrorism or similarly violent acts.

As a young officer in command of the Berlin guard regiment in July 1944, Remer played a key role in putting down the ill-fated attempt by conspirators to kill Hitler and seize power in a violent coup. Remer was promoted, eventually to General, and at the end of the war was serving as a commander in Pomerania. Wounded eight times in battle, he was awarded numerous military decorations for his extraordinary courage and daring in combat, including the Knight's Cross with Oak Leaves.

Media coverage of the Remer case has often been biased and inaccurate. For example, Remer is frequently referred to as an "SS man" or an "SS general." In fact, he was never associated with the SS.

The Simon Wiesenthal Center has announced its intention to "apply pressure" on Germany to force Remer's extradition from Spain.

Agitation for Remer's arrest followed his appearance on Spanish television, in which he reaffirmed his view that there were no wartime gas chamber killings of Jews. Appearing with him on Spanish television was Gerd Honsik, a native of Austria who publishes the German-language newsletter Halt!. In May 1992 Honsik was sentenced by a Vienna criminal court to 18 months imprisonment for rejecting claims of wartime killings of Jews in gas chambers. To evade this sentence, he fled to Spain.

In June 1993 Austrian authorities asked Interpol to execute a warrant for Honsik's arrest. In a rare show of defiance, Interpol rejected the application because the political nature of the offense. In July 1994 an Austrian judge declared that the charges against Honsik are "typical of precisely those which are to be regarded as political offenses." Honsik continues to publish his newsletter in Spain.

Remer addressed the Eighth IHR Conference in 1987. (His Conference presentation is available on both audio-and videotape from the IHR.) Remer's essay, "My Role in Berlin on July 20, 1994," was published in the Spring 1988 Journal.