Reply to Carlo Mattogno and the Editor on the Gas Detectors

I wish to reply to Carlo Mattogno’s articles on gas detectors for the crematorium at Auschwitz (TR, pp. 140–155, May 2004), and the editor’s prologue to those articles. In 1998 Mattogno and I wanted to air this issue in the Journal of Historical Review, but the editor declined to carry the exchange. I am grateful for this opportunity to do so. I shall assume the reader has studied the issue, not only in the aforementioned article, but also, and especially, in my original article,[1] and in Mattogno’s rebuttal of it.[2]

In the correspondence relating to the construction of crematorium II, the Central Construction Office telegraphed the furnace and crematorium oven maker Topf, on 26 February 1943, as follows:

Topfs reply was sent on 2 March and reads as follows:[3]

We confirm the receipt of your telegram, saying: ‘Send off immediately 10 gas testers as discussed. Hand in estimate later.’

In this regard we inform you that already two weeks ago we asked 5 different firms about the display devices for hydrogen cyanide residue [Anzeigegeräte für Blausäure-Reste] requested by you. We received negative answers from 3 firms, and from two others an answer is still outstanding.

In case we receive notification in this matter, we shall get close to you immediately so that you can get in contact with the firm producing these devices.”

In Mattogno’s present paper and its prologue there are three translations of “Anzeigegeräte,” namely “display devices” (pp. 140, 150), “indicators” (p. 141), and “gauges” (caption to Fig. III.6, p. 148). I have used the first here, though I used “detection devices” in my original paper. Note that there is a substantial distinction, since the terms “display devices” and “gauges” suggest continuous measurement, while “indicators” and “detection devices” suggest activation only at some critical threshold.

I want to especially note a feature of this letter that is as important as the reference to HCN (hydrogen cyanide): it expresses a failure to find a supplier of the desired devices. Mattogno expressed this as “Topf’s difficulty in locating them”.[4] However Mattogno effectively ignored this feature of the document, both in formulating his theory and in critiquing my theory. A second fault of his critique is that he inexplicably ignored a point that I took some pains to present clearly.

Mattogno’s Proposed Solution and Its Problems

Mattogno’s style is prolix, possibly because he has available a wealth of documents, and one must read long and carefully to discern his main thesis. It is this: the document as it comes to us makes no sense because it would have us believe that the furnace maker Topf was asked by the Central Construction Office to supply detectors of, or testers for, residual HCN from use of the pesticide Zyklon. That is the wrong department at Auschwitz going to the wrong source. This is so implausible that Mattogno believes that the document is a forgery, produced by taking an original document and substituting alternative words. Thus he would substitute “Rauchgasanalyse” (flue gas analysis) for “Blausäure-Reste” to have the document make sense.[5] His grounds are that for Topf a concern for flue gas was routine, and thus “simple flue gas analyzers,” as he puts it, for CO or other familiar gases must have been in question.

Mattogno’s analysis is masterful as regards the Zyklon, but nowhere in the present paper does he consider the possibility of a source of HCN other than Zyklon. Of course we cannot believe the document in his interpretation, for the reasons he gives. However by altering the document so that Topf is trying to fill a routine need, he worsens the situation because the document says the opposite. It says that what was being sought was not routine for Topf. It is wildly illogical to argue that we must replace a reference to an unusual need, with a reference to a routine need, when the document says it was unusual. While it is indeed not credible that Topf was asked to supply detectors of HCN generated by Zyklon, it is even more incredible that Topf said, as Mattogno would have us believe, that it can’t fill an order for, or even figure out a source of, “simple flue gas analyzers” for carbon monoxide (CO) or other common products of combustion. Topf would have had no trouble finding such things. I should add that even if, despite all the considerations Mattogno has adduced, Topf had been asked to supply detectors for HCN as a product of Zyklon, then Topf would have been able to figure out how or where to get them, despite the matter being outside its field.

Mattogno claims that if we make the substitution he proposes then “all problems discussed above disappear instantaneously!”[6] The problems disappear because he has replaced them with a new, insoluble, problem. He has thrown the baby out with the bathwater!

The document makes less sense if we make Mattogno’s substitution. For the forgery thesis to work, the whole received document must be thrown out. I can’t see any grounds for that, and Mattogno has not found such grounds.

My hypothesis is that the Central Construction Office asked Topf to supply detectors of HCN as a combustion product, a hazard that in 1943 had been known for only about a decade. On the last point I could have given more dates and documentation. The already cited 1977 paper by Y. Tsuchiya gives the historical background, at least for the USA.[7] After a great loss of life in the Cleveland Clinic fire due to fumes from burning X-ray films, J.C. Olsen conducted laboratory investigations that determined amounts of HCN generated by the incineration of nitro-cellulose film, wool, and silk, and reported the results in papers published in 1930 and 1933. In this regard, 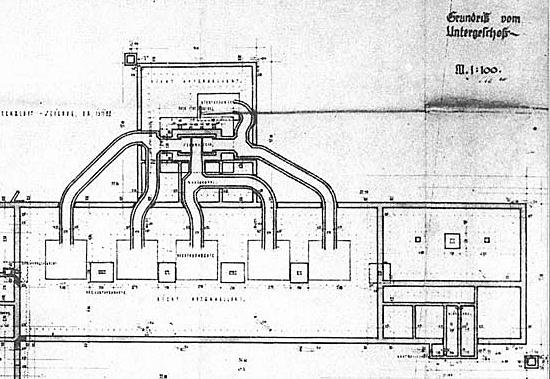 Fig. 1. Arrangement of flues and ducts for Auschwitz crematorium II.

I should note an error I made when I wrote “nylon and wool can release HCN when burned, a fact that has been known since the Thirties.” I should have written “silk and wool”. Nylon was not cited in the literature, apparently, until 1962.

The HCN detectors used with Zyklon would have been useless for the detection of HCN as a product of continuing combustion, because as Mattogno explained they were chemical kits designed to be used at specific times, i.e., immediately after disinfestations with Zyklon. If residual HCN as a combustion product was a concern in the crematorium/waste incinerator installation, then continuous monitoring of some sort would have been desired. Mattogno agrees that in context the Topf letter suggests a device for such continuous monitoring.

Topfs failure to find a source of the detectors must be taken into account in interpreting some of the things I wrote earlier. My style is terse, and this perhaps leads to misunderstandings. For example, Mattogno ridiculed my suggestion that “perhaps a detector [of HCN] generating an audible alarm was desired,” on the grounds that such devices did not exist. But that would explain perfectly why they weren’t found! I never said they existed. I have surmised that in 1943 a concern for HCN as a combustion product was relatively novel, and practicing engineers could have been somewhat uncertain on how, or what was available, to deal with it.

Another point I have emphasized in this controversy is the odd design of the crematorium II chimney. I attempted to clearly lay this out in my original article, via the reproduction of an engineering drawing of the flues and ducts for the crematorium. In order to make this clear, I again reproduce this drawing as Fig. 1.[8] The duct running between the waste incinerator (the “Müllverbrennungsofen” that appears as the uppermost part of the installation) and one of the cremation ovens is clearly visible on the right side of the drawing. The chimney stands between the waste incinerator and the five cremation ovens, and a common duct conducts the effluents of the waste incinerator and the right-most of the five ovens to the chimney. When I said that the design of the waste incinerator was “novel,” I meant with respect to the chimney flues; I didn’t mean the combustion chamber was novel.

Mattogno ignored this crucial point and argued that for my suggestion to work the flue gases of the waste incinerator would have to exit the chimney at a height of 16 m and then somehow make their way back into the crematorium. That is impossible. I argued, or at least I clearly implied, that the odd design of the chimney flues raised the danger of HCN reaching the crematorium ovens and furnace room directly from the waste incinerator.

Another feature of Mattogno’s critique is that he assumes an overly simplistic model for the transmission and application of scientific developments. For example, he argues on the one hand that a concern for HCN as a combustion product could not have been novel in 1943 if scientific investigations established the danger in papers published a decade earlier. He also argues that an effect involving burning rayon with impregnated flame retardants could not have been known by the Germans in 1943 because the first scientific paper on the effect in question was published in 1978.

In fact it can, on the one hand, take years for a fact established in a laboratory to be taken into account by practicing engineers, especially when the design and manufacture of special devices are required.

On the other hand, certain facts may be available to the practicing engineers long before a formal paper is published laying them out. Scientific publication is closely related to Ph.D. dissertations, and I can testify that I have examined many such dissertations which were worthy in relation to what had already been formally published, but which I knew must have been surpassed by work not published for reasons of either national security (“classified” work with military or intelligence applications), or commercial proprietorship, or just preoccupation with practice over publication.

In fact it can be very difficult to discern, from the outside, what engineers practicing in a given area, at a given time, knew or believed. Even the initial recognition of HCN as a combustion product is somewhat cloudy, as the earliest source that Y. Tsuchiya cites is an anonymous report in a 1929 engineering journal. Even he does not know to whom the initial apprehension should be credited, and there is no proof that somebody didn’t know it before 1929. Y. Tsuchiya, incidentally, lists no prewar German sources, but there must have been some.

I think 1943 was about the right time for practicing German engineers to have been concerned with, but not quite sure what to do about, HCN as a combustion product. My theory depends on this idea that the authors of the correspondence were not sure what they should do, but I have not postulated the uncertainty to shore up my theory. It is in the document in question, even the part of the document that Mattogno would retain.

All I am suggesting is that the reason the Central Construction Office turned to a furnace maker for HCN detectors was that what was involved was a concern for HCN as a combustion product, not a pesticide. I am bewildered that such a simple interpretation of the document in question should meet such resistance.