This is excerpted from a post David made on his own Blog: http://www.countercontempt.com/archives/5112 . The title of his post is: “Hollywood Gops Ankle Holocaust Jew at Boffo Samarra Fest.” I don’t have room here to post the entire text, nor to translate the title into simple English, so will go with what I have done here. There will be more.

With my new book, still four months away from release, already NUMBER SEVEN (!) on the Amazon list of “Hot New Releases” in the political advocacy category (and likely to climb steadily in the months to come), and with my book being carried by Wal-Mart, Barnes & Noble, and Waterstones (the largest bookstore chain in the UK), I’ve been receiving a few emails from some of my former conservative chums in which they wonder if maybe, just may-be, they were manipulated into bringing about the thing they feared the most.

It’s a legitimate question. The fact is, mine might very well be the first unashamedly Holocaust revisionist book to be carried by so many mainstream outlets. And the book came about specifically because my Hollywood Republican pallies were manipulated into shunning me and destroying the life I had built over the past eighteen years. I did not want to leave that life. However, I was not only forced out, but every avenue of income I had was cut off, to the extent that people like talk show host Larry Elder and his publishing company World Net Daily re-fused to compensate me for work already done. 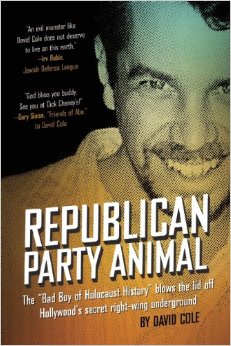 All in the name of punishing Holocaust revisionism.

So, if the result is the most mainstream exposure that revisionism has received in decades, are we talking a “Samarra moment” for my former comrades? Factoring in that the book is half about the Holocaust, and half about exposing the secret underground of Hollywood conservatives that I was a part of, my book can be seen as the result of a terrible, terrible miscalculation on the part of people whose fanaticism regarding what can or can’t be said about Holocaust history al-lowed them to be manipulated by the conniving pair who outed me.

When I knew I was going to be outed, I begged the folks who were about to do it to think carefully before proceeding. I tried to rationally explain to them that if they put me back in the spotlight because of my historical views, I’d have no choice but to defend myself by explaining my views. I didn’t want to be outed. But if I was, I wasn’t about to run or cower or recant. I recanted once in 1998, to save my hide. But I’m too old, too drunk, and too unafraid of “the gathering darkness” (to use a Grandpa Simpson phrase) to care anymore.