Revisionism: The Most Dangerous Topic

Already in the fall of 1998, when the historian Dr. Dariusz Ratajczak was still teaching at the University of Oppeln (Opole), he published a book with the Title Dangerous Topics. One of the chapters covered dealt with Holocaust Revisionism. For this chapter, Ratajczak was indicted[1] and fortunately eventually acquitted,[2] but this did not hinder his Alma Mater from dismissing him.[3]

Those who feared that Dr. Ratajczak was intimidated by this persecution can breathe freely: following his first book, Dr. Ratajczak has written a second one, which deals exclusively with Holocaust Revisionism, the most dangerous of all topics covered by Ratajczak in his first book. 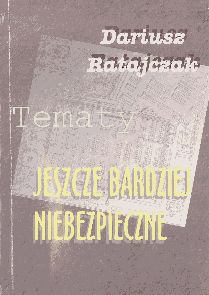 Ratajczak was born in 1962, is married and has children. He stems from a patriotic Polish family. At the University of Oppeln he had a reputation of being a very popular professor and for his fun-loving humor. He used to be highly respected and frequently cited as a scholar, writer, author, and journalist. He was also known for not making any compromises with the truth. But when Dr. Ratajczak decided to delicately question the myth of all myths, he lost his teaching job and had to face numerous legal assaults. This defender of freedom has been the subject of an incomprehensible hate campaign, initiated by leading Polish publications. These papers, for the most part, are owned by non-ethnic passport Poles, many of them foreigners.

As a result of these attacks, Prof. Ratajczak was forced to live as a near-downtrodden pauper, since he has been unemployable. At present he is able to feed his children because he makes minimal wages as a security guard. It makes one wonder about transcontinental alliances and the element that tyrannizes freedom of debate.

At any rate, Prof. Ratajczak is an individual of immense integrity. He ascribes to the responsibility of moral codes and has not succumbed to semantic accusations of those with a history of corralling majorities via blackmail and political terror. With his new book, Ratajczak has done exactly what those anti-free-speech terrorists wanted to prevent: Now he has put all of his fingers in the festering wound of all western societies, on the most dangerous topic of all, the Holocaust. By so doing, he aligned himself into the worldwide front of pacemakers in this confrontation about freedom of speech, as Dr. Robert Countess used to say.

The title of his book Tematy Jeszcze Bardziej Niebezpieczne (A Subject Even More Dangerous) indicates that this book came into existence only because the author had to learn the hard way that Holocaust revisionism is indeed the most dangerous topic of all. All other allegedly dangerous topics covered in his first book did not cause any attention, thus were not really dangerous. If Ratajczak wouldn't have been persecuted for his frist book, he would probably never have written the second. Hence, the Holocaust lobby's attack on him backfired.

In a Central European world controlled by the brethren of former communists, Ratajczak could not retain his job in a manner similar to the noble Prof. Arthur Butz. He could not continue to publish articles like Joe Sobran and Pat Buchanan. In the spirit of a Jürgen Graf, Ratajczak gives us another glowing example of the spirit of freedom against overwhelming odds. Let's take our hats off to him.

In his new book, Ratajczak glorifies numerous individuals who have fought against mental totalitarianisms. His language makes it obvious that he dislikes those impeding freedom of speech. This does not imply that he agrees with all the views of those he declares his solidarity with. Among the people mentioned in his book are John C. Ball (Canadian), Jürgen Graf (Swiss), Prof. Robert Faurisson (Frenchman), Dr. Fredrick Töben (Australian), Germar Rudolf (German), David Irving (Englishman) and Carlo Mattogno (an Italian). He also refers to Americans Mark Weber and Harry Elmer Barnes.

Ratajczak explains that many scholars do not believe in much of what is articulated about the so called Holocaust industry, but that they consider 'gas chamber' stories to be fables. Among those who have pronounced such are: Thies Christophersen, Mark Weber, David Cole (a Jew) and Miloslav Dragon.

On page 29, a chapter entitled "Falszywi Swiadkowie" starts (False Witnesses), which speaks for itself. On page 35, Darek Ratajczak refers to the famous air photo analyses by Canadian John Ball,[4] Report and by the time the reader reaches p. 42, he has learned quite some revisionist arguments about Treblinka.

On page 44 Ratajczak speaks about Jan Kozielewski (Jan Karski) and his dishonesty. The title of a chapter starting on page 48 is "Six Million," in which Ratajczak explains revisionist arguments on Jewish population statistics. He also mentions that the first time that six million Jews were allegedly killed in Europe was as early as 1919.[5] Starting on page 51, he finally reports about the views of Robert Faurisson under the title: "Rewizjonizm Holocaustu Wedlug Roberta Faurissona" (Revisionism According to R. Faurisson).

On page 69, a chapter starts with the title "Jak Adolf Israel Budowal" (How Adolf built Israel). On page 87, the reader is confronted with a chapter that reads "Amerykanska Piata Kolumna" (America's 5th Column). After that, Ratajczak turns to the Jewish religion by exposing Jewish-talmudic views about Christianity. Near the end of the book, he also elaborates on the conflict in Palestine, and he also refers to the disproportionally high participation of Jews during the Russian Revolution with all its mass murder and genocides.

Dariusz Ratajczak is living proof of Michael Hoffman's prophesy that knowledge and anger about censorship and the ongoing Holocaust propaganda is spreading and is getting finally discharged into revisionism. I recommend Ratajczak's book to the 20 million Poles in exile. Not only is Prof. Darek Ratajczak carrying the shield of defence for European values like freedom and civil rights. And even if Dariusz Ratajczak is now a pauper, he has made many people mentally and culturally richer by giving them the opportunity to get decisive insights about our world. He might be a political slave, but he is also a liberator. He may be slandered by the Poland's New York Time , the Gazeta Wyborcza, but he is a giant of a man.

Prof. Ratajczak has been unmercifully beaten down economically by the media. Anyone wishing to cheer him up would be fighting for freedom of speech and morality. The author's address is: ul. Tatrzanska 48/3, Opole 45-217, Poland. [Prof. Ratajczak died on 11 June 2010]