Perhaps France fell first, in 1991, with its loi Gayssot. Then (or slightly before) fell Switzerland, Germany, Austria, Belgium, not necessarily in that order. All these countries, and of course Israel, have capitulated to historical revisionism in the most abjectly desperate manner imaginable: they now officially, with laws, threaten people who express certain views of recent history with fines and imprisonment for so doing. Specifically, these countries, and other countries by various devices, punish “Holocaust Denial” with the mechanisms originally emplaced for dealing with rapists, murderers, thieves, and other such perpetrators of death and destruction.

They’ve all given up. They’ve given up on social disapprobation, they’ve given up on the wisdom of crowds, and they’ve given up on all pretense, otherwise dear to their regimes, of freedom of expression. They’ve fallen back on the scoundrel’s last recourse: legal prohibition—the very same device with which once the United States sought to contain Demon Alcohol, and with which it, and other countries, continue to assault what might be styled “freedom to ingest.”

Of course, it fails. It fails frequently and widely, and ironically, it exacerbates its own failure in inciting, and even rewarding, those who contrive by various means—nowadays often the Internet—to circumvent and overcome its ostensibly intended effects. And, with regularity, it claims victims—examples for The Rest to behold—in the form of transgressors who are investigated, raided, accused, stripped of honors and degrees and livelihoods and even citizenships, and fined, and jailed, and publicly excoriated. In doing this, it creates not only opponents with massively reinforced wills to resist, but public martyrs as well—prisoners of conscience whose antecedent is none less than Jesus Christ himself, and the long trains of succeeding martyrs in both Christianity and in other religions and causes, who form the panoply with which ultimately the rectitude of their causes can be more brilliantly illuminated for the inspiration of new recruits.

Drug dealers thrown into prison could avail themselves of an idealistic basis for refuting the legitimacy of their incarceration by asserting their support for the right of people to acquire the substances of their choice for introduction into their own bodies, but drug dealers seem not to do this. One reason for this might be the enormous profits that successful dealers enjoy from plying their trade, though in honest contemplation, this factor does not in the slightest diminish the point. Those espousing a disapproved understanding of history, on the other hand, serve a small and rather parsimonious “market” of truth-seekers who, in the event, fail notably to enrich their purveyors. While, like drug dealers, revisionists may be marginalized and dispossessed by any of many means, they never attain anything resembling the wealth and opulent lifestyles often seen among the purveyors of chemical freedoms.

And one other critical difference: although often themselves the victims of violence, the purveyors of intellectual freedom as regards history never themselves employ violence—not even, in many recorded cases, the sorts of defensive violence that could protect their persons and their (meager) properties from assault by their violent detractors. In this, all revisionists of record resemble not only the Christian Son of God, but Gandhi, The Buddha, and many others whose influence ultimately has pervaded both consciences and institutions to an extent that should give pause to those who undertake to oppose them. 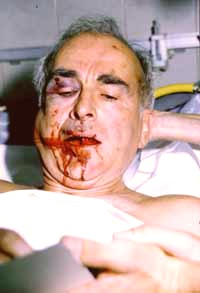 Professor Robert Faurisson in a hospital bed following a near fatal attack by Zionist thugs on 16 September 1989.

Those who oppose them, particularly in the ambit of this Holocaust matter, may have managed, indeed, to disguise themselves in the various cloaks under which the casual observer might infer, however indistinctly, the forces of righteousness, or of opposition to racism, or discrimination, or some other of the principles of civilization to which the virtuously inclined might fancy themselves to be devoted.

This distinction—between those moved, on the one hand, by the implications of tangible evidence and, on the other, by the interested confabulations of those who say they were there at that time—should be made by those who wish to know what might have been done to whom, by whom, when, where, how, and even, in the best of worlds, exactly why.

But, in numerous regulated regions, this is not to be. Superior forces—forces superior to the common man (or woman)—will stipulate what may be uttered to the public ear, and what may not. The rationales for such control of thoughts are numerous. They encompass suppressing the re-emergence of a doctrine advanced by a political party under which Germany disastrously lost a genocidal war, spreading “false history,” “offending” various groups apparent within the polity, inciting intergroup disaffection, and on and on in such manner.

They are all—as such measures always are—driven by an ulterior agenda. The agenda in this case encompasses not only the desire of a cohesive group to eternally wrap itself in the mantle of victimhood, but far more urgently, to enshroud in the same mantle the depredations that Israel has long visited on the natives of Palestine, the taxpayers of Germany and the United States, and, with the attainment of the capability to launch missiles with nuclear warheads from long-range submarines, the entirety of humanity that lives within 500 miles of any ocean.

True history has its opponents, everywhere and always. It may, here and there, and now and then, also have its would-be adherents. These two communities, such as they may respectively be empowered, and motivated, and suppressed, and successful, eke out between their contentions, what is “known” and understood by those many whose interests place them between the poles represented by the opposing camps.

The interposition of law in favor of one side in this contest announces defeat on the part of the group so favored.

And inevitable defeat as well.