Support for historical revisionism has traditionally been strong in northern Europe. Orders for books and tapes arrive regularly at the IHR from Sweden, Denmark, Norway and Finland – countries where most educated people understand English.

And unlike citizens of France, Germany and a few other countries, Scandinavians still enjoy the freedom to express skeptical views on controversial issues of 20th-century history. According to a survey conducted by Stockholm University and the Crime Prevention Council, and made public last year, nearly a third of Swedish secondary school students have doubts about the official Holocaust extermination story. 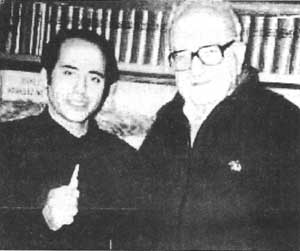 Certainly some of the credit for this is due to the work of Ahmed Rami, a Moroccan-born political exile who lives and works in Stockholm. For more than ten years now, he has been upsetting the complacent with his pro-revisionist and Islamist "Radio Islam" broadcasts, his Internet web site (www... [now at www.radioislam.org]), in leaflets, and in several books. In addition, Rami makes frequent visits to Arab and Muslim countries, where he and his views are widely respected. Much to the distress of Jewish-Zionist forces, Sweden's highest-level public prosecutor decided last September to drop all charges of inciting hatred against Rami's "Radio Islam" Internet Web site.

Also based in Sweden is the "Mimer" association, which has emerged in recent years as an important northern European revisionist center. It defends Swedish and European culture against "one worldism," dissects historical distortion, and counters Zionist propaganda. (In Nordic mythology, Mimer is the giant who guards the spring of wisdom at the root of the great ash tree, Ygdrasil, whose roots and branches bind together heaven, earth and hell.)

From time to time Mimer puts out an attractive newsletter-magazine. now in its eighth year of publication. A typical issue of Mimer is 20-24 pages in length, often with one or two articles in English.

An article on the Jewish role in the black slave trade, along with an essay (in English) on Savitri Devi, the "Priestess of Hitlerism," appear in issue No. 24 (Nov. 1997).

An essay on the 1938 "Crystal Night" anti-Jewish outburst of violence in Germany appears in Mimer issue No. 25 (Dec. 1997). This piece is based on the book Flashpoint by German author Ingrid Weckert (published by the IHR). In this same issue is a good summary article, in question and answer format, on the origins of the Second World War, as well as a close look at the pivotal role of Danzig in the outbreak of war in 1939, and several articles on Nordic heritage and culture.

Mimer also gets out the word through its own Internet web site (www.mimer.org), and a book distribution service. Its catalog lists more than a hundred books and booklets dealing with history, current affairs and political philosophy, including several titles published by the IHR and Noontide Press.