Using his 40-foot-long semi-truck, revisionist activist Rolf Hermes alerted people in Austin, Texas, of the exact times when the David Cole's Piper video would be broadcast there on local public access cable television. No one could fail to see the announcements boldly lettered on the truck's sides.

For up to two hours daily (March 29 through April 2), Rolf drove his truck around the campus of the University of Texas at Austin, and in the center of the city. While it was parked, he and his daughter and a friend passed out hundreds of leaflets.

The student newspaper declined to publish an announcement about the broadcast of the Cole/Piper video. (For more on this, see the March/April Journal, pp. 17-20.) However, a notice headlined "Auschwitz: A New Look At An Old Story," giving broadcast times did appear March 28 in the Austin city daily American-Statesman. 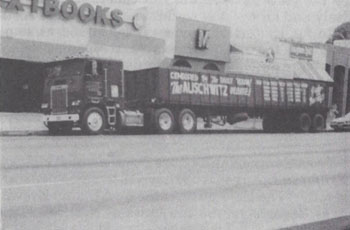 "CENSORED BY THE DAILY TEXAN! THE AUSCHWITZ DEBATE! SEE IT ON CABLE 'PUBLIC ACCESS' TELEVISION. JUDGE FOR YOURSELF!" With this bold message painted on his 40-foot-long truck, IHR supporter Rolf Hermes informs people in Austin of the exact times when Cole's video is aired on local cable television. For up to two hours daily, Rolf drove his truck around the campus of the University of Texas, and in the center of the city. While it was parked (here in front of the "Texas Textbooks" bookstore), he and his daughter and a friend passed out leaflets.

IHR supporters in South Casolina and Texas arranged for publication in their local papers of a full-page advertisement on "The 'Human Soap' Holocaust Myth." Prepared in cooperation with the IHR by the Committee for Open Debate on the Holocaust, the ad includes a condensed version of a fully-referenced article that originally appeared in the Summer 1991 Journal.

The advertisement appeared as a public service in the June 24J. 1992, issue of The North Charleston News, a South Carolina weekly. And in eastern Texas, IHR supporter Bill McKinney arranged for its publication (with the headline in red) in the local Treasure Chest Shopper's Guide.

(A facsimile of the ad appears in the May 1992 IHR Newsletter. Readers interested in arranging for publication of it in their local daily, weekly, community or association paper, should contact the IHR for details.)

Journal editor Mark Weber addressed a seniors' honors class at Mission Viejo High School (Orange County, Calif.) on March 23. He was invited to speak to the packed classroom of about 80 students (and three teachers) on the subject of how history is written and interpreted, and on Holocaust Revisionism. Several students were writing papers for the class on this subject.

Giving numerous examples, Weber explained that in America today, as throughout the ages, the generally accepted view of history reflects the interests and ideals of the prevailing social-economic and political forces. During most of the presentation, which lasted about an hour and a half, he spoke about the Holocaust story. During the lively question and answer period, he responded to often skeptical but consistently thoughtful questions.

Appreciation for his appearance was expressed by several of the students, and by the teacher. This was Weber's second appearance as a guest speaker there. He addressed a similar class at the high school in February 1992.

A record 380,000 copies of a special anti-Holocaust edition of The Truth at Last, a feisty Georgia tabloid, have been distributed. In December, individuals and groups around the country joined in a campaign to distribute copies of the special four-page issue (No. 360), which is designed for mass distribution. The press run for this issue is by far the largest ever, says editor-publisher Dr. Ed Fields. This special issue continues to sell well, he reports. 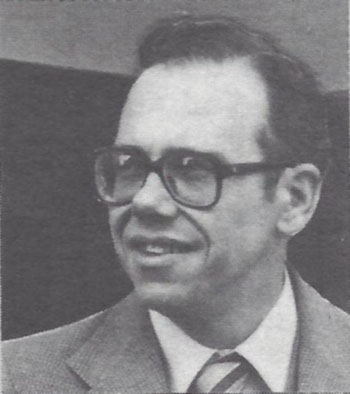 When Fred Leuchter testified in 1988 on the results of his history-making on-site examination of the supposed extermination "gas chambers" at Auschwitz, he knew what the stakes were. He knew that the powerful Holocaust lobby would try to punish him for his heresy. Nevertheless, he chose to stand by his findings. In a dramatic court case, America's foremost expert on execution gas chamber technology declared under oath that these facilities were never used to kill people as alleged, and could not possibly have functioned as claimed.

The path-breaking Leuchter Report, which details his forensic examination, has struck a mighty blow against the core of the Holocaust extermination story, and the campaign to impose an artificial sense of guilt on ourselves and generations to come. Now widely available in all major languages, the Report's key findings have since been authoritatively corroborated by the Institute of Forensic Research in Krakow (Poland), by leading Austrian engineer Walter Lüftl, and by German engineer Germar Rudolf, among others.

It wasn't long before the international Holocaust lobby, spearheaded by the notorious Beate and Serge Klarsfeld, mounted a vicious campaign to blacken Leuchter's reputation, and destroy his career. The most insidious effort has been a behind-the-scenes campaign to destroy his livelihood by pressuring state governments to stop employing him as their execution hardware engineer. (For more on this, see the Winter 1992-93 Journal.) Unfortunately, this campaign has been successful.

Fred must now support himself and his wife as a telephone solicitor.

No American has suffered more at the hands of the vengeful Holocaust lobby than Fred Leuchter. In spite of every thing, though, he remains defiant:

I have been vilified by the caretakers of the Holocaust dogma whose desperate tactics prove the failure of their arguments. My livelihood has been destroyed, my character has been impugned and my life turned upside down. But I will not bend the knee: Not now, not tomorrow, not ever. Time and reason will vindicate the Leuchter Report.

Now, after risking, enduring and achieving so much, Fred Leuchter needs our help: to carry on the legal fight against the Klarsfelds and their allies, to continue the work for revisionism, to support himself and his family.

By your generous support, show Fred that we revisionists refuse to forget his accomplishments and sacrifices, that we stand by our friends, and that we will not concede victory to the Holocaust lobby.

Please send your personal contribution to:

IHR editor Weber appeared last August and September as a guest on three radio talk shows, including stations in New Orleans, southern Michigan, and with host Tom Valentine on "Radio Free America," which is heard across the United States.

Mark Weber appeared as the featured speaker at the April 6 session of the Nock Forum, a Los Angeles-area libertarian group, where he spoke about the Holocaust and the Nuremberg Trials.

David Cole appeared March 29 as a guest on the Morton Downey radio talk show, which is based in Dallas, Texas, but airs across the county on syndication. During the hour-long, one-on-one broadcast session, Downey was uncharacteristically respectful and non-combative.

That same day, the young Jewish Holocaust revisionist (who addressed the October 1992 IHR Conference) was also guest on "About Town," a Dallas-area half-hour local television program. The host, Jo Shannon Baldwin, was respectful.

On January 20, Indiana activist Jack Riner passed out 1,200 IHR leaflets to students in front of the student union building at Indiana State University, Terre Haute. Although he has had trouble on one or two occasions in previous years, Riner reports, "this time a campus cop told me I can pass out any kind of literature I wish." A few weeks earlier, he passed out another 1,200 IHR leaflets on the campus of Bowling Green State University in Ohio. 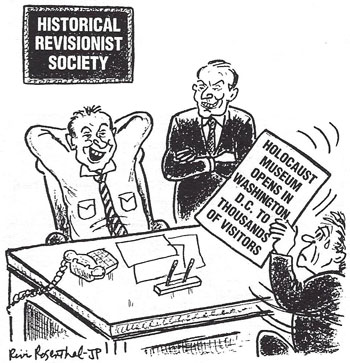 "Don't worry – within time, people will forget all about the so-called 'Holocaust'!"

This childish cartoon appeared in the May 7 "Jewish Press" of Brooklyn, New York. The "Press" calls itself "the largest independent Anglo-Jewish weekly newspaper." In recent months Holocaust Revisionism has received more media attention than ever, much of it on this level.

Just three days before it was scheduled to take place, a lecture by Journal editor Mark Weber at Utah State University (Logan) was cancelled by the group that had invited him. The school's International Student Council had accepted a proposal, made by a graduate economics student from India, to invite Weber to address a "Scholar's Forum" on Thursday, February 18.

At an emergency meeting on the 15th, members of the school's history department made outrageously false and alarmist claims that helped persuade the Council to cancel the scheduled event. History professor Leonard Rosenband told the Council that IHR director Tom Marcellus was the person who had ordered the well-publicized skinhead killing in Portland, Oregon, of an Ethiopian immigrant. When the India-born graduate student pointed out that Rosenband was in fact talking about Tom Metzger, another person entirely, Rosenband shot back that the two are the same.

One Council member was so disgusted by the unfair decision to cancel Weber's lecture that he resigned from the body.

An essentially accurate and even-handed report on the Council meeting appeared in the Utah Statesman, Feb. 17, along with an editorial that concluded:

Why not let Weber come and speak in a debate forum with professors or other experts who disagree with Weber's views? This would surely be preferable to discrediting Weber and his group in a private meeting without letting him speak in his own defense.

"The man who fights for his ideals is the man who is alive."—Miguel de Cervantes