Challenging facts of Holocaust is responsibility of historians 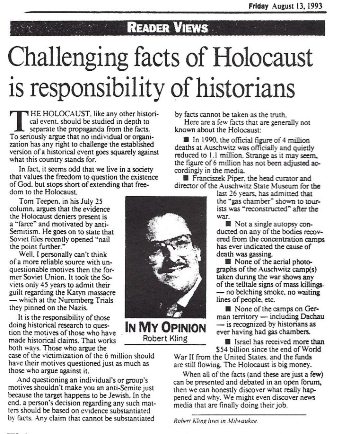 THE HOLOCAUST, like any other historical event, should be studied in depth to separate the propaganda from the facts. To seriously argue that no individual or organization has any right to challenge the established version of a historical event goes squarely against what this country stands for.

In fact. it seems odd that we live in a society that values the freedom to question the existence of God, but stops short of extending that freedom to the Holocaust.

Tom Teepen, in his July 25 column, argues that the evidence the Holocaust deniers present is a "farce" and motivated by anti-Semitism. He goes on to state that Soviet files recently opened "nail the point further."

Well, I personally can't think of a more reliable source with unquestionable motives then the former Soviet Union. It took the Soviets only 45 years to admit their guilt regarding the Katyn massacre – which at the Nuremberg Trials they pinned on the Nazis.

It is the responsibility of those doing historical research to question the motives of those who made historical claims. That works both ways. Those who argue the case of the victimization of the 6 million should have their motives questioned just as much as those who argue against it.

Here are a few facts that are generally not known about the Holocaust:

When all of the facts (and these are just a few) can be presented and debated in an open forum, then we can honestly discover what really happened and why. We might even discover news media that are finally doing their job.

This guest commentary by Journal subscriber Robert Kling appeared in the Milwaukee Journal, August 13. A good example of individual initiative by a young revisionist, it set off a flurry of letters and commentary in the pages of the influential Wisconsin daily. The somewhat misleading headline was added by the newspaper.

"Symbol of Our Culture"

"Whether presented authentically or inauthentically, with empathy and understanding or as monumental kitsch, the Holocaust has become a ruling symbol of our culture. Hardly a month passes without a new TV production, a new film, a number of new books of prose or poetry dealing with the subject."
—Israeli Holocaust historian Yehuda Bauer (professor at Hebrew University, Jerusalem). Quoted in The Canadian Jewish News (Toronto), Jan. 30, 1992, p. 8.