The emergence and rapid growth of the "information superhighway" computer network as a vast global communications forum is dramatically transforming the nature of the international struggle for truth in history and for our basic freedoms. Contributing greatly to the phenomenal growth of the already huge "cyberspace" computer link-up is the Internet, a worldwide network of networks that enables computers of all kinds to communicate directly with each other.

For several years now, individual revisionists – often posting materials published by the Institute for Historical Review – have been reaching hundreds of thousands, if not millions, through such global "on line" computer information providers as America Online, Delphi, GEnie, Prodigy, and Compuserve. During much of 1992, for example, a heated debate on the Holocaust issue raged on public discussion forums on the GEnie and Prodigy systems. Hundreds of messages were being posted daily until, bowing to pressure, the companies shut down the freewheeling discussion forums.

In addition, for some time now a heated debate on the Holocaust issue has raged on Internet newsgroups, especially alt. revisionism.

Recently an important new breakthrough was achieved on the Internet that enables information from the Institute for Historical Review to reach an enormous, worldwide audience.

IHR materials can be reached 24 hours a day from any of the 146 countries served by Internet through the World Wide Web (WWW), a new multimedia Internet "on-ramp."

Through his personal Internet "Web page," Greg Raven, associate editor of this Journal, has been making an impressive selection of Journal articles and reviews and IHR leaflets instantly available to millions around the world, free of censorship by governments or powerful special interest groups.

This Web page includes a listing of every article that has ever appeared in this Journal, allowing callers to quickly search for titles and authors. New items are being added as time permits.

More than 25 million computers are already connected to the Internet, a figure that has been growing phenomenally in recent months, in large part due to the WWW's ease of use.

Internet users, the great majority of whom are in North America and Western Europe, tend to be exceptionally bright and inquisitive.

The multimedia nature of the World Wide Web means that IHR materials on Raven's Web page are instantly available in an attractive and very readable layout. Internet users around the world can also save IHR material from this Web page on their personal computers for later study, or for reprinting and distribution.

Getting IHR on the Internet has so far been entirely Raven's private spare time project. Because of the tremendous interest already generated by his modest offering of IHR materials, the Institute is seeking funds to make this a priority project.

Revisionist postings on alt. revisionism and other electronic public discussion forums, or on the World Wide Web, certainly don't dominate "cyberspace," of course. They are dwarfed by the quantity of antirevisionist material posted by individuals or provided by such outlets as the US Holocaust Memorial Museum, the Simon Wiesenthal Center, Israel's Jerusalem One computer, and the Israel government Yad Vashem Holocaust center. At least two Internet services have been organized specifically to counter Holocaust revisionism, including an "academic" Internet "mailing list" by the University of Chicago History Department for persons "who seek to challenge the claims of revisionists."

As the article points out, "the larger issue of Holocaust revisionism has been thrashed out for much longer on the widely available [Internet] newsgroup alt. revisionism." Now, though, because "Holocaust denial seems to be spreading on the Internet," a new Web page "dedicated to monitoring and combatting Holocaust denial" has recently been set up.

Bigoted special interest groups naturally regard such an unfettered exchange of information and views with fear and apprehension. Major Zionist groups, notably the Simon Wiesenthfil Center and the Anti-Defamation League (ADL), understand the threat to their entrenched interests posed by this vast forum for uncensored exchange of information and ideas.

These enemies of free speech accordingly have been doing everything they can to control this global computer network, and thwart the robust growth of Holocaust revisionism on it.

As early as 1992 the ADL openly boasted in its Frontline newsletter (Jan. 1992) that it was pressuring the Prodigy computer system to nip in the bud any skeptical treatment of the Holocaust issue on its electronic discussion forums. And in September 1992 the GEnie system shut down its new "Auschwitz" discussion forum after just five days, in response to numerous skeptical postings by revisionists.

A report on the Twelfth IHR Conference in the Fall-Winter 1994-95 issue of the Simon Wiesenthal Center's glossy magazine, Response, focused on the Institute's increasing ability to get out its message through the Internet. 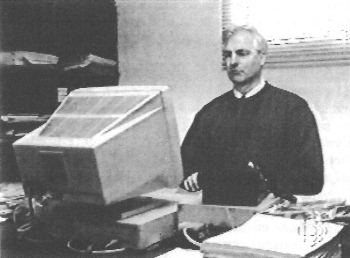 Greg Raven at an IHR office computer, as seen on a recent Canadian "CBC Primetime Magazine" television report about Holocaust revisionism on the Internet.

Similarly, articles in the Spring 1995 Response singled out the Institute, expressing particular anxiety over the IHR's impact through the Internet.

Wiesenthal Center Associate Dean Rabbi Abraham Cooper, writing in the Los Angeles Times, April 16, expressed alarm about the growing Internet influence of the Institute for Historical Review ("the leading voice of Holocaust denial in the United States") and other "hate groups." Cooper cited the IHR's new Internet Web site, and concluded his lengthy essay with a vague call for action to ban the IHR and other inconvenient voices from the Internet.

Recently the Wiesenthal Center set up a "CyberWatch Hotline," asking users to "to report any incidents of antisemitism, racism or other forms of bigotry that you have experienced."

Journal associate editor Greg Raven promptly responded: "I have been receiving hate messages over the Internet almost every week for the last few months, nearly all of them from anonymous and untraceable sources. Many of the messages threaten my life, and all of them refer to me using intolerant, bigoted terms."

So far the Wiesenthal Center has not responded to Raven's report.

A four-page letter from the Wiesenthal Center sent out to its vast mailing list in March 1995 warned that "Holocaust deniers with their insidious tracts, ranging from the 'scholarly' to the outlandish," along with other "bigots," are making "alarmingly effective" use of the Internet.

"In response to this alarming, almost exponential, rise of computer hate," the letter continued, "the Wiesenthal Center is conducting an extensive global investigation to determine... the steps that can be taken to stop these dangerous haters at home and abroad... We will work together with legislative and judicial bodies here and around the world in order develop strategies to combat high-tech bigots."

Translation: The Center is doing everything in its power to ban dissident views on the Holocaust issue from the worldwide computer linkup.

Ominously, both the Wiesenthal Center and the Canadian government's "Human Rights Commission" candidly admit that their goal is to totally shut off all access to revisionist facts and arguments.

Because of its worldwide scope and the absence of any central control, the Internet is difficult to police, even in countries where Holocaust revisionism is prohibited by law. As a result, would-be censors have so far been unable to seriously hamper the Institute's Internet outreach.

As the worldwide computer network plays an ever more significant role in international communications, and as the struggle over basic social values represented by the Holocaust debate intensifies, Jewish-Zionist groups will doubtless step up their efforts to silence the Institute for Historical Review and similar dissident voices.

Cyberspace will almost certainly become an even more critically important battleground in the global struggle for historical truth and freedom of thought and expression.