Revisionist Historians and Activists to Meet for Twelfth IHR Conference

From across the United States and several foreign countries, scholars, activists and friends of the Institute for Historical Review will meet over the September 3-5 weekend in southern California for the IHR's Twelfth International Revisionist Conference.

As announced in the May-June Journal, this forthcoming Conference will feature some of the most prominent figures in the growing international revisionist movement. A lot has happened since the Eleventh IHR Conference in October 1990, and leading activists will be on hand to provide attendees with the exciting inside story about the major breakthroughs, as well as the formidable new efforts of our enemies, in the international campaign for greater historical awareness about the most hyped and taboo-laden chapter of history. In addition, leading revisionist scholars will report on the new documentary and investigatory discoveries that further shatter the icons of "official" history.

In his typically riveting and entertaining style, best-selling British historian David Irving will present startling new facts and insights about Joseph Goebbels, based in part on his headline-making investigation in Russian archives of the Third Reich propaganda chief's long-hidden personal diaries. Irving, one of the world's most prolific historians, will also update attendees on the ever more frantic international campaign to muzzle him and all others who dare to defy the powerful worldwide Holocaust lobby.

From Canada, German-born publicist and civil rights activist Ernst Zündel will report on his courageous international campaign for greater awareness of suppressed history, and to restore the honor and good reputation of the German people. He'll talk about his publishing work and media activism, including the inside story on his March appearance on the popular "60 Minutes" public affairs television show, and his newly organized international television and radio broadcast outreach campaign. Zündel will review the impact and significance of his two widely publicized "Holocaust trials" (1985 and 1988), which brought major breakthroughs for historical revisionism and an important victory for free speech in Canada. 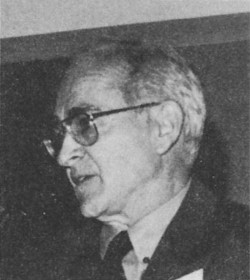 Robert Faurisson, Europe's leading Holocaust revisionist scholar and a much-appreciated IHR Conference speaker, will return to delight attendees with another fascinating and witty presentation. He will speak about the significance of revealing documents about Auschwitz and other German camps unearthed after years of suppression from Russian archives.

It was this French university professor (and frequent Journal contributor) who first dug up and published key documents from the Auschwitz construction department archives. After attempting for years to ignore this evidence, Faurisson's hard-pressed enemies are now obliged to offer confused responses. He will also report on the very oppressive situation in his native France, where it is a crime publicly to challenge the currently fashionable view of the Holocaust extermination story. 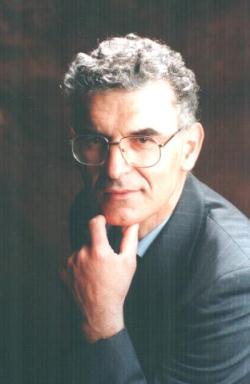 Carlo Mattogno, Italy's foremost revisionist scholar, will speak about his recent eye-opening research into the Holocaust story, emphasizing what newly uncovered records show about fraudulent Auschwitz extermination claims. A meticulous researcher with an impressive command of languages, Mattogno is the author of several books in Italian, and of numerous scholarly essays in English that have appeared over the years in this Journal including the text of his presentation the Ninth IHR Conference (1989). Copies of Auschwitz: The End of a Legend: A Critique of J.-C. Pressac, an impressive and detailed study just published by the IHR, will be available for sale. The author will gladly autograph copies. 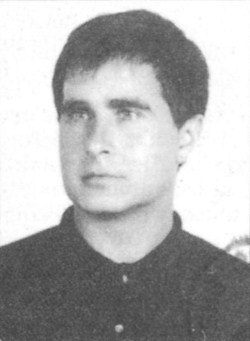 In March 1993, following the publication of his 112-page book Der Holocaust auf dem Prufstand (''The Holocaust on the Test Stand"), Graf was summarily dismissed from his post as a secondary school teacher of Latin and French, in spite of support from his students and colleagues. His firing came on orders of high-level Swiss authorities. Graf is also author of Der Holocaust-Schwindel (in German), L'Holocaust au Scanner (in French), and, most recently, Auschwitz: Tatergeständnisse und Augenzeugen des Holocaust ("Auschwitz: Admissions by perpetrators and eyewitnesses of the Holocaust"). For more about Graf, see the Sept.-Oct. 1993 Journal, pp. 36-37.

John Ball will speak about his research and evaluation of little-known wartime aerial photography, providing devastating new insights into the suppressed history of Auschwitz and other alleged German death camps. Ball, a mineral exploration geologist from western Canada, has gathered, studied, and published scores of long suppressed aerial reconnaissance photographs of German camps. His analysis of these photos sheds new light on what actually did and didn't happen at these camps, providing valuable new data and insights against the Holocaust extermination story. He will illustrate his presentation with slides of wartime aerial photos.

IHR editor Ted O'Keefe will dedicate the Twelfth IHR Conference to the memory of American historian and journalist William Henry Chamberlin. Greg Raven, Associate Editor of the Journal, will serve as this year's Master of Ceremonies. Journal Editor Mark Weber will deliver the keynote address, summing up IHR and revisionism's achievements since the previous conference, and outlining present and future challenges. Institute Director Tom Marcellus will report to attendees on IHR business and organizational development since the Eleventh Conference in 1992.

This year's Mystery Speaker is a highly qualified technician from Europe whose study of the alleged mass-murder "gas chambers" at Auschwitz confirms that these facilities were not and could not have been used to kill people as claimed. His findings corroborate and strengthen the results of earlier investigations, including those of American gas chamber expert Fred Leuchter. 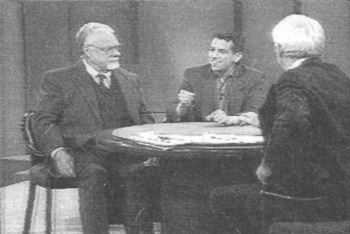 David Cole, the youthful Jewish filmmaker who has proven himself an effective spokesman for the revisionist view in several nationally-broadcast television appearances, and who delighted attendees at the IHR's Eleventh Conference, will preview his promising second video about alleged wartime German killing facilities. In his first blockbuster revisionist video, the curator of the Auschwitz State Museum admitted to Cole on film that the "gas chamber" shown to tourists there is actually a postwar reconstruction.

Bradley Smith, America's most prominent revisionist activist, will report on his successful headline-making campaign, in defiance of malicious smears and ADL censorship, to bring revisionist facts and arguments to students and professors by placing advertisements in student papers across the United States. Smith – who is Director of the Committee for Open Debate on the Holocaust (CODOH), and longtime head of the IHR's Media Project – will also report on his recent national media breakthroughs, including an appearance (with David Cole) in March as a guest on the ''Donahue Show." Dr. Robert Countess, a former college-level instructor in history and an IHR Editorial Advisor, will update attendees on his revisionist activities since the last Conference.

Regrettably, several persons who had been announced as Conference speakers in the May-June Journal will not be able to participate after all. These are: Fred Leuchter, Prof. H. W. Koch, Prof. Tony Martin and Michael Shermer.Two speakers Carlo Mattogno and Jürgen Graf – have not been previously announced.

As those who have attended previous gatherings can attest, an IHR Conference is an informative, inspiring and enjoyable occasion. This Twelfth IHR Conference promises to be one of the most memorable ever.

While audio tapes and videotapes of this forthcoming IHR Conference will be available for sale, as usual, nothing matches the opportunity to see, hear, and meet personally with revisionist scholars and activists from around the world, the courageous individuals who lead the international crusade for truth about the most distorted aspects of twentieth century history.