Roger Garaudy and Abbé Pierre Take a Few “Steps Back”

SR’s October issue is excellent. Unfortunately, as for the good article on Garaudy and Abbé Pierre, some rectifications are necessary.

The two men recanted more or less. The book that Garaudy sells now as a “Samizdat” is different from the first edition which was published by Pierre Guillaume and which caused such a hullabaloo. Although Garaudy still expresses in it his skepticism about the official version of WWII, the names of Butz, Staeglich and Faurisson—mentioned only once in the first edition—have totally disappeared. Other details show that Garaudy tries his best to distance himself from the Revisionists. 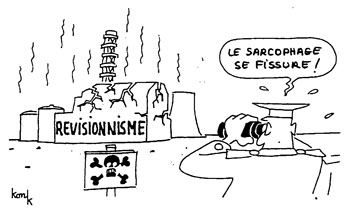 Trying to outbid his enemies, Garaudy says that Hitler was even worse than they claim and that the Fuehrer caused fewer than one million Jewish deaths but many more millions of Communist or Russian deaths; in fact, Hitler was responsible for the 50 million deaths of WWII! Abbé Pierre recanted on July 22 when, in a letter to La Croix (The Cross), he wrote that, his statements having been exploited by some dangerous people—he meant the revisionists—he had decided to take those statements back, and he begged the pardon of everyone—he meant especially the Jews—he might have offended. He repeatedly said that “negativism” or “revisionism” are repulsive.

There is no lawsuit against Abbé Pierre. We still do not know if and when Garaudy will be in the dock. My own next trial will be on November 15 for one sentence in my press release of April 19 on the Garaudy/Abbé Pierre affair, in which I said I was pleased to see such famous people more or less coming to our side; but I added that I expected these people would, as usual, assert that they had not written what they had written; I expected them to “try to outmatch everyone in terms of anti-nazism.”

The very next morning Garaudy and Abbé Pierre began to “step back." As the Latin saying goes: Experto crede Roberto (Believe Robert the expert). When it comes to facing the violence of those who defend the Jewish Holy Trinity of the Shoa (genocide-gas chamber-six million), I have had quite some experience. Unfortunately, I think I am still the only one in France, among many Holocaust Revisionists, to continue to repeat publicly that the entire Jewish Holy Trinity of the Shoa is nothing but a hoax. Not a “historical lie” as I used to say, but a “hoax”, as Arthur Butz put it, 20 years ago, in 1976.

Despite the “steps back" taken by Garaudy and Abbé Pierre which Professor Faurisson reports, it appears that the “revisionist” content of the new “samizdat" version of Garaudy's book remains almost entirely intact.

With regard to Abbé Pierre “recanting” by condemning revisionists, it appears he did not condemn Garaudy or Garaudy’s book, the condition for his readmission to (the Zionist pressure group) LICRA and the various other “anti-racist” and charitable enterprises he'd belonged to.

For my part, my sense of things tells me to continue to applaud Roger Garaudy and Abbé Pierre. Two octogenarians threatened with seeing virtually everything they've spent a lifetime building up—friendships, associations, work, reputations, and yes, public acclaim—risk it all, or very close to it all. Faurisson of course views that field from a perspective somewhat different than the two older men. He has done what they have not quite done. They have stepped back a bit. Those few steps back may be what most distinguishes them from Robert Faurisson.