Safe Among the Germans: Liberated Jews After World War II

Perhaps unintentionally, the title of this fascinating study of the infamous Displaced-Persons camps in postwar Germany is very generous to Germans. It suggests that, in some act of contrition, those Germans who survived World War II willingly opened their land, and figuratively their arms, to Jews from all over Europe who had been displaced by the recent hostilities. As the author makes clear in her text, however, this was hardly the case, if only for the reason that the Germans effectively had no land, surviving from day to day as they did at the pleasure of the occupying powers that had won their war against Germany. But the text further makes clear a good reason for the title, and a fairly obvious one at that: that Jews from all over Europe, at least east of the Rhine, came in the period after the War to find their best respite from displacement and dispossession on the former territory of that very country whose previous (National Socialist) government undeniably bore the bulk of the responsibility for their plight. The irony is irresistible, and carries far greater emotional impact than would any more-accurate title such as Jewish Sojourning under the Allies, or even Occupied Germany: Jewish Way Station.

The presumably innocently misleading title of this work actually provides a fair representation of the sort of “history” embodied in this book. Ruth Gay, an accomplished chronicler of events involving world Jewry in many places and times (she died in 2006), conveys impressions of such events that are informed by visceral identification with her Jewish subjects that nonetheless are refreshingly free of the cant, partisanship, and outright racism that so often degrade narratives composed by members of the groups under discussion. This, of course, hardly makes Gay any sort of revisionist. She recounts most of the standard litany concerning the National Socialist persecution of the Jews in quite as much detail as would seem pertinent as antecedent to her actual subject. This, of course, entails the assignment of great blame to many German persons and institutions, recitation of whose names she spares the reader. Interestingly, while she makes ample reference to direct and indirect killing of Jews by Germans, she at no point asserts the existence or use of gas chambers, except as such views happen to appear in quotations she presents that bear on her own subject. And, at least to attentive readers, she is unsparing in describing the policies and practices of the Soviet Union and other non-German agents in treating Jewish refugees in a manner that, at the end of the day, is very difficult to distinguish from the fates that befell Jews at the hands of Germans. 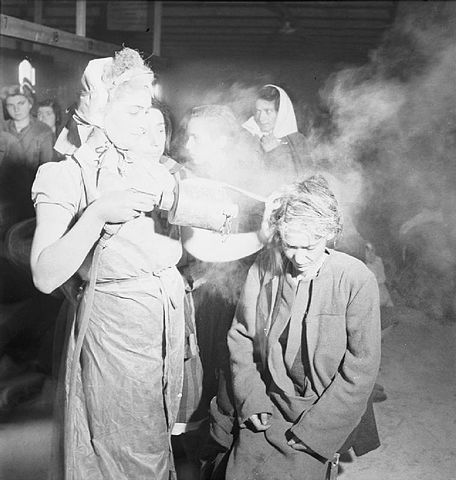 After dressing in clean clothes, a female inmate is dusted with DDT powder to kill lice which spread typhus. The dusting is done by other former camp inmates (many of whom were trained nurses before being interned) under the supervision of the Royal Army Medical Corps.
By Hewitt (Sgt), No 5 Army Film and Photographic Unit [Public domain or Public domain], via Wikimedia Commons

In this narrative, she often has recourse to numerical tallies, though no numerical tabulation of any kind is to be found in her book, which although it has no appendices, does boast a very good index. She does, however, engage in the occasional numerical peroration, such as this one: “Nearly two-thirds of the half-million Jews in prewar Germany had been able to emigrate before the war. Of those who remained, 170,000 had been deported by the Nazi regime and killed. The handful who survived to see the war end numbered a mere 15,000 German Jews still alive on their native ground.” From this passage, it’s impossible to enumerate either any Jews who neither emigrated nor were deported, or any Jews who were deported, but survived and returned. Yet both numbers would be not only important, but likely of significant magnitude as well. Some tabulation might benefit excurses of this sort, but that sort of thing is more for histories, not for chronicles of this kind.

The book is meticulously footnoted (the recap just quoted, however, was not sourced), but as perhaps befits a tale of this kind, the references are typically to secondary sources, and these, perhaps inevitably, are of the mainstream viewpoint. Despite her choice of an under-attended but important subject, the author has nonetheless delivered what could be called a “popular” treatment of it, with many of the good and bad things that characterization implies.

Among the good things about this popular treatment, then, are many interesting photographs, including the one that graced the dust jacket of my copy of this book and depicts a gripping phenomenon that also is best expressed with numbers. The photograph, also reproduced on Page 68, is of some dozen or more smiling young mothers pushing perambulators down a sunny lane in the Landsberg DP Camp, each carriage occupied by a cherub born in the camp. The accompanying text notes that the fertility rates in the camps ranked among the highest in the world and in history at 50.2 babies per year per thousand population, even while poignantly noting that the rate outside the camps in Germany was a pitiful 7.6 per thousand. It would seem that among the spoils that accrue to the victors of wars are also included baby booms like the one that at the same time was gathering steam in the United States. And these same spoils, it is equally clear, are denied the losers.

Of the thousands of persons born in DP camps, no doubt hundreds have numbered in the time since among the notables of their countries, in a few cases perhaps Germany itself. Gay offers no compilation, nor does she even mention any such notables, but on my own I have noted CNN News Anchor Wolf Blitzer as having been born in the DP camp at Augsburg in 1948. Many others, no doubt, were born elsewhere to couples that first met—and married—in the DP camps. In fact, the preponderance of persons of childbearing age among those entering the DP camps is one of the many striking aspects Gay mentions in her saga, even as she notes powerful reasons among the circumstances of the entrants’ “selection” to explain why that virtually had to be the case.

Significant numbers of the Jews in the DP camps had never been deported by the Germans nor, in fact, ever been in any place occupied by the Wehrmacht, at least during the time of said occupation. So, what exactly were they refugees from, and how did they come to be displaced? They were “successful” refugees from German conquest in that they had evacuated their homes in Eastern Europe before the arrival of German forces. But they had moved east, into Soviet or Soviet-controlled territory. The treatment meted out to its own citizens in peacetime by the Soviet Union has gained a very poor reputation, and this was wartime, and these refugees were mostly of Polish, Baltic, and Hungarian nationality, aside from being Jews. Most of these unfortunates were rounded up and deported to labor camps deep inside Russia or its more-easterly satellites, and even the infamous GULAG of slave-labor camps. It is not evident to Gay that most of those suffering this fate might have fared better if they had given themselves over to the tender mercies of the Germans, even if they were deported to the concentration camps operated by those invaders. At the very least, had they done so, they would have been released sooner upon the cessation of hostilities. The USSR did not even begin releasing its Jewish refugees from Poland until over a year after the end of the War, as Gay carefully details in her account.

Other denizens of the DP camps were “bounce-back” refugees, who had been deported either eastward by the Soviets as just described, or westward by the Germans as their territory shrank and they began bringing enslaved foreign Jews back in to the Reich from which they had only recently deported so many “indigenous” Jews. These miserable souls returned to their towns and villages in Poland and elsewhere in eastern Europe to find their land and/or houses taken over by gentiles whom neither occupying power had deported or drafted into its armies. As has occurred elsewhere, including in the United States following the incarceration of most of its Japanese population, the new occupants were loath to surrender “their” properties, and encouraged the old claimants to continue on their way. Unlike in the United States, in eastern Europe the new incumbents often resorted to violence, including mass murder, to enforce their misbegotten claims. The great bulk of victims surviving this aftershock Holocaust headed west, to occupied Germany, to wait on the soil of the hated enemy until such time as they could arrange admission to more inviting locales such as the United States or Israel, whose emergence in 1948 signaled the end of the DP camps, at least insofar as Jews were concerned.

The postwar Jewish DP camps were to be found in many countries, including even one in Mexico, but so many were in the American Zone of Occupation of Germany that they outnumbered all the others combined in terms of numbers of inmates. Today’s “refugee camps” contain millions of souls, many of them not only born in the camps, but consigned to long, straitened lives spent entirely in the camps, some of which inevitably have long since taken on many of the attributes of permanent habitations. Other camps, such as those established by the United States for its Japanese residents, emptied out with heartening alacrity, with the occupants completing simple round trips at the homes from which they were collected in the first place.

Europe’s postwar DP camps, in that its occupants ended up for the most part succeeding in getting to a place they were willing to go to, are unusual, if not unique, among refugee camps, especially in view of the relatively long (as long as ten years, in some cases) periods of their existence.

Ruth Gay’s perceptive, even moving illumination of the camps, their origins, their inhabitants, and the developments that permitted their eventual dissolution (or liquidation, as the surrounding people would have said it in their language) provides, in a most unlikely setting, a story with a happy ending.