A noteworthy article appeared in the German daily newspaper Die Welt in the section “Welt der Wissenschaft” on February 7, 1997, under the title “When the Memories of a Witness become murky” about an American study on this phenomenon. Around the same time we reviewed the book Die Todesfabrik[1] by Kraus and Kulka about the POW camp Auschwitz-Birkenau and found on pages 47f. a confirmation of said study. Our example, which we will present below, shows that contemporary historiography is loaded with simple misinterpretations. In the mentioned example the authors are lacking sufficient general knowledge.

It is for this reason that under the title “The Finnish Sauna” the recreational hobby of a doctor – a sauna – is incomprehensibly subjected to false interpretation. The installation for hygiene becomes a “crime against humanity”:

“This so-called scientific work, like all work of Nazi doctors in concentration camps, has already been assessed by experts and the courts, which tried these war criminals, sentenced them.

Everyone can see, even without having expert knowledge, that the Nazi physicians continuously committed crimes against humanity. We cannot forget the SS-officer, a doctor, who resided in Birkenau in the beginning of 1943. His hobby was the ‘Finnish sauna’.

This bath house in Birkenau consisted of two rooms, which were separated by an airtight and lock-able door.

The inmates had to undress in the hall and turn in their clothes and underwear for delousing.

A large brick oven was in the first room, in which large stones were heated for several hours until they were white-hot before the beginning of the bath. On the wall across from the oven primitive benches were arranged in steps up to the ceiling.

The naked inmates had to sit on these benches pressed together as close as possible. One sat next to the other, the healthy touching the sick, of which many had contagious skin infections.

Then water was poured over the heated stones. The emaciated, sick, ravaged bodies of the inmates began to sweat heavily though the thick steam. The newcomers, who climbed to the highest benches, sweated most. The sweat ran from everyone in streams, mixed with the dirt and the puss of the festering ulcers.

When some began to faint, supervising inmates, shouting and swinging sticks, opened the airtight locked door to the second room and drove the naked inmates through to stand under ice cold showers. Drying off followed; there was always one towel per ten inmates for this purpose.

In the meantime, in the room where the underwear and the deloused clothes were returned, an indescribable chaos developed. As a rule nothing was left for the last person. Here, survival of the fittest was the law.

The result of this bath was deadly pneumonia, as was the intention of the SS-doctor.”

This is a report about events which occurred in 1943. According to our present knowledge there was only one building in the POW camp in Birkenau which contained a sauna. It was located in the construction section B Ia and was designated as BW 5a. A construction drawing of the Central Construction Office of the Waffen-SS and Police in Auschwitz is presented in drawing No. 1715 dated Sept. 25, 1942.[2] We include this plan to aid the reader’s visualization (see above). Based on additional text it can be assumed that it was this building which is meant. 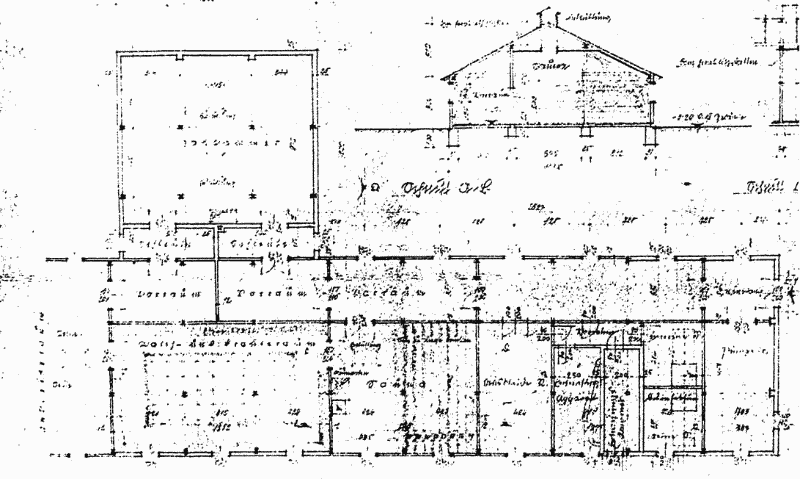 Ill. 1. A sauna for the inmates in the concentration camp Auschwitz-Birkenau, to keep them clean and healthy: A crime against humanity, indeed\.
(click to enlarge; see the section enlargement in next image.)

The false interpretation shows that the authors Kraus and Kulka did not know what a sauna is. To today’s critical readers, who in general are familiar with saunas, the sauna as described by the authors appears completely normal and the interpretation of the authors seems somewhat distorted. 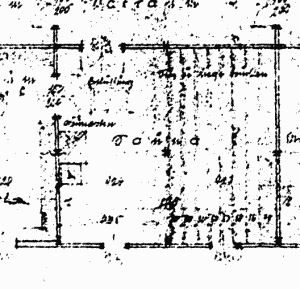 Sauna is the Finnish word for ‘sweating room.’ In Finland even the remotest farm house has such an installation. Less known is the fact that in Germany during the Middle Ages this form of bath was known as “Badstub” (bath room). This practice disappeared under of the influence of the Catholic Church.

The German soldiers in Russia and especially in the Baltic States were introduced to and appreciated this form of bath, which was almost unknown to them. Because of this the sauna again became important for hygiene.

The sanitary offices were asked to build saunas for regular use by the troops through instruction sheets, which were issued by the highest command offices. After each position change at the front, new saunas were constructed, mostly by Russian auxiliaries as “specialists.” There were two types, one with and the other without a draft chimney. If our assumption is correct, the sauna installation in Birkenau was equipped with such a chimney.

We were able to obtain such an instruction sheet for the Wehrmacht from relevant sources.[3] It can be assumed that the reconstruction of building BW 5a can be traced back to this. Even the title of the military instruction sheet, “Importance and Application of Saunas for the Resilience and Health of the Troops”, makes it clear that the authors Kraus and Kulka misunderstood the hygienic measures described. Since treatment of diseases and their prevention is an essential purpose of the sauna, we will reproduce this text verbatim:

“Treatment of Diseases in the Sauna

It can only briefly be mentioned here that the sauna bath has been used successfully for healing many diseases in the field. First are all diseases which have been treated with sweating procedures for ages: these include colds and catarrhs of the upper respiratory system, sinuses and obstinate bladder catarrhs. Also treatable are almost all forms of rheumatism, especially muscle rheumatism, backache and neuralgia. Successful recoveries were observed in sick persons with stomach catarrh and stomach or duodenum ulcers, provided they were not new bleeding ulcers. To heal a person with a sick stomach, better circulation to the surface of the skin is especially desirable; a goal which can be completely achieved in the sauna. Under the unfavorable hygienic conditions in the East, skin diseases and their variants have given us problems to a larger extent. In this category are furuncles, scabs and pus rashes, scabies, sweat gland abscesses and itchy skin rashes caused by vermin, and all skin diseases which can be healed through proper use of the sauna or at least favorably influenced in addition to other means. In addition to heat, perspiration, increased blood circulation and sap from birches, the germ- and bacteria-killing smoke certainly plays a part in the healing process. For this reason Finnish doctors especially attribute an increased healing effect to the primitive smoke sauna, and even today Finnish farmers use the completely sterile smoke sauna as an everyday room with best results. If used properly, the chimney sauna can also be flooded with the smoky aroma of burning wood by opening the oven door above the hot stones during the bath. Only in a sauna without a draft-chimney is the continuous, smoky impregnation of the room missing.

If the sweat bath is used to treat sick people, an exact treatment plan must be prepared after a checkup by the responsible physician. The sauna bath causes strong reactions within the organism, which always means a pleasant feeling for the healthy, but not for the sick, where it can only be used under a physician’s care as a cure for certain diseases.”

By summarizing the important points in this instruction sheet, the characteristics of the sauna bath become even clearer:

“The sauna bath serves to clean the body, to strengthen it and to prevent illness.”

“The sauna is a hot-air and not a steam bath.”

“It is wrong to change the Finnish sauna into a steam bath by continuously adding water.”

“After the sweating and washing follows a sudden [emphasized added] cooling off by pouring cold water over the body [...].”

“In no case is one permitted to leave the sweat bath without a thorough cooling-off.”

“The sweat bath serves first for hygiene and cleanliness. There is no other bath that cleanses the skin surface in a similar way.”

“[... ] regular use of the sauna is the best proven means for hygiene, strengthening and health preservation.”

In conclusion it should be indicated that Kraus and Kulka were not the only ones who made incorrect inferences. The witness Marcha Ravin had a similar experience; her testimony was reproduced by the pharmacist Jean-Claude Pressac in his book[2] on page 53.

This is how a regular visit to a sauna, a way to preserve health or heal inmates, was named a “crime against humanity” because of lack of knowledge.

This event shows how witness testimonies can be seriously distorted and how the realities in Birkenau, where the well-being of the inmates was evidently a priority, can oppose these testimonies. It also indicates once more that considerably more research is necessary.