Serge Klarsfeld: At Auschwitz 1,000 Jews Deported from France Were Gassed ... in Bed!

With two years’ delay I now learn of news about Auschwitz which, as of late 2010, should have made the headlines of the world press and forced historians of “the Holocaust” or the “Shoah” to revise their vulgate of the extermination of the Jews. Strangely, all the media kept quiet about it. Had they for once, this time, felt that it was a case of wild imaginings taken just too far?

Serge Klarsfeld vouches for it: in September 1942, at Auschwitz, 1,000 Jews deported from France by “Vichy” were gassed ... in their beds! I do not recall ever having noted such information in the two fat volumes of his Vichy-Auschwitz (Paris: Fayard, 544 pages in 1983 and 415 pages in 1985). For me this is a novelty, discovered in a little book that a particularly astute revisionist lady has just given me, pointing out the passage that intrigued her. Entitled Pie XII et la Shoah / Le choix du silence?, the 86-page booklet was composed by Ph. Chenaux, S. Klarsfeld, G. Krupp and M. Viot under the direction of Mgr Dominique Le Tourneau (Paris: Pierre Téqui, 2011). It is in fact a compendium of those authors’ papers for a brief seminar on “Pius XII and the Jews: His influence on Vatican II,” held in Paris in November 2010. 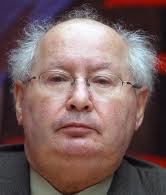 Bringing up a deportation of Romanian Jews in 1942, S. Klarsfeld, for his part, writes: “Vichy gives its assent. During the night, the prefecture of police [of Paris] takes out the files on the Jews concerned: on the morning of September 24, 1,500 Romanian Jews are arrested; the next day 1,000 are deported and, after a thirty-six-hour journey to Auschwitz, gassed in their beds” (pp. 45–46). Two lines afterwards he is conferring honours on Father Patrick Desbois, a holy prankster if ever there was one. See (http://tinyurl.com/a28z89k).

No source is provided to support the veracity of this account of a miracle that would have defied all the laws of physics and chemistry. No document is mentioned. No reference. No “testimony.” At Auschwitz, according to the legend, Jews were gassed with Zyklon B, a powerful pesticide that was, in substance, hydrogen-cyanide gas, which adheres strongly to and penetrates all surfaces, is terribly difficult to evacuate from a room or remove from bedding or other objects, or indeed anything at all, and is also explosive and liable at any moment to gas the team of gassers using it, forbidding them any physical exertion upon the opening of the premises where a gassing has occurred—and this despite the compulsory wearing of a mask with the very most powerful filter, the “J” filter. Where the devil, at Auschwitz, would this crime have been committed? Even Danuta Czech, in her famous Auschwitz Chronicle, refrained from mentioning this form of “gassing in bed,” although she hardly lacked audacity, being the one who declared “gassed” certain convoys which were later found, in reality, to have been sent on to other camps after a quarantine at Auschwitz.

With this I hear Klarsfeld telling us yet another story in  gas-chamberese. And at the very worst time for his cause, in grave distress since at least 1995 with the outright surrender of his protégé, the uproarious Jean-Claude Pressac (http://tinyurl.com/b8e35w2).

These days his historian friends only ever evoke the gassings of Jews half-heartedly, by mere automatism and, all told, just in order to respect the good manners of a certain tradition. At 77, shouldn’t he follow their example, even if only for fear of soon ending up like his old friend Jacques Chirac? Could it be that Serge Klarsfeld’s own mental collapse began in 2010, with this outlandish invention of a thousand gassings in bed? (http://tinyurl.com/aghusht)\.