Shades of Gray in a Dark History

"Slaves, in all things obey those who are your masters on earth, not with external service, as those who merely please men, but with the sincerity of heart, fearing the Lord."—Colossians 3:22

"Masters, grant to your slaves justice and fairness, knowing that you too have a Master in heaven."—Colossians 4:1

In the last decade, the politics of guilt has proven successful in redistributing billions of dollars from collectively guilty classes to spokesmen for a collective victim class. Following on that success, other self-described victim groups have been looking for ways to join the successful shakedown artists at the "reparations" trough.

One group looking to imitate the most successful shakedown artists of the last decade is the American Negro lobby, which is working to convince anyone who is willing to listen that, seven generations since slavery was ended by the bloodiest and costliest war in American history, the descendants of slaves should be compensated for work done by their ancestors. These self-declared representatives of America’s "victim class" are looking to private corporations and public institutions for recognition of their grievances and compensation for imagined losses.

It is amazing that anyone takes the slave reparations lobby seriously, but a precedent has been set by the Holocaust industry, led by Edgar Bronfman and the World Jewish Congress, in the 1990s. Since the possibility that huge settlements might be obtained through American courts no matter how frivolous the claim, it is no surprise that the professional publicity seekers, lawyers, and extortionists who have exhausted the income stream from the decades-old civil rights movement are looking for new ways to make money for themselves. The U.S. government, for its part, has cooperated in portraying Southern slavery in the worst possible light. Slavery is to the American Civil War what the Holocaust has become to World War II: a convenient, after-the-fact excuse for the barbaric behavior of the victors.

With the slavery reparations movement in mind, Walter Kennedy expands upon ground covered in his other book, The South Was Right! Myths of American Slavery presents slavery as a worldwide phenomenon, as old as recorded history, that was practiced nearly everywhere. People became slaves through war and by birth. They were traded from biblical times and before.

Slavery came to North America with Europe’s earliest settlers and before that was practiced by the American Indians, who enslaved each other. For example, Pequot Indians, after losing a war to Massachusetts colonists in 1637, were enslaved and sold to sugar plantations in the Caribbean. Negro slavery in New England started even earlier when Dutch colonists introduced the practice to what would later become New York in 1626. Slavery later became too expensive to keep in the Northern states, and slavery was abolished in the states where it was first established. In order to recover their investment, slave owners sold their slaves to masters in the South, where cotton production made slavery a perceived necessity.

The American movement to end slavery, Kennedy notes, had many members in the South, where the effort focused on cooperating with slave owners in finding ways to end the practice in a manner fair to all parties involved. The abolitionist movement that was formed in the early nineteenth century held a different view, and promoted more radical solutions for ending the South’s "peculiar institution." The abolitionist view was that slavery was a sin and had to be ended. Since the slave owner was a sinner, compensation for the loss of slave property through emancipation was out of the question.

The rise of the abolitionist movement changed the effort to end slavery in the United States from a cooperative to an adversarial one. Southerners became defensive and defiant toward Northern abolitionists who condemned them as sinners for owning slaves, no matter how the slaves themselves were being treated. Southerners viewed the revolution in Haiti, which saw the genocide of the French by African slaves, as an event that might repeat itself in the South. Abolitionists saw this as a possibility as well: Extremists such as John Brown worked to foment just such a revolt—further polarizing the situation.

Kennedy’s Myths discusses the antebellum debate over whether slavery was in itself sinful. Abolitionist and Christian leaders hotly argued the issue in forums and newspapers of the day. Since the Bible was the chief source to consult on matters of sin, pro-slavery ministers of the day pointed out that nowhere in the bible was slavery itself condemned as sinful. There, the master-slave relationship was treated as a family relationship similar to other family relationships. Fathers had responsibilities to their offspring and children to their parents. Likewise, slaves owed loyalty to their masters, and masters were obligated to treat slaves justly.

The abolitionists countered with non-biblical arguments concerning the indignity of slavery. The frequent abuse of slaves made the sinfulness of the practice self-evident. This argument was countered with the observation that spousal abuse didn’t make the institution of marriage sinful. Sin within the structure of the relationship did not make the relationship itself a sin. The Yankee abolitionist movement, Kennedy concludes, was not based on Christian teachings, but rather, a social movement with a different pedigree. 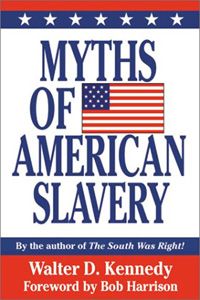 After presenting the history of slavery in America and the rise of the Radical Abolitionists, Myths surveys the conditions under which blacks lived in America before 1860. Masters, Kennedy notes, were obligated to provide food, clothing, shelter, training, and employment to their slaves. They were also responsible for providing for the children of slaves and for elderly slaves. Christian slave owners did not own them body and soul. They owned only the slaves’ labor. The rest belonged to God. Free blacks, on the other hand, were on their own.

States that outlawed slavery also discouraged free blacks from settling in them. Whites in Northern states resented the presence of blacks, and state legislatures passed laws restricting land ownership from them. Free blacks, it was noted, were free to starve. Most who supported the abolition of slavery also backed the repatriation of the Negro to Africa, or resettlement elsewhere outside North America.

The life of the slave, on the other hand, was not always so bad. Some slaves were allowed to moonlight, earning their own money for luxury items to supplement the necessities provided for them by the master. Their lot was, nevertheless, slavery – even if it was sometimes a comfortable existence. Like the moral of Aesop’s fable of the wolf and the dog illustrates: Better starve free than be a fat slave.

The biggest political myth surrounding Southern slavery, in the opinion of this reviewer, is that the secession of the South was motivated by the desire to preserve slavery in response to the election of an abolitionist president in 1860. That is, that the South fought to keep blacks enslaved and the North went to war to free them. If this is true, it presents a puzzle that is seldom discussed: How could the South claim its freedom from the Union formed by the U.S. Constitution while not recognizing a slave’s right to be free from a master? On the other hand, how could the U.S. government recognize the right of the slave to be free from the coercion of the master while dismissing the right of a state to leave its voluntary bond with the Union?

Kennedy exposes the premise of Southern secession over slavery to be a false one. The South seceded over taxes. The North went to war to collect them. Slavery was protected by the U.S. Constitution when States started seceding from the Union. The president did not have the authority to end slavery, even if he wanted to end it. But that is not as sexy or as altruistic as a desire to spread freedom or to preserve the Union. Nor does it make for exciting slogans like "Southern rights." In politics, sexy reasons trump real reasons.

Later generations are left to sort through the rhetoric to discover the truth.

Finally, Kennedy discusses the legacy of American slavery. It continues as an issue that generates rhetoric designed to divide America by race and by region. Professional agitators and shakedown artists look to profit from possible "reparations," while politicians hope to gain support by apologizing for America’s slave past. America, the author argues, owes neither reparations nor apologies. Compared to the typical sub-Saharan African of today, black Americans come out ahead by every measure. Blacks in the United States, rather than suffering from their slave ancestry, have benefited from it.

While Kennedy presents his arguments in a well-organized manner and backs his position with facts, the book’s tone suffers when the author complains about "liberals" and "the media" not presenting the facts. Though he is correct in his assessment of how the history of American slavery is distorted and used as a political wedge, his rhetoric comes across as whiney, if not paranoid. Myths is the weaker for it. The reader knows that it is the victor’s view that becomes official history, and that the defeated must suffer these distortions until his day comes, or he disappears and the political utility of an historical myth ends. There is no use complaining about it. Present the facts and await your turn. That is all that can be done.

Myths of American Slavery is worth reading, but it should be read with other works which frankly discuss the issues that caused the South to secede and Lincoln to go to war to prevent that. In conjunction with works better informed on the causes of secession, Myths of American Slavery can add depth to an understanding of the roles of both slavery and the Civil War in America’s current political mythology.