On a bronze bench on the Georgetown University campus, looking toward White-Gravenor Hall, sits the bronze effigy of a slim gentleman holding a cane to the ground and gazing beatifically at a chessboard occupying the center of the bench. There’s plenty of room at the opposite end of the bench for would-be friends of (the gentleman represented by) the statue to sit and pose for photographs with an icon of western civilization who truly may be held instrumental in the violent and early deaths of hundreds of thousands of American soldiers along with even greater numbers of Europeans, citizens of his native Poland among them.

And plenty of people do, with pride of association beaming from faces reflecting utter ignorance of the sin and treachery so abundantly committed by (the man represented by) the bronze figure on the right side of the bench they sit on. And how not? The very plaque that adorns this disinformative statuary proclaims this Catholic Pole to be one of the “Righteous of the Nations of the World,” according to the State of Israel, and “A Just Man” to those who visit the campus of the Catholic Georgetown University. He is, by the subtitle of E. Thomas Wood’s 1994 hagiography of Jan Karski, the “Man Who Tried to Stop the Holocaust.” 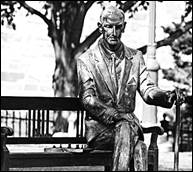 Jan Karski and The Bench

Hogwash. The man whose image is cast in immortal bronze on the bench, in capitals all around the world between Washington and Warsaw, was a base opportunist who exploited the very real suffering of Europe’s Jews during World War II to serve the interests of his first employer, the Foreign Ministry of the government of Poland that in September 1939 evaporated before the combined onslaughts of National Socialist Germany and Soviet Russia. Once the ship of the Polish (non-communist) state started sinking after World War II, this resourceful “rat” jumped to the safer decks of the United States, in whose language he acquired very useful tutelage during service in Poland’s mission to Britain before the War. In 1952, by the intercession of his Georgetown sponsor, Father Edmund Walsh, he landed a post on the faculty of Georgetown University’s vaunted School of Foreign Service, remaining on its payroll until his death in 2000.

But this hardy survivor did not stop his enterprises with subjects like “Material towards a Documentary History of the Fall of Eastern Europe (1938-1948),” his dissertation at the very same institution at which he began his career in that same year. No, after the Communist domination of Eastern Europe became an established and familiar fact, Elie Wiesel, of Holocaust-survival fame, tipped Karksi off that the market for Holocaustology was heating up, and that he might find it a good career move to jump on that bandwagon, whose course Wiesel was already steering from his bully pulpit at Boston University. Karski’s linking up with E. Thomas Wood for the book Karski: How One Man Tried to Stop the Holocaust was a reprise of Karski’s earlier caper ironically chronicled in Wood’s book’s chapter 11, in which Wood describes the writing and publication of Karski’s own 1944 bestseller, The Story of a Secret State. That book rode the back edge of America’s wave of war fever originally contrived by its own President Franklin D. Roosevelt, to prolong America’s wrenching contributions to Europe’s conflagration instigated by Jewish antipathy for Germany’s National Socialist government. The later book rode what might be the crest of America’s wave of Judeophilia inspired by Israel’s 1967 war against neighboring Arab governments that Israel said were threatening its existence. And the reprise, like the original, was another success for Jan Kozielewski, which is the birth name that somehow became lost in the convoluted career that its erstwhile bearer led through his long and very creative life.

Kozielewski/Karski quickly became a darling of the surge of Holocaust iconography that was launched after Israel’s 1967 war against its Arab neighbors and the need to cover up who started it, and why, and what its consequences were. Here was an issue whose time had come, and neither Karski nor his Catholic (Georgetown University) employer was in any way above cashing in on it. To the contrary, it was about this time that the Jan Karski Institute for Holocaust Education took up residence in the hallowed halls of that institution of higher education near the banks of the Potomac. Follow the money—especially if you’re on the receiving end!

Kozielewski’s movements place him “on the scene” of critical events like a veritable Forrest Gump of war, genocide, and all the plotting and scheming that goes into making such things, even after discounting his numerous and egregious exaggerations of his roles as a lieutenant in the Polish Army, a junior diplomat in the Polish Foreign Ministry, a courier-turned-public-relations-agent for the London-based Polish government in exile, a best-selling author, a university professor, and finally a saint.

It may have begun in London in 1937, when Kozielewski was a very junior diplomat in Poland’s embassy, where the ambassador, Edward Raczynski, was privy to secret communications among Poland, Britain, France, and the United States in which the American president was assuring the Europeans that the industrial and military might of his country was behind them in any moves they might make to oppose German initiatives on the Continent. To Poland, of course, this provided a free hand in dealing with troubles arising from its oppression of German minorities trapped on Polish territory by the Treaty of Versailles, a freedom it exploited vigorously. Our saint may well have been privy to all these machinations.

Be that as it may, Kozielewski was returned to Warsaw by February of 1938, where he could well have been privy to the part taken by Poland’s foreign ministry in the escalation of tensions with Germany instigated, ultimately, by the renegade president of the giant in North America, Franklin D. Roosevelt. But our man was still a lieutenant in the horse artillery of the Polish Army reserves, and he had, however reluctantly, to heed the mobilization order of August 23, 1939, that preceded the “surprise” attack from Germany a bit over a week later. On that infamous September 1, where was Lieutenant Kozielewski? With his horse-artillery unit stationed in the Polish army barracks at—Auschwitz! When the first explosions occurred, the unit’s horses reportedly ran away, so the entire unit, Kozielewski says, turned and ran without firing a single shot in resistance. The story says a lot about how the Wehrmacht found Poland’s opposition such a joke.

But our unbloodied hero continued the fight by means that required neither shooting nor standing his ground. His counterattack of subterfuge began with misrepresenting his rank to his Soviet captors, who, accepting his claims of being a mere enlisted man, released him before taking 15,000 of his fellow officers to Katyn and shooting them. From at least this point, Kozielewski surely realized that deceit could save his life. But it could do more—much, much more.

His wartime wanderings thereafter took him to many places rarely visited by Catholic Poles, including the Warsaw ghetto, where he witnessed atrocities witnessed by no one else, and reportedly the concentration camp at Belzec, except that he later admitted his penetration of “Belzec” actually occurred at a transit camp some kilometers distant from Belzec, where he then made reports of goings-on seen by no one else. Later, while touring the United States, to which his country had long since delivered the war desired by its president, he, like the “real” Forrest Gump, gained an audience with the very same President Roosevelt, who presumably thanked Kozielewski for his assistance in the former’s diabolical plot. After the fact, we hear that Kozielewski treated Roosevelt to hair-raising stories of cruelty by the Germans to people of the religion of Roosevelt’s Secretary of State Henry Morgenthau, Supreme Court Justice Felix Frankfurter, Bernard Baruch, and many other key supporters. These stories—of the interview, and of the atrocities—benefited this Saint of Slaughter on the park bench enormously.

And so it went, on and on and on over a career that at that point still had more than a half-century to run: exploitation and opportunism. This is the formula, it may be seen, for getting your effigy cast in bronze and placed on the grounds of the Catholic bastion in the capital of the American Imperium.

Let us all take note—very good and careful note—of how this is done, and accord the various images of Karski that bedeck various campuses and public places around the world the respect they deserve.

As the pigeons do, in most of those places.