"Shortening the War" and "Saving Lives"

A crawl at the end of a recently released movie1 announced, as though it were some kind of fact, that breaking the encryption of German military communications during World War II “shortened the war” by two years and “saved” 14 million lives (not specifying which sides the lives were on). The hawking of such factoids as these is so profoundly mendacious as possibly to surpass all the other multitudes of lies that are concocted and put about to justify killing and destruction.

So unambiguous, so bald-faced, so inherently factual-sounding is this sort of notion that those at whom it is directed swallow it without so much as an instant of the sort of hesitation that other statements, such as “They instituted a vast program of genocide using gas chambers” could arouse in the preternaturally thoughtful. Much less do they inspire any of the retrospection that memes such as the Domino Theory arouse among those few who indulge in later reflection on ideas that they accepted in the past. Being utterly unprovable, pronouncements such as “Atomic bombs saved 500,000 American lives” pass into unassailable fact without further cavil.

This device, like many others, exploits the limitless character of the logical construct of counterfact. At its purest, counterfact can seem utterly irrefutable, as in “If I don’t pull the trigger of my gun, no bullet will emerge from its muzzle,” which is subject to extensive support, at least so long as your gun remains in your hand and under your control. Once someone else gains control of your gun, of course, a bullet may indeed emerge from its muzzle, quite without your having pulled the trigger.

Thus, the “factuality” of counterfact relies essentially upon typically unvoiced assumptions regarding context (there is, actually, no “factuality” to counterfact, as the term itself implies). This is where the use, and believability, of counterfact becomes the propagandist’s plaything and everyman’s perceptual poison pill. It exploits the universal failure to question, to wonder, to suspect. One can’t, after all, question quite everything one hears, at least not penetratingly or even sufficiently. Counterfact can have the ability to “fly under the radar” that even the most perspicacious among us devote so much of our mental energy toward maintaining. 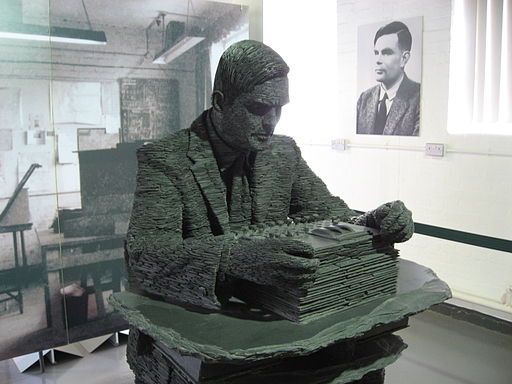 Alan Turing statue at Bletchley Park is made of about half a million pieces of slate; coincidentally the conservative estimate of the number of German civilian casualties of Allied Strategic Bombing.
Source: By Jon Callas from San Jose, USA (Alan Turing) [CC BY 2.0 (http://creativecommons.org/licenses/by/2.0)], via Wikimedia Commons

Let's parse the assertions that inspired me to write this essay. “Shortened the war.” Now, what war? That’s obvious. It was the war between Great Britain and Grossdeutsches Reich that began on September 3, 1939 and ended on May 5, 1945 with the surrender of the latter to the former, et al. This war began when Great Britain declared war on Grossdeutsches Reich when the latter invaded Poland, not when Germany attacked Britain, as it did only after sustaining repeated bombing attacks from Britain. So, one way the war could have been shortened, at least from the British-German perspective, would have been for Britain to abstain from declaring war in the first place, for Germany’s invasion of a country in fact quite far from its borders. The “war” would never have started in the first place.

But let’s just assume that this “war” was in some way inevitable, immutable, required by justice, or whatever. From there, then, what was this war? It was, after the pronouncements at Casablanca of Britain then united with the USSR and the USA, that the requirements on Germany of ending the conflict were “unconditional surrender,” that is, complete occupation and subjugation of the people and territory of Germany to its enemies. So, perhaps this “war” could be better described as “the campaign to conquer, occupy and utterly subjugate Germany.” Now, some (on the Allied side) might see this also as a noble aim, but others, of a more-thoughtful stripe, might see it as somewhat wasteful of the blood and treasure of both sides, as well as perhaps in excess of “proportionality” of response for having invaded and trying to annex parts of neighboring territory.

But thought along those lines was near-treasonous during the titanic struggle between nations of 1939-1945, and through a pernicious form of suspended animation encouraged by those who benefit from it, the same thoughts might still be as good as treasonous to this very day. Wars, it might be said, are forever, and truces, armistices and peace treaties be damned. Those who profit from past wars number at least as many as those among us who stand to profit from future wars, and must be opposed and counteracted with at least as much vigor as we devote to scotching future projects for destruction and killing.

Let us consider some counter-counterfact. Consider, for example, that the British had not succeeded in breaking the code used by the Germans. The Germans would then have enjoyed various kinds of tactical advantages that they in the event did not enjoy. They might have been able to bomb targets in Britain with less, or no, interference from the RAF’s fighter aircraft, in the process crippling British war-production capabilities more than they did.

Conceivably, they might have impaired the Allies’ counter-invasion capabilities as demonstrated in Normandy on June 6, 1944 to the point where the invasion might have been repulsed, or even might not have been launched in the first place. Germany would have remained in control of the Continent for another year, during which its control might come, quite realistically, to be seen as indefatigable by the British along with at least their western allies. The Germans might have found more resources to throw against the incursions on its territory approaching from the east from the USSR and from the south up the Italian peninsula, and so on, and so on—such things are ineluctably path-dependent.

Britain and its American allies, who had yet another war to prosecute in the Pacific, after all, might have quietly stood down somewhat in their project of subjugating Germany, or even reached some sort of truce or armistice with the power so invincibly holding much of Europe in its thrall (Britain also had colonies in the Far East to regain from Japanese incursions). History even yet steadfastly maintains a smothering silence as to the numerous and generous peace offers extended to Britain and France by Germany before the entry of the United States made the outcome all but inevitable.

The “war,” however that artifact is delineated, might or might not have been wound down; if it had been, it would have entailed far fewer “deaths” (the 14 million) than in fact it did. It might have “ended” a year or two before it is recorded as having done. All the “scare quotes” around the various terms here used are not only appropriate, they are necessary, as each refers to one sort or another of nominality, such as a “state of war” existing between different polities. Such things are easy to count, but impossible to appreciate for all that they really are, much less could have been, or not been. So, the duration of a war is seen here to be virtually an abstraction, quite aside from who instigated the war, at what rate people are killed in or from it, and which side ultimately in fact wins it. But what about all those “deaths?’

Death, it would seem, cannot, could not, in any way conceivably be judged any sort of abstraction. People are killed, one clearly understands, or they are not killed—rather like the bullet emerging from the muzzle of the gun discussed above. But what is it, at the end of the day, that kills someone? Is it a bomb dropped from the bay of a Lancaster bomber, or is it the decision of Arthur “Bomber” Harris to bomb Lübeck on a certain day in 1945? Is it the decision to attain “unconditional surrender” arrived at in Casablanca on that black day in 1943, or is it the decision of Adolf Hitler to invade Poland on September 1, 1939? Maybe it was the decedent’s parents having a child. Who is killed, and quite why, is usually impossible to assign a cause to. If the breaking of the German code “ended the war earlier,” perhaps that saved British lives, and German ones, and those of other nationalities. But the assignment of such non-deaths to any particular cause would seem well beyond even God’s capabilities to elucidate.

And then there are the deaths that ensue from one side’s gaining an advantage in the sort of killing contest that that war, like all wars, in fact was. Perhaps the people of Coventry were spared a bombing attack in 1943 because of a decryption of a German order. The crews of the intercepted bombers would have sustained quite a number of deaths from the successful interdiction by the RAF’s fighters. But back in Coventry, where munitions, guns, bombs and perhaps even bombers were made, the RAF’s capabilities to visit death and destruction upon the people of Germany, and even France when it came time to counter-invade that country, were significantly increased. Do the deaths thus imposed come into this calculation of 14 million lives saved? Maybe the lives saved were British, or American, and others were not counted, at least not if they were deaths instead of continued lives.

God is quite what those who announce such conclusions as the “two years” and “14 million” pretend to be. Do we who read the crawl after an interesting movie discern what is being attempted on our faculties? If we hear a voice in our dreams commanding us to go forth and … whatever, do we understand that that was God’s voice, and that we must obey, to the extent our energies and fortunes enable us to?

Actually, no. The one was a dream, and the other is a lie, perhaps invidious, perhaps merely romantic, or perhaps even just hoped to arouse favorable emotions, for whatever benefit that might eventually impart to the liars.

Propaganda is in the very air we breathe. We can no more filter out lies from our perceptions than we can hold our breaths. But, opposed to our inevitable failures, we can nonetheless extend our efforts to cleanse ourselves of the poisons in which we are immersed well above our heads every day of our lives, to find those points of greater vulnerability, and fortify those, in hopes that, thus spared, we might retain enough energy to resist yet another assault on our grasp of truth.

The assault, we may confidently expect, will be made—always and everywhere. From it, we each of us will be able to glean only such truth as we manage successfully to choose as such—or as close to it as we can get.