Simon Wiesenthal Exposed as a Fraud and Liar

Now that professional "Nazi"-hunter Simon Wiesenthal has added knighthood by the British crown to the numerous honors that have been heaped upon him, Gerd Honsik’s recent Fiend and Felon is just the book to put the seedy Galician conman back in his place. While there have been many shorter revisionist exposés of Wiesenthal, this one offers the dual advantage of numerous photos and documents, elucidated by easy-to-read, large-type text that traces Wiesenthal’s shady career from his contradictions and evasions on his wartime experiences (Soviet functionary? Red partisan? German collaborator? Or all of the above?) to his postwar misrepresentations (the Polish-born arch-Zionist claimed to have been a postwar German expellee!) and of course Wiesenthal’s career as a "Nazi hunter." 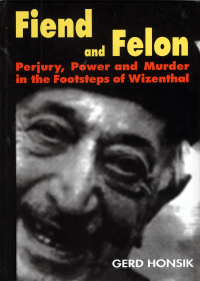 As an Austrian, author Honsik has a strong grasp of the politics – governmental and media – of Wiesenthal’s Austrian base and provides details of Wiesenthal’s manipulations there that have hitherto received little notice in English-language media. Among them is documentation of Wiesenthal’s scurrilous campaigns against Austrian politicians who have proved insufficiently loyal to the canonical Holocaust and to the interests of Israel, from Austria’s Jewish chancellor Bruno Kreisky (who called Wiesenthal’s bluff by accusing him of having been an informant for the Gestapo during the war) in the 1970s to Jörg Haider in the 1990s. Honsik’s knowledge of the Austrian political and legal milieu also proves of advantage in gaining access to documents and records missing from other treatments, whether friendly or adversary, of Wiesenthal’s life and times. Thus, Fiend and Felon includes a lengthy consideration of a letter alleging a shady business deal between Haider’s family and a Third Reich Gauleiter, and the letter’s exposure as a forgery by Austrian police, as well as accounts of his vicious campaigns against such Austrian revisionists as the prominent engineer Walter Lüftl.

But the heart of Fiend and Felon is quite properly its treatment of the "Nazi"-hunter’s most famous prey, from Adolf Eichmann to John Demjanjuk, and including considerations of Wiesenthal’s roles in the cases of such alleged monsters as Josef Mengele, Treblinka commandant Franz Stangl, and Walter Rauff, one of the numerous alleged inventors of the mythical gas van. Readers who look for exhaustive rehashings of the charges, trials, or even Wiesenthal’s role in the "hunt" for these and a good dozen other alleged wartime "perpetrators" may be disappointed. Yet each vignette offers solid rebuttal to the key aspects of the charges against the accused as those charges relate to the Holocaust – something all too often missing even in accounts by self-styled revisionists.

Fiend and Felon is anything but a dispassionate account of its subject’s life and work. Author Gerd Honsik, a committed Austro-German nationalist as well as revisionist, has crossed swords with the old fraud more than once and currently lives in exile at least partly as a result of Wiesenthal’s ability to convert the moral dross of his actual past into a fool’s gold, with which to dazzle, threaten, and tyrannize the gentiles among whom this self-proclaimed Zionist has always chosen to live. Its English is not always perfect, but is quite passable throughout, and it includes hundreds of photographs, many of which will be new to American and British readers, and scores of documents – with English translations in a handy appendix. All in all, Fiend and Felon is an unsparingly accurate portrayal of Simon Wiesenthal, for what he is worth, for all that he’s worth.