Originally in French and Translated by the Author
by Francis Goumain
Published: 2018-11-08 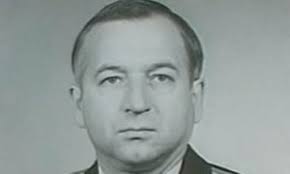 Was the Russian double agent Sergei Skripal aware of the existence of Document PS-3868?

Probably not, and it is probably not because of this document that he was attacked in March 2018, in Salisbury, while he was in the company of his daughter Yulia.

But no matter; to the extent that this document also deals with a very toxic gas and that it is often the same people who are behind these gas stories, it is worthwhile to compare what happened to Skripal with what Document PS-3868 contains: this may perhaps provide a track to the authors of this coup and their motives.

Skripal and his daughter were poisoned with Novitchok, a very powerful enervating agent that can be given to victims by injection, inhalation or application to the epidermis.

In addition to these two people, there were witnesses, rescuers, doctors, firefighters, police officers who approached, who touched the two first victims, who breathed the same air, and who found themselves poisoned: 21 people were hospitalized .

All the above is indisputable; it is our Western media which, in total unison, have inundated us with this.

Document PS-3868 not only cannot be challenged, but most importantly, it must not be, under penalty of imprisonment or physical assault as in the case of Professor Robert Faurisson, or parcel-bomb sent sent to your home as in the case of Ernst Zündel, or even deadly attack by car bomb as in the case of François Duprat. This document is more than 70 years old; it dates from April 5, 1946; it is in the trial record of the IMT, the International Military Tribunal sitting in Nuremberg; it is an affidavit by Colonel Rudolf Höss, commandant of Auschwitz from May 1940 to the end of 1943. In this three-page document Höss confesses in 10 points to the worst crimes of history.

Here are two short excerpts to be considered in light of the Skripal case, but beware, these are visions of nightmare, very toxic; the reader is warned:

Point 7: "Another improvement to the methods compared to Treblinka was that we built gas chambers that could hold 2000 people at a time, while Treblinka's ten rooms could only contain 200 each."

Point 6: "Also, after having made the extermination buildings, I decided to use Zyklon B." and, "It took three to fifteen minutes to kill the men in the gas chamber, according to ambient conditions. We usually waited half an hour before reopening the doors to remove the corpses. After taking the goods away, our special Kommando took the gold rings and teeth of the corpses. "

So, in the case of Skripal, we have two people in the open air and just getting close to them is enough to make you have to go to the hospital. In the case of Höss, we wait half an hour, we open the door, we remove 2,000 corpses from a closed room and we remove rings and gold teeth.

In one case, it seems extremely delicate, difficult and dangerous to handle (still-living) bodies exposed to chemical agents; in the other, it poses no problem, no hospitalized Kommando, no one to join the pile of corpses on the spot, no ABC suits.

From a logical point of view, the two stories are contradictory, but we do not necessarily realize it because in both cases we start from the emotional; we note who are the bad guys and who are the good guys, and from there, we deduce the veracity of the stories.

In the case of Skripal, it is very important to emphasize the dangerousness of Novitchock to show the particularly evil, devilish character of those who designed it: the bad Russians. They are bad guys, so they punish their traitors with gas, so these are our enemies to shoot down.

In the case of Höss, as if the gassing was not enough, it was also necessary that the SonderKommandos remove rings and gold teeth out of the corpses: so, the Nazis are really bad guys, so it's true they were exterminating in gas chambers.

Let us also take the example of gassings in Syria: did the Syrians use gas? But yes, of course, and there is no need for proof; reasoning alone is enough: the Syrians are enemies of Israel, so they are bad guys, and bad guys use evil weapons so the Syrians, who are bad guys, used gas, which is a wicked weapon.

It may be that the Russians, allied with the Syrians, have undergone the same labeling: they are allies of the Syrians, therefore also enemies of Israel, so bad guys, and therefore they use Novitchock. The purpose of the Skripal affair, if it is a plot, would have been to weaken Russia to hinder it in Syria: simple supposition, do not mislead us in the same way that our media owned by we-know-whom, let's look for evidence.

All that can be said as things stand is that if the Russians really used Novitchock, they made a huge mistake, for since 1945, gas equals Nazis, they know it, since they were the accuseds in the IMT in 1946 and they even actively participated in the validation of this thesis.

So, is Skripal a new episode in the long conquest of the Promised Land?

It is not certain, but in any case if Document PS-3868 were a little better-known and compared to the Skripal affair, it might have triggered a crisis, a second media cyclone after that of March 2018, a Cyclone B in a way. Cyclone - that is, Zyklon in German.