On September 7th I made the 4-hour drive from Visalia down to Costa Mesa in Orange County to address the IHR Special Meeting and schmooze with friends. David Irving was the main attraction, speaking about his current troubles with the thought police on three continents, which he did with a concentrated force and some humor, though it is clear he is becoming increasingly angry over the unremitting censorship and sabotaging of his life’s work.

The meeting at the Marriot Suites was quite a success. Promoted conservatively and primarily to Southern Californians, it drew more than a 100 attendees. Extra chairs had to be brought in for the overflow. The lecture room was directly off the small main lobby, and anyone could have walked in. Not a hint of trouble arose. The situation now is very different than it was 10 years ago, when every IHR meeting was an adventure that had to be managed with the tactical genius of a Jeb Stuart to avoid a confrontation with the JDL and other forces of darkness.

One of Irving’s recurring themes the last couple years is that he is not going to take it anymore, that he is going to “fight back.” That is, he is going to use the law here and abroad to protect his good name, to demand legal redress everywhere possible for libel, slander, censorship and every other little maneuver the Lobby is using worldwide to destroy him and his work. Who is there who does not wish him every success in nailing those people to the wall? If anyone can do it, Irving can.

I’ve had my own problems with being slandered, censored and shut down. With one exception (Harvard lawyer Alan Dershowitz), I was never tempted to think about legal redress.

When I got into revisionism I had already been through one censorship trial (in 1961, when I was prosecuted for selling Henry Miller's Tropic of Cancer). At that time I discovered first hand how artificial. I suppose I want to say phony, these proceedings are. There's good reason why they are termed media circuses. I don’t mind a media circus so long as I'm a free agent and can be honest. But when I have to participate as a player in a legal proceeding, where honesty and truth are no more important than arcane technicalities of law and the subjective whims of lawyers, it isn’t worth it to me.

I knew from the beginning I would never argue about the technicalities of gas chambers, or the great historical questions that revisionism introduces, but that I would work with free press issues and encourage intellectual freedom. I would find one way to get the message out, and when that way no longer worked I would find another, then another until so much information had leaked to the public through the barriers of media and the intellectuals that an open debate would be forced. I used newsletters, radio and TV, a book, public speaking, the Campus Project, the Internet and so on. 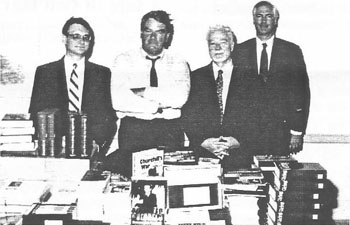 I asked the IHR audience, if they wanted to understand how I see my working method, to think of a Stephen King horror novel. To visualize a dark forest in the middle of the night. There would be a “safe-house” in a little, spooky clearing. Inside would be operatives working for the Simon Wiesenthal Center, the Anti-Defamation League and the rest of those people. Those inside the house believe they’re secure and can go on safely with their censorship work.

They don’t know it, but at this very moment an alien slime from outer space has enveloped their roof and is sliding down over the outside of their walls. In reality it’s not an alien form, it’s me in disguise. I’m looking for a way to get in. No matter what, I’m going to have my way. I seep in under a window that’s not quite closed. I start to work through the chinks in the wall. I ooze under the front door, then around the edges of the back door. It’s no use shooting me because in my alien-slime form the slugs just go straight through, then my holes seal shut. No use trying to keep me out. I’m coming in here or I'm coming in there. It’s inevitable. They’ve got to get used to it.

Suddenly I sloosh down the chimney and pour out into the main sitting room. The agents inside—they’ve never seen anything like this. The sheer inexorability of it. They react at night to alien slime from outer space like they react in daytime to the presence of intellectual freedom. They hurl their most terrible curses at this presence. Then they run for their lives. They tear through secret doors and passageways out into the darkness. But I have them covered, literally. They think they’re finished. As I embrace them in a tidal wave of slime they cry out for mercy. But they’re not in danger. 1 don’t want to hurt them. I only want to talk to them.

It’s like that in my regular life. No matter where the Lobby’s agents are, I’m going to reach out to them. Their curses don’t wound me. Their slander goes in one ear and out the other. Every once in a while I experience a little flare-up of annoyance. I see it as a weakness in my character. My job isn’t to be annoyed but to find every crack in every wall of censorship keeping revisionist theory, and thus intellectual freedom, from the people. The Lobby is in a weak, defensive position. Even the Rabbi Hiers understand in their hearts that to live as a human being there is no workable defense against intellectual freedom, no escape from it.

(I can see it now. The headline in the next SWC newsletter. Response: “Smith Is Slime. Says So Himself.”)

The genius of the Holocaust Lobby is demonstrated by how it has been able to reduce the immense complexities of public discourse related to the history of the 20th century to a one-word slogan—Hate! Those who agree with the censors are moral people who know how to approach the key cultural issues of the age, while those who disagree are haters and should not be allowed to take part in pubic discourse. These geniuses have discovered how to exploit 20th-century man’s new sensibility that informs us that it is not fully human to hate others for what they can not change. In the grip of their genius they have convinced themselves that they are hated because they are more human than all others.

When CODOHWeb was shut down at about one minute past midnight on the morning of July 4th, I was, of course, reminded that it was on that same date, twelve years before, that the Institute for Historical Review had been torched. I supposed it was mere coincidence. It didn’t occur to me, until others brought it to my attention, that maybe someone was sending me a message. Some particular person. It was just too much of a coincidence. Reviewing the development of CODOHWeb in the months before the shut down revealed an interesting pattern.

On 20 December 1995 the U.S. Congress passed House Resolution 316 “deploring” revisionism and revisionists for antisemitism and racism (hate). There was not a single vote cast against H.R. 316. In February, CODOHWeb posted the introduction to David Irving’s biography of Goebbels where, even while the moralists were preparing to censor it in America. In May, while Roger Garaudy was under ferocious attack in France for having published The Founding Myths of Israeli Politics, we made the entire text available to all Frenchmen and to the world. In June we began posting Grundlagen zur Zeitgeschichte (Foundations of Contemporary History) edited by Germar Rudolf, and featuring articles by such revisionist luminaries as Robert Faurisson. Fritz Berg, Carlo Mattogno, Ingrid Weckert, Rudolf and others. Rudolf had been sentenced to jail and his book ordered burned by a German court, and he had fled his homeland. There we were, zapping it right back into Germany, where the percentage of computer literate men and women equals our own. Now we were in the big-time. On 2 July we sent our first email package to 120 talk show hosts around the country, suggesting a discussion about whether the Holocaust controversy is an historical or a religious issue. On 4 July, at one minute after midnight, CODOHWeb was closed down, without warning, by its server.

I think I may see something of a pattern here. The Institute for Historical Review burned to the ground on the morning of July 4th, 1984. CODOHWeb shut the morning of July 4th, 1996. It's as if someone were speaking to me directly. It's not really possible. That's conspiracy talk. Am I to imagine some fat cat in Hollywood or West Los Angeles consciously designing such a warning, amused at his own invention and patience? I don't think so.

The following Saturday afternoon I was at the Orchard hardware store picking up a bamboo rake and a bag of kitty litter, and after awhile I noticed I had put four smoke detectors in my shopping cart. I already have two smoke detectors in our house. I felt a moment of embarrassment. I put one of the four back. I think five will do it.