"Sanford L. Ziff, 69, is the self-made millionaire — the founder of Sunglass Hut — who considers himself the driving force behind Holocaust education at the University of Miami. How he did it: By dangling a $2 million donation over the university's head." 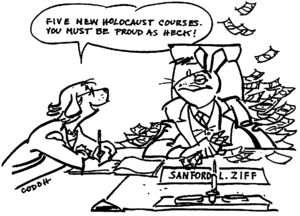 Spiegelmaus makes himself seen and heard at University of Miami

"A furious Ziff withdrew—and last month reinstated—a $2 million pledge to the university because of it."

"Shortly after the controversy, the university's trustees made the commitment to begin Holocaust education programs, and Ziff says it took his needling to get UM to come through.

"To this day, Ziff isn't sure what it was about the $288 quarter-page ad that set him off enough to yank the $2 million. Ziff is not a Holocaust survivor, nor were his parents. He doesn't even know any. He rarely goes to temple.

"But he wasn't about to let a school he attended in the 1940s, a school he had poured hundreds of thousands of dollars into, a school whose top administrators he played tennis with, get off scot-free.

"It was a stand that catapulted a man already accustomed to high society to folk hero status. Since spring, he says, he has received telephone calls and letters from Jews as far away as Jerusalem, all thanking him for standing up for his beliefs — for standing up for fellow Jewish people. He says he's even gotten standing ovations at parties.

"These days, Ziff is feeling triumphant.

"At the university's invitation, Holocaust survivors met with students this year. Academic administrators said five new courses will be offered next fall, including Holocaust literature and a course in modem anti-Semitism. A joint faculty, administration and student group is in the works to discuss the Holocaust.

"'I feel I have accomplished a great deal at the university that would not have happened otherwise,' Ziff said, beaming. 'I feel wonderful, wonderful about this. It was something I had very deep feelings about. I made the stand.'"

So I scribble a text for a modest ad, back it with $288, then Ziff sweetens the pot with a couple million and presto, five new Holocaust courses at UM that weren't there before and a new Jewish folk hero. What's the World Jewish Congress and the rest of that gang complaining about? It might never have happened without me!