Eyewitnesses of the Auschwitz-Birkenau camp have frequently testified that thick smoke belched out of the chimneys of the four crematories of that camp. One classic example is the testimony of former Auschwitz inmate Arnold Friedman. While being cross-examined about his experiences at Auschwitz, Friedman stated during the first Zündel trial in 1985:[1]

“There was smoke belching from the crematoria, and it gave us a constant smell – the crematoria being close enough and low enough for the smoke to be dispersed through the camp rather than go straight up.”

The paintings by former Auschwitz inmate David Olère, who claims to have lived in one of the Birkenau crematories for almost two years, give an artistic rendering of the general theme that pervades Auschwitz survivor statements. I give here only one example of the many Olère has drawn and painted, see Ill. 1.[2] 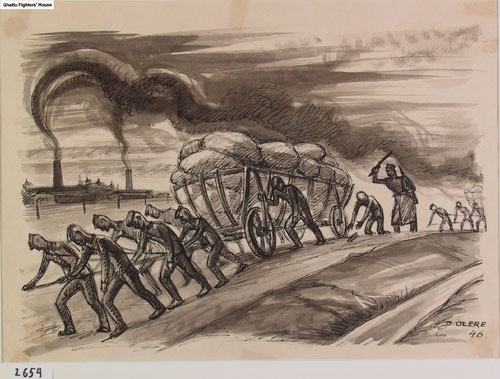 Ill. 1: "Inmates Hauling a Wagon Loaded with Victims' Belongings", drawing by David Olère, where thick smoke can be seen rising from two crematory chimneys in the background.

Also according to witness statements, the Birkenau crematories are said to have been in basically uninterrupted operation from May 1944 into the late summer of 1944, when the Nazis are said to have exterminated up to half a million Jews from Hungary and up to 70,000 Jews from the Lodz Ghetto.

At the same time, Allied reconnaissance airplanes took several air photos of the camp. Hence, if the witnesses’ claims were true, we would expect to see thick smoke emanating from at least some of the crematory chimneys on at least some of these photos. In his trail-blazing work on air photo evidence about the Holocaust – or rather the lack thereof – John C. Ball has reproduced several of these reconnaissance photos which had been released to the public by that time. He posited that none of them show any smoke-emitting crematory chimneys.[3]

Ill. 2: Carlo Mattogno's Doc. 35 with his arrow allegedly pointing to smoke rising from the chimney of Crematory III at Auschwitz-Birkenau. Note the multitude of scratches on that photo running parallel to this line. The second frame shows the same location, but taken from the image of Aug. 23. Click for a larger version of the first frame.

However, in his impressive 2005 work on open-air incinerations at Auschwitz, Carlo Mattogno hypothesized that one air photo taken by a Canadian reconnaissance airplane on August 20, 1944, over the Birkenau camp “shows a dense column of smoke rising in a spiral from the chimney of crematorium III.” See Illustration 2.[4]

Ill. 3: A section enlargement of the air photo of Aug. 20, 1944, showing Crematory III and its vicinity. The second frame has a few of the parallel scratches marked with thin red lines.

Although I do not wish to argue here that coke-fired crematory chimneys of that era did not emit smoke, I will show in the following that Mattogno’s air photo evidence is flawed. In fact, what is visible on that particular air photo is not smoke from a chimney, as Mattogno claimed (see my Ill. 1), but rather a defect in the photograph.

As can be seen on the Aug. 20 photo, there are several slanted lines crossing the photo, which are probably mere scratches caused during some step of the film’s processing/storing. One of these slanted lines happens to run across Crematory III, causing a bright smudge which appears to be smoke. Lots of these smudges can be seen in other parts of the photo as well, especially in contrast with the almost black ground in the right-hand part of the photo. I have highlighted some of these scratches in an animate GIF image, see Ill. 3. The second frame has a few of the parallel scratches marked with thin red lines. As the reader can easily see, there are many more scratches. In fact, the entire photo is covered with them. These lines are not visible on the Aug. 23 photo, which is of a much better quality.5

Ill. 4: Further enlargement of the air photo of Aug. 20, 1944, showing only Crematory III. The conical shape of the grey shade over this building is highlighted with red lines. The red rectangle denotes the rough position of the chimney. (Click for jpg version of first frame)

To support my assertion, I wish to make a few additional points:

My conclusion is therefore that this is only an error/artifact on the photo, since the entire photo is covered by these slanted scratch lines in the same direction as the one marked by a red arrow over Crematory III. One of these scratches anomalously produced the illusion of smoke rising from that chimney. 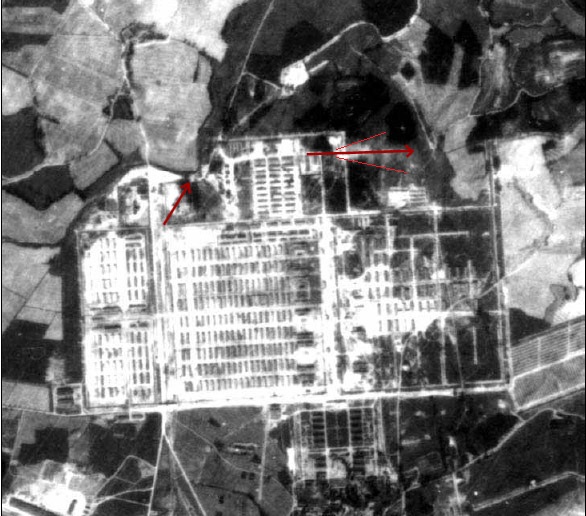 Ill. 5: Mattogno's Doc. 34, from which his Doc. 35 was taken (my Ill. 1): The direction of the alleged smoke rising from Crematory III (short red arrow to the left) is from southeast to northwest, whereas the direction of the smoke rising from the yard of Crematory V is roughly from south to north (long red arrow, center top).[6]
[Click for larger image without arrows]

Hence, as of this day there is not a single known air photo of Auschwitz-Birkenau showing smoke coming out of any of the crematories. Yet there are several showing smoke billowing from a limited area in the yard of Crematory V, as for instance also on the one shot three days later, on Aug. 23, 1944, and on one taken on July 8 of that year. Aerial photography is unable to prove that witness statements of profusely smoking crematory chimneys at Auschwitz-Birkenau are accurate. In fact, the absense of smoke in these photographs suggests just the opposite.