Some Holes – Some Holocaust

Ever since the early 1970's, there has been an attempt to establish the veracity of the widely reported claim that millions of human beings were gassed and burned in the four crematoria at the Auschwitz-Birkenau concentration camp in Southwestern Poland.

To be sure, there has always been testimony. But the essence of the revisionist challenge, from Paul Rassinier, through Arthur Butz, Robert Faurisson, and Wilhelm Stäglich, and including many more modern researchers, has been simply this: If testimony is all there is, then one should be free to question the claims.

In response particularly to the goads of Robert Faurisson, French Holocaust enforcers funded an effort by the French pharmacist Jean Claude Pressac to prove the facticity of the claim that millions were gassed and burned at Auschwitz on the basis of something other than testimony: in particular, documentary evidence and forensic (archaeological) evidence. The culmination of this effort was the famous, albeit rare, Auschwitz: Technique and Operation of the Gas Chambers in 1989.

Unfortunately, while Pressac's documentary discoveries left something to be desired, his archaeological efforts created more questions than they answered. This was particularly true in connection with the holes in the roof of the main "gas chamber" in Crematorium II at Birkenau, in which half a million persons were said to have been killed. After lengthy onsite inspections, Pressac was forced to admit that he was unable to find the holes in the roof through which the poison gas Zyklon B was poured into the gas chamber. As he wrote:

"According to the American aerial photograph of 24th August 1944, the four introduction points were located along a line running the length of the room in the EASTERN half. In the present ruins, two of these openings are still visible at the southern end but in the WESTERN half. Nobody up to now seems to have been concerned by this contradiction, nor to have explained it."

Since Pressac's book was specifically directed against Faurisson, it was left to Faurisson to respond. While the French professor of literature did in fact write several analytical critiques of Pressac's book, he was unable to contain his sense of the absurd: for while Pressac was admitting the absence of the right kind of holes in the roof of Crematorium II, he was essentially also admitting that no gassings could have taken place there. To the extent that these specific mass murders were essential to one's understanding of the Holocaust, it followed — to be sure with some impudent hyperbole — that the Holocaust did not happen. Hence, Faurisson applied a reductio ad absurdum to Pressac's admission: "No Holes, No Holocaust."

The recent efforts of Charles Provan and Harry Mazal OBE constitute an attempt to prove that Pressac was wrong, and in fact that at least some of the holes in the roof are the holes through which the poison gas was poured on to the victims. There is a reason for this posture. Over the years, Faurisson's famous quip has been widely used by revisionists to taunt the Holocaust establishment over its inept approach to the historical record. To be sure, the revisionist challenge does not depend on the issue of the holes, but the admitted absence of even these holes tended to move the establishment dependence on the revelations of testimony from the merely incongruous to the distinctly ridiculous\. 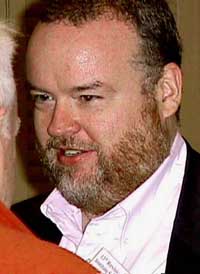 Thus, during his trial in early 2000, the British historian David Irving challenged the highly touted Auschwitz expert, Robert Jan van Pelt, to show him the holes in the roof of the Crematorium II "gas chamber." Van Pelt, in turn, argued in his expert report as well as in his testimony that the original holes through which the poison gas was induced were no longer there, suggesting, somewhat vaguely, that they had been filled in prior to the German attempt to blow up the roof. In short, it was established at the trial of Irving v. Lipstadt that the holes were not there now, but the Court's judgment held that the gassings took place anyway.

The doublethink required to hold this position is the inspiration to the now frantic efforts, not to find the missing holes, but to declare some of the existing holes to be the right ones. Mazal, for example, through the purchase of several photographs of still undisclosed provenance, now argues that he has succeeded in finding at least three of the holes used for poison gassing. Provan, meanwhile, has argued the case for a different set of holes.

There are many problems with these efforts. In the first place, the lack of expertise in these efforts are clearly exposed by Brian Renk, whose revisionist writings are widely known, and who, incidentally, is probably the only expert on either side with a master's knowledge of masonry and concrete work. Renk's critiques can be read here, while further comments on Provan's argument can be consulted here.

The second problem is that in their zeal to establish the reality of the "holes in the roof", both Mazal and Provan are contradicting the expertise of Jean Claude Pressac and Robert Jan van Pelt. That two amateurs can so easily dethrone the expertise of the world's greatest authorities on Auschwitz speaks volumes about the lack of competence and rigor in the Holocaust establishment, and furthermore, by inference, vindicates the revisionist challenge of that competence.

The third problem, as Renk's critiques show, is that these cracks and fissures in the concrete roof cannot be the holes through which the gas was poured in, and, if we accepted the claim for the sake of the argument, we would be left with a scenario of mass gassing that was not planned, never systematized, which was apparently improvised in the most casual manner, and which could have been implemented in only the most fitful fashion. In short, acceptance of the Provan or Mazal holes leads one to a conception of occasional gassings in buildings that were in no way designed or even built for the purpose. Yet such a conclusion contradicts the establishment notion that the gassings were systematically planned and carried out on a vast scale. In other words, acceptance of the Provan or Mazal holes leads to a scenario of at best some small-scale gassings. Some Holes. Some Holocaust.

Overall, it should be said that all of these efforts are based on a false premise; Provan and Mazal seem to be operating under the illusion that if they dispense with Faurisson's quip, they have somehow proved the facticity of their claims. In the end, however, all that they have managed to achieve is to denigrate their own experts, contradict their own photographic "evidence", refute their own beliefs concerning systematic and carefully planned gassings at Auschwitz Birkenau, and, quite possibly, make fools of themselves. And, last but not least, they are left, as they began, with nothing but testimony. Yet this is the inevitable result when one tries to carefully refute deliberately hyperbolic slogans: it turns the patient search for historical truth into the absurdity of overturning straw men.