Some More Testimonies from Greece

Continuing from the previous article, we will examine some more Greek testimonies, this time from the book The Holocaust in the Testimonies of the Greek Jews (To olokautoma stis martyries ton ellinon evraion). This book contains excerpts from published testimonies as well as oral ones. We will examine the most important concerning the extermination claims. 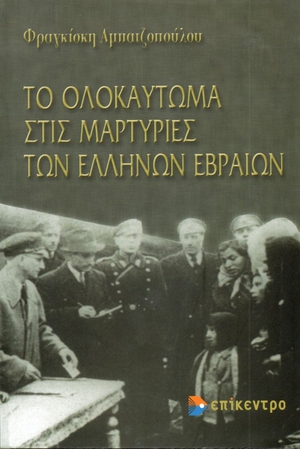 This witness was recently in the news because researchers have managed to read a letter he supposedly buried in Birkenau where he suposedly worked as a member of a Sonderkommando (see this paper). According to the book, Nadjari wrote two manuscripts (A and B). Manuscript A was written in 1944 and is the aforementioned letter. Only a short paragraph is reproduced in the book, in which the author states that the Nadjari family has been murdered by the Germans and now he expects to die. No details are given.

Manuscript B was written in 1947. It is quite detailed, but curiously Nadjari does not mention the letter he buried. Anyway, let’s see what he has to say. Upon arrival at the camp:

“At first sight everything looked normal, and in fact the Germans that received us at the station were quite good. We did not see them beating anyone, on the contrary they were all good.” (p. 53)

Then the selection followed. Old and disabled who could not walk were loaded onto trucks and driven off. He never saw them again. He and the rest went to Birkenau on foot for the shower and the haircut. They stayed in quarantine for a month, as to which he writes:

“Various rumors began to circulate, that those that have gone left in the trucks after we disembarked from the train have been burned, after they killed them. Of course we did not believe it and thought that the Poles in the camp were telling us this to demoralize us, make us ill and take our bread.” (p. 57)

He also describes the leader of his block, a Pole from France, large, always shaved and the “worst man you could imagine”, who beat them every day. Finally, he was transferred to Crematorium III (he refers to it as II as he doesn’t count the crematorium in Auschwitz) where he realized that the rumors were true. He describes the gassings as follows:

“Then, after it was filled and everyone had entered the gas room, the door was closed and, immediately afterwards, the two experts on the gas climbed above and opened four cans and emptied them from above either laughing or chatting about other things. They put back the concrete slab. Many times they came down to the small scuttle on the door, watching, with a stopwatch in hand, the minutes needed so that none remains alive (a matter of 6-7 minutes).” (p. 62)

Despite the fact that it is impossible to kill 2,500 people in 6-7 minutes, this description is in disagreement with the official claims. Nadjari speaks of ONE opening covered by a concrete slab, where there should have been four. Furthermore, the SS are supposed to have introduced the Zyklon in a basket which was then lowered into the chamber through iron-mesh columns. After the execution the Zyklon was removed by pulling the basket back up. But Nadjari has them simply emptying the cans in the hole.

After the execution the bodies had to be cremated. Nadjari first writes:

Crematoriums II and III had 15 muffles each (five triple-muffle furnaces), capable of cremating 15 bodies per hour. So in theory they could not cremate more than 300-400 bodies a day. We could push this to 500 or more and still it would be very far from 2,500. So how was this done? Nadjari claims they burned three bodies in 30 minutes in each muffle, with one of the bodies being always female as the burning was thus faster. Every six hours they removed the ashes (p. 64). Except for the fact that all this is impossible, even by his description and allowing around one hour for cleaning every six hours, they could cremate about 1,800 bodies, not 2,500 and certainly not 3,000.

In summary, this witness doesn’t say anything new when it comes to gassings and cremations, not taking into account the contradictions. Not only that, but claims such as the following are enough to shatter his credibility:

“As head of all the crematories they put Molle. […] He was the terror of the camp and Kramer himself. […] Once, he threw an entire truck loaded with patients, alive in the pit where they burned alive, in horrible pain.” (p. 60)

Menasche was a doctor. His memoir titled Memories of an Eyewitness: How 72,000 Greek Jews Perished was first published in 1947. But his narrative reads more like a novel than a report. Here is an example:

“Around the middle of May, work proceeds to a nightmarish rate. Every three hours, a train empties its wave of travelers. Usually, while the previous train has not yet left the station, another one comes and stops at the parallel track. Tireless, the doctor of the SS performs the selection. Endless lines of old men, women and children walk towards the ghastly ovens. During the 24 hours of the day, the sad parade continues. Chimneys of the crematories and pits burn non-stop. The sky is constantly black from the smoke. Night acquires a reddish hue that covers the entire camp with a horrid glow. The smell of burning flesh is choking us.” (p. 77)

So what about the facts? Well, here’s one:

“A truck is immediately sent to receive the sick. After a few minutes the load is emptied in the burning pit. It’s unnecessary to poison the sick with gas. It is, after all, much faster to throw them alive into the flames.” (p. 78)

The following illuminates even more the (in)credibility of this witness:

“We saw that in Birkenau there were four crematories, each equipped with four ovens. Each oven burned three bodies in three minutes. At such a rate Moloch gobbled up 144 victims every three minutes.” (p. 76)

Also a doctor. His testimony was first published in 1949 in a newspaper. As with the previous witness, he has a hard time writing an objective account. For example:

“The crematory is, one would say, a savage and ravenous beast with great similarity to the beasts of mythology. It’s a kind of Minotaur, feeding on human victims. When there’s no transport, and therefore no food, it attacks the prisoners of the camp. It is not enough for it then to devour all the sick, what it needs is a specific number of people to devour, whether disabled or perfectly healthy. In order to satisfy its ravenous hunger, in order to preserve, one would say, in good condition its monstrous organs, it asks for two, three, four thousand victims, at once.” (p. 96)

According to him, after a transport arrived, the camp doctor sent to the crematory about 75% of the deportees. Every day more than 15,000 (!) people were burned. In addition to crematories, there were also two enormous pits where the Jews were burned with logs. More than 200 train cars with logs were always available for this. The prisoners, as they unloaded the logs from the train, were saying in all seriousness:

The witness also gives the testimony of one of his friends, a reporter in a newspaper, who worked as a Sonderkommando. He describes a gassing in Crematorium II as follows:

“This door closes hermetically. Above it there is an electric clock and some kind of skylight which is closed with a very thick glass. An SS man opens the box and takes out two bottles, similar to heat-insulating bottles. They are bottles with asphyxiant gasses. He opens the skylight, throws with force the bottles, and he closes it quickly. The electric clock shows 8:05. As they fall, the bottles are smashed, and they cause a detonation. Immediately I hear a second sound, like hundreds of snakes hissing. Desperate voices and horrible screams are getting stronger. Am I in hell? The walls of the gassing room are shaking from the desperate hits of the suffocating unfortunate victims. Hands hit the glass of the skylight intending to break it. […] Then there is absolute silence. How long did this last? Three minutes, five minutes? The SS man looks at the clock and presses a button. Inside the gassing room a fan clears the atmosphere. They open the door. What a dreadful sight!” (p. 102)

Needless to say, this description is entirely fictional. Suffice it to point out that it is completely at odds with the official version (see above).

One final testimony that appeared in a Jewish newspaper on January 4, 1946. Officially, the Hungarian Operation involved some 400,000+ Jews. Here’s what this witness states about this with characteristic drama:

“The macabre transports of the Hungarians had started to arrive. In 3-4 weeks, the trains arrived day and night, and vomited their innocent cargo in the voracious mouths of the ovens of Birkenau. More than 800,000 new victims were thrown as prey to the Nazi beast during this time. The 60 mouths of hell were constantly devouring at the fastest possible rate.” (p. 106)

As these were not enough “mouths of hell,” two pits had to be opened. But the description is quite original:

“To accelerate the job, they had made two ‘bunkers’ (that name had various usages at the camps), gigantic. Those that worked there describe them as 2 huge concrete pools which had at their edges one Decauville railway track. At the bottom they placed large planks, on which they placed the corpses brought by the rail wagons, which came directly from the suffocation chambers, then a second layer of firewood, new corpses, then a third, fourth and so on, until the pit was full. They sprinkled everything with plenty of gasoline, and they set fire. Each bunker, which was divided into 4 compartments, could hold more than 500 bodies. The flames could be seen from many kilometers away. When someone would first see the fire, he would think that the forest around the macabre place was on fire. That time, spring of ’44, there was a shortage of Zyklon (the asphyxiant gas) for 2 weeks. During that time, they would throw the victims alive into the flames.” (p. 107)

This description is also totally at odds with the official version and entirely fictional. The pits that were supposedly used for the cremation of the bodies were just trenches, not concrete structures like a pool (and with compartments!).

In the Preface we read:

“According to Roman justice, to prove a crime two witnesses were necessary. For the crimes of Nazism, the numerous testimonies (18,000 by 1960) replaced the evidence that the perpetrators tried meticulously to eliminate.” (p. 8)

And yet, the more we examine these testimonies, the more we fail to find reliable information regarding the planned extermination of camp prisoners with poison gas. In fact the survivors above who claim to be actually eyewitnesses, apart from their nonsensical statements, contradict both themselves and the official story. What would a Roman judge rule with testimonies such as these?